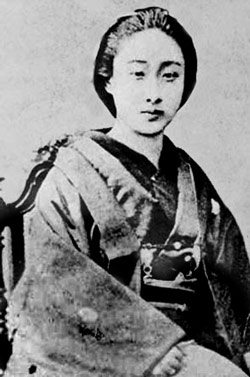 Some criminals live on as legends for many years after their demise. Three of my favorite examples are Bonnie Parker, Clyde Barrow, and Jack the Ripper. I saw the movie Bonnie and Clyde in 1967. Played by Faye Dunaway and Warren Beatty, the outlaw lovers were all the rage.  They made 1930’s depression-era fashion seem cool. At that time Bonnie and Clyde had been dead for 33 years, ambushed and gunned down by law enforcement officers in Louisiana in 1934.

Jack the Ripper has even more staying power. In 1888 he murdered and mutilated some prostitutes in foggy, gas-lit London.  Although (or probably because) he was never caught or identified, he’s still a household name today, 125 years later. He’s the iconic serial killer, the subject of countless books, movies, and TV shows.  One of my favorites is the 1967 Star Trek episode in which Jack the Ripper is an evil, alien entity who travels through time and space on an eternal murder spree.

The Far East has its own cast of legendary criminals with long afterlives. While researching Japanese history for my samurai detective series, I ran across the story of O-Den Takahashi (1847-1879). Some of Japan’s most notorious murderers were female. Because so many used poison as their M.O., Japanese murderesses were referred to by the term dokufu—“poisonous wife,” whether or not their crimes were in fact poisonings. O-Den Takahashi is the iconic poisonous wife.

The beautiful young O-Den married a handsome young man named Naminosuke. It did not go well. First they gambled away all their money. Then Naminosuke got leprosy. To pay for his medical treatment, O-Den prostituted herself to foreigners in the port town of Yokohama. But her husband died.  Some sources say she euthanized him by poisoning him. Then O-Den fell in love with a rascal named Ichitaro Ogawa. They decided to rob one of her rich customers, a merchant named Goto.

On August 27, 1876, O-Den waited until Goto was asleep, then slit his throat with a razor. Unfortunately, she found only a small amount of money on him.  She left a fake suicide note by his body. But the police tracked her down.  O-Den was tried, convicted, and sentenced to death. On January 31, 1879, she and a male prisoner were taken to the execution ground.  She mocked him for his fear:  “Isn’t it just like a man to be so cowardly!  Watch how I go!”

But she lost her nerve at the last moment. She begged the jailers for one last meeting with Ichitaro, her beloved. They refused. The executioner swung his sword at her neck. She moved. The blade cut the back of her head. While she bled and thrashed and called her lover’s name, the executioner hacked through her neck as if cutting a daikon (giant radish).

O-Den was the last woman in Japan to be executed by decapitation. (Her botched, gruesome death was one reason that the Japanese authorities decided that hanging was a cleaner, more foolproof method.)  But this wasn’t the last that was seen of O-Den. Several months after her death, her corpse was autopsied. Her female organs were preserved in formaldehyde. This was around the same time a play about her opened at a Kabuki theater in Tokyo.  All roles in traditional Kabuki theater are performed by men. O-Den was played by the actor Kikugoro V.

Fast-forward to the twentieth century. After World War II, the Ministries of Health and Welfare, Labor, and Education, the Japan Teacher’s Union, and the Tokyo Metropolitan government staged an exhibition at a Tokyo department store. One of the items on display was the jar of organs saved from O-Den’s autopsy. I don’t know what the other items were, but I bet they couldn’t hold a candle to O-Den’s pickled innards.

Fast-forward again to 1958.  Japanese director Nobuo Nakagawa released a movie based on O-Den’s life: Dokufu Oden Takahashi.  The scriptwriter added some colorful plot twists, including  a casino heist and a love triangle with O-Den, a cop, and a vice kingpin. And that wasn’t her only stint as movie material. In 1983, director Shogoro Nishimura recycled her into his erotic film Koyamu, about a woman who loved too much and committed crimes in order to support her husband. To give you an idea of what this movie is like, other films of his include Gate of Flesh and Woman with Pierced Nipples.

Never heard of O-Den Takahashi? Neither had I, until Mark Schreiber sent me a copy of his wonderful book,  The Dark Side, Infamous Japanese Crimes and Criminals, published by Kodansha International in 2001. (Read it for more great true-crime stories.)  But O-Den Takahashi is still a household name in Japan today. And even though she isn’t as famous in the West as Bonnie and Clyde or Jack the Ripper, her afterlife is longer than theirs and arguably just as remarkable.

Laura Joh Rowland is the best-selling author of the mystery series set in 17th century Japan that features samurai detective Sano Ichiro. Her sixteenth and latest book in the series is The Incense Game (September, 2012) The Shogun's Daughter will be released in late September, 2013.

For a serial killer who enjoys provoking headlines, the greatest irony is that true fame requires being caught, and make no mistake—they do not wish to be caught. A few killers have managed to capture public imagination anyway. Jack the Ripper and the Zodiac Killer have each inspired numerous books and movies. Theories about their…