My phone didn’t have a single bar of reception.

Logic said this was because my phone was notoriously unreliable and the forested hills were blocking any nearby towers.

But when you’re walking into Point Pleasant, West Virginia for The Mothman Festival and come face to face with the giant gleaming statue of the red-eyed beast himself, cold logic can go hang.

The weekend was all about the unexplained and the mystifying; the cold tingle across your neck when you hear a noise in the middle of the night; the belief that there are some things hard science will never be able to fully disprove.

Given some of the wild theories being bandied about, blaming faulty cell phone reception on a monster wasn’t all that strange.

Point Pleasant isn’t the sort of town that has much to draw in visitors. There’s a lovely nature preserve, yes, but very little that screams tourist trap. So is it any wonder that the tiny town on the very edge of West Virginia has embraced its one true claim to fame? September 20th and 21st of this year marked the 13th Annual Mothman Festival, commemorating a series of events that—honestly—some people would probably rather forget. For many, the strange sightings at the TNT factory only heralded personal strife and terror.

On November 15th, 1966, two young couples were driving through an abandoned area on the outskirts of town that had once housed munitions factories during World War II. All seemed quiet and normal—until a winged figure appeared in the darkness, over six feet tall with giant glowing red eyes.

Acting sensibly, the foursome took off back to town, hitting a hundred miles per hour on the highway. The ‘Bird’, as it was initially dubbed in the papers, effortlessly kept pace with the speeding vehicle, only breaking away at the town limits.

The outcry was immediate. Soon hunters were pouring into the area, armed to the teeth and ready to bag themselves a monster. But the ‘Bird’—more commonly known now as the Mothman—wasn’t the only strangeness to hit Point Pleasant that year.

UFOs were sighted nightly, of varying colors, shapes, and sizes. The witnesses weren’t merely young pranksters or the town drunks: practical housewives, serious journalists, and farmers who didn’t think much of flights of fancy reported the lights and crafts.

Some, like the colorful Woody Derenberger, even met the strange beings from those ships. They had unusual names like Indrid Cold and told their new human friends of things that had not yet happened—but would. Assassinations, natural disasters, and even more mundane details of daily life, all impossibly delivered before the events came to pass.

Animals began disappearing or turning up in fields mutilated. The town phones started acting up, ringing constantly. But when the receivers were picked up there would be only loud beeps or shrill static. Or perhaps a stranger speaking quickly in a foreign language…

And then they arrived: the strangers, mostly men, in black. They wore clothes long out of fashion. Drove older model cars in pristine condition. Spoke oddly, either in stilted, stuttering English or in a high-pitched singsong style.

They looked human but there was something… off about them. Something about the ears, perhaps. They had pointed faces. Unusually long fingers. Dusky complexions. And they asked all sorts of personal questions of those who had sighted unusual things.

Some thought these strangers were from the government, sent to cover everything up. Others thought they were the people traveling in all of those pesky UFOs. And some, like author John Keel (who later went on to write the best-selling book The Mothman Prophecies), thought they were something else entirely: beings that only occasionally shared the same space and time as humans, people who were often as invisible to the naked eye as UV radiation or gravity.

For thirteen months exactly, Point Pleasant was a hotbed of paranormal and unexplained activity. And then, on December 15th, 1967, everything came to a screeching halt when the Silver Bridge collapsed. Forty-six people died in the disaster, which made national news, and it was widely believed that the Mothman had been a harbinger of the catastrophe.

He was never seen in the area again, after all. Perhaps he had been drawn to the town the way light attracts normal moths. With all of the energy disappearing in the wake of the bridge collapse, there was nothing left to hold his attention.

We’ll probably never know what the Mothman really was, where the UFOs jetted off to, and who those pesky men in black were working for. But the impact they had on the area and the collective imagination is undeniable.

John Keel’s book became a New York Times best-seller. It was later turned into a thriller starring Richard Gere and Laura Linney. Even the men in black got their own comic series and movies.

And now, 47 years after the collapse of the Silver Bridge, Point Pleasant continues to memorialize the strangeness with its yearly Mothman Festival.

I first learned of the Mothman’s story through the Richard Gere film. When I discovered there was an actual festival devoted to this cryptid, I swore that I would go one day. And this year, I finally got to scratch that off my bucket list.

Joined by my likeminded, equally cryptid curious friend Jolene Robbins, I braved the winding drive into West Virginia. Point Pleasant is situated in a very picturesque area along the Ohio River, with rolling wooded hills all around. It’s not difficult to imagine odd goings-ons in such a rural landscape.

The festival itself was a relatively simple affair. Three rows of tables where artists displayed their wares, authors advertised their books, and local associations offered treats in exchange for donations. The typical food trucks you see at every carnival. A zipline was set up down the main drag. The allegedly haunted Lowe Hotel was offering a tour. Live bands played on the amphitheatre stage down by the river.

Everything you’d expect at a small town festival.

But there was that unsettling statue on 4th Street. Right around the corner, the world’s only Mothman Museum was celebrating its grand re-opening after moving into more spacious accommodations—the museum houses newspapers detailing the events of ’66 and ’67, Mothman toys and comics from around the world, and props from The Mothman Prophecies film (I particularly liked how they had John Klein’s ChapStick in a shadow box). Men in black suits wandered through the crowd, waving people on and yelling at those who stared too long at them.

Then there were the guest speakers…

In the dilapidated State Theatre, a variety of cryptozoologists, ghost hunters, and paranormal experts spoke throughout Saturday and Sunday. Nick Redfern discussed his experiences while traveling the globe in search of unknown creatures. Prominent UFO researcher Stan Gordon explained his theories on interdimensional beings: how monsters, ghosts, and aliens might actually exist on a different plane than ours, only occasionally slipping through the cracks to be sighted. Prolific author Rosemary Guiley spoke of ghosts said to haunt the highways and rivers of West Virginia.

While some of the speakers were less credible than others—the extremely colorful Fred Saluga clomped onto the stage in suspenders and a trucker hat before announcing, “I’m gonna tell y’all about Bigfoot!”—there was no denying the passion in the air. Everyone at the festival was there because they believed there are things in this world that have yet to be classified or properly studied; that there’s more than the mundane, rational surface most see.

Personally, I hesitate to say I believe everything being discussed that weekend. Some things are just too big to swallow without skepticism—but I share the opinion the speakers had: that there are plenty of mysteries left to be solved. When so many people around the world report such similar, strange things, there has to be something behind it all.

Besides: sometimes you’ve just got to let your hair down (figuratively, in my case) and talk shop with likeminded characters.

There was an abundance of horror movie t-shirts and multicolored hair on display. Zombie toys and dead insects in glass boxes for sale. A man in a well-made rubber Mothman costume was happy to pose for photographs.

For someone with a fondness for the macabre and mysterious, it was frankly a dream come true. A weekend-long celebration of the weird and frightening, where people could discuss Nessie and werewolves in earnest tones while sipping lemon shakeups. Jolene and I garnered many compliments for our colorful looks and healthy interest in folklore, as well as invitations to return next year and participate in an investigation of the TNT area.

Perhaps after the 14th Annual Mothman Festival, I’ll report back with a firsthand account of whatever still lurks in the Mothman’s old stomping grounds… 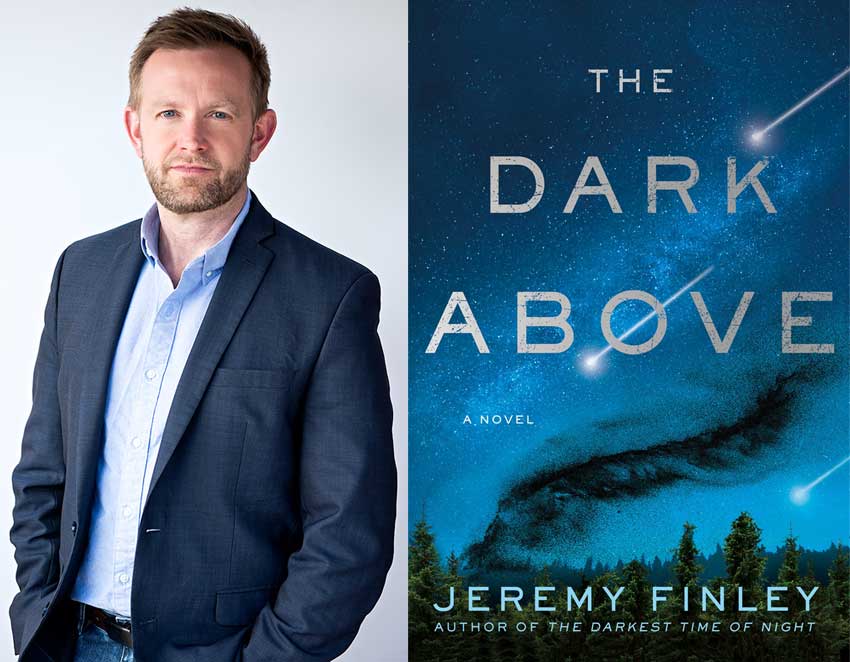 Interview with Jeremy Finley, Author of The Dark Above

Weston Ochse, author and Bram Stoker Award winner, sits down with Jeremy Finley to discuss his background as an investigative reporter in Nashville, getting inside of the head of your characters, breakneck pacing, aliens, and the worst puppy on the planet. Learn more about Jeremy’s new book, The Dark Above, and comment below to enter… 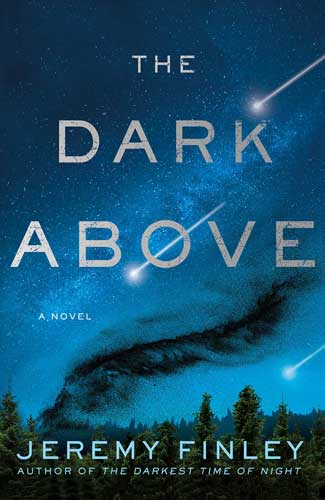 Book Review: The Dark Above by Jeremy Finley

In this sequel to the critically-acclaimed novel that grabbed fans of X-Files and Stranger Things, Jeremy Finley returns with The Dark Above, another thriller full of aliens and government cover-ups. Aliens are attacking Earth in The Dark Above by Jeremy Finley, and their most dangerous weapons are human beings. Some people grow up social media… 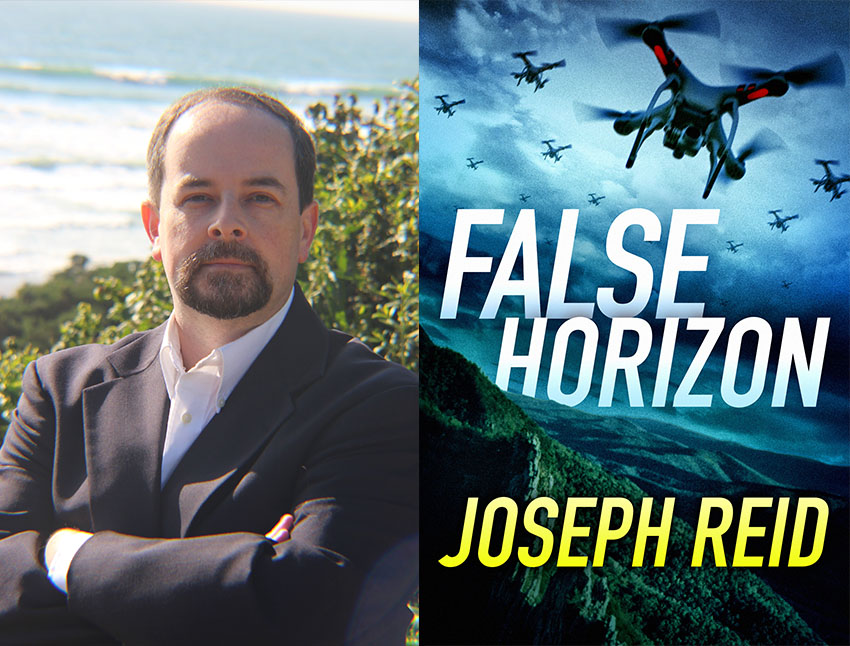 Joseph Reid is the author of Takeoff, which introduced air marshal turned investigator Seth Walker. The son of a navy helicopter pilot, Reid was a marine biologist before becoming a patent lawyer who litigates multi-million-dollar cases for high-tech companies. He has flown millions of miles on commercial aircraft and has spent countless hours in airports… Review: The Return by Joseph Helmreich

The Return by Joseph Helmreich will appeal to anyone who has ever wondered … what’s out there? What begins as an astrological fluff piece for a local news station—a lunar eclipse on the winter solstice—becomes an international sensation when renowned physicist Andrew Leland is pulled into the sky by a strange green light. It’s the…