Whenever I complain about the misogyny in a James Bond film, I'm inevitably told: “What do you expect? It's Bond.”

The fact that this is said so matter-of-factly—it's often delivered in a condescending tone of voice, as if my outrage is unreasonable—is appalling. An entire series of movies shouldn't carry such a reputation like a badge of honor, as if it's perfectly normal and unsurprising.

This just proves how deeply ingrained misogyny is in our society. It's seen as a natural state of being, rather than the true imbalance of power it really is.

I shouldn't have to point out that a man forcing himself on a lady is horrific rather than sexy or masculine; or that coercing a woman into doing something she's uncomfortable with is deplorable.

And just because James Bond is “the world's greatest spy,” that doesn't mean he should be let off the hook when he does disgusting shit. His defense squad can cry all they want about how he does questionable things in the name of the greater good/to save the world/to protect Queen and Country—I'm still going to call a bastard a bastard when he acts like one.

So here are the worst twelve Bond flicks, ranked once again by how decently the ladies in each story are treated: Tomorrow is a teeter-totter, really: on the one end, they kill Paris off as soon as she sleeps with Bond, to prove her hubby is evil and to give our hero angst. But on the other, we've got Wai Lin, who's a total superspy in her own right, and more than a match for Bond or the baddies.

Plus, she helps him save the day by taking down a stealth ship with both hands full of machine guns. Wowza! But of course, Bond changes her mind with his awesome sexual prowess (*eyeroll of epic proportions*), and when they're captured by the baddie, he, of course, makes her don a skimpy red bikini number. Because no matter how competent a lady spy is, she's ultimately reduced to a physical object to oggle at and paw over.

10. From Russia with Love The Bond: Connery
The Bond Girl: Tania, a KGB operative

Bond does the “fake married” trope with mixed results. He's physically and verbally rough with Tania, who's just following orders and truly doesn't know what's going on. One of the primary baddies in this, Rosa Klebb, is a very capable lady, who certainly knows her way around an evil plot—and has killer taste in footwear.

But then there's a scene where Bond is “given” two Roma girls for the night because he stopped their fight to the death/saved their camp from SPECTRE assassins. This one gets points for Aki, who's a competent, badass spy, and saves James more than once in her fast white convertible.

This one loses points for killing Aki off with poison just because she was sleeping next to Bond—and let's not forget that disgusting bit where they “turn” Bond Japanese so he can go undercover. Who ever thought that was a good idea? 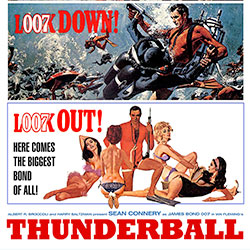 Bond's female CIA ally, Paula, is captured by Largo, tortured, and kills herself before she can be rescued. The spy's primary paramour, Domino, is found out when she tries to help him and is subsequently tortured herself.

Baddie Fiona ends up shot by her own men while she and Bond are dancing, when he purposefully puts her in the path of the bullet; yes, she's a baddie who had it coming, but it's still disquieting how many women die after sleeping with James Bond.

At least Domino escapes, harpoons the evil Largo, and lives to see another day…which I ironically brings me to #7: Jinx is a competent spy, Miranda a competent traitor. But I just can't, in all good conscience, rank this movie higher on the list because: The Bond: Moore
The Bond Girl: The eponymous criminal

Everything about this film is an “UGH!” from me. We're supposed to believe Octopussy got her nickname from her father (totally a normal name for a father to give his daughter), Louis Jourdan is supposed to be a Middle Eastern baddie, and Bond puts on clown makeup at one point. That first name makes me want to punch someone in the teeth; of course she ends up thrown out a window while naked, and then later drowned in a pool for absolutely no reason. The second woman, the main Bond girl, is literally called a “twit” by Bond when she tries to help and makes a simple mistake.

The redeeming bit of this one is the obviously gay duo, Mr. Wint and Mr. Kidd, who are at least amusing and semi-effective at their evil jobs.

04. The Man with the Golden Gun Not even having the late, great Christopher Lee as the baddie redeems this stinker: Andrea ends up shot dead, but not until she and Bond have sex after he shoves the other Bond girl into the closet to hide. What a gentlemen that James Bond is. The whole movie is just him treating Goodnight deplorably and belittling her at every turn. The first woman ends up eaten by dogs purely because she made the mistake of sleeping with Bond; the second has an absolutely awful name and has to play second fiddle to Bond in space, even though she's the qualified astronaut.

The one redeeming moment of this film is when henchman Jaws switches sides because he finds love. Bond tricks Solitaire into sleeping with him by making her believe her magical Tarot deck has foretold it—as soon as the deed is done, she's sobbing about how she's now lost her magic (I cannot BEGIN to describe how much I hate “men taking women's power through sex” stories) and will be killed by her boss.

This one is also the first to feature a drug kingpin as the baddie—the fact that he's also the first black baddie does not escape me. Plus, there's a southern sheriff shouting racist epitaphs everywhere. *Side-eyes everything* Truly, Pussy has the most awful Bond girl name—only #6's comes close—and Bond practically rapes her in a barn. Jill is murdered moments after sleeping with him; her sister Tilly's mission for revenge ends with her death, when she makes the mistake of crossing the spy's path, too.

It's just horrible, unpalatable stuff happening to ladies left and right. Hell, in the first five minutes, Bond smacks a woman's bum and tells her to run along because it's time for “man talk”—talk about warning signs and inducing a girl's gag reflex.

It's no surprise that most of the films listed here are the early ones. Misogyny has never been okay, but it was certainly more excused in the 60s and 70s. I'm desperately crossing my fingers that the next decade's installments will only get steadily more progressive—and sincerely urge everyone to be more vocal about these issues.

If we don't speak out, things won't change. And we are better than this, people! We can and should expect more from our entertainment, which should be—GOSH!—more entertaining than upsetting.

It's a novel concept, I know, but when I watch something escapist, I'd like to actually escape some of the issues, worries, and concerns I have to face in my day-to-day life.

If other action heroes—like Jason Bourne, Ethan Hunt, and Illya Kuryakin, just to name a few—can treat the ladies they encounter with respect, then I don't think it's too much to ask that Bond, the quintessential action hero, learn how to do the same.