May 16, 2019
GIFnotes: Giving you the basic plot summary of an upcoming book with the help of the Graphics Interchange Format. 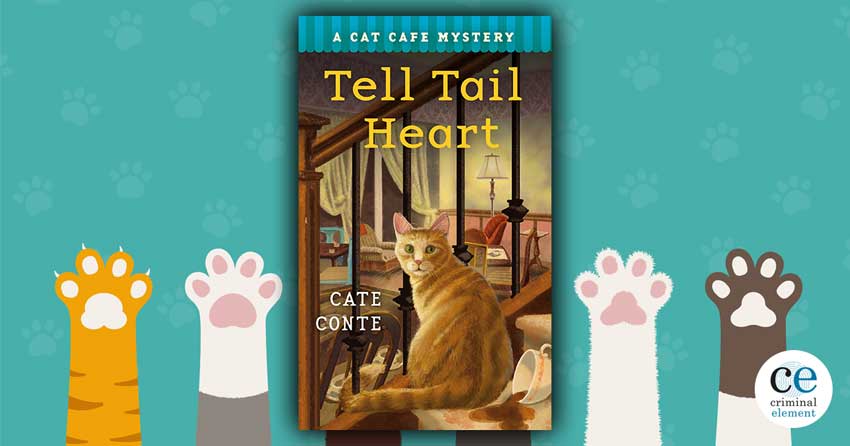 Tell Tail Heart by Cate Conte is the third book in the Cat Cafe Mystery series, where Maddie James’s cat café is at risk of becoming a crime scene for the purrfect murder—take a visual tour with GIFnotes!

Maddie is hoping to have some downtime during Daybreak Island’s off-season to tackle her to-do list.

Her grandfather’s house-turned-cat-café is under construction, and she’s also scoping out places to open a juice bar on the island.

On top of that, her relationship with adorable dog groomer Lucas has taken a pawsitive turn.

But easy is getting harder every day for Maddie, especially when a big-name writer who’s on the island working on a new project winds up floating in the canal.

This, on the exact same day an eccentric woman shows up at the cafe claiming Maddie’s cat, JJ, is hers.

As the investigation into the dead writer picks up, Maddie realizes that even the neighbors she’s known all her life might be keeping secrets that go deep into the heart of this small seaside town.

Meanwhile, a killer remains at-large … and on the prowl.

This June, Cate Conte—aka Liz Mugavero—launches a new paranormal mystery series for Kensington with Witch Hunt. As Mugavero, she previously wrote the seven-book Pawsitively Organic Mysteries, which launched with 2013’s Agatha Award-nominated Kneading to Die and concluded with Murder, She Meowed (2019). As Conte, she continues to helm the Cat Café Mysteries for St. Martin’s;…