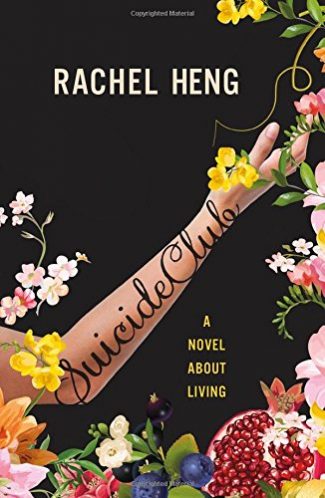 In Suicide Club, Rachel Heng’s debut set in near future New York City―where lives last three hundred years and the pursuit of immortality is all-consuming―Lea must choose between her estranged father and her chance to live forever.

Lea Kirino is a “Lifer,” which means that a roll of the genetic dice has given her the potential to live forever―if she does everything right. And Lea is an overachiever. She’s a successful trader on the New York exchange―where instead of stocks, human organs are now bought and sold―she has a beautiful apartment and a fiancé who rivals her in genetic perfection. And with the right balance of HealthTech™, rigorous juicing, and low-impact exercise, she might never die.

But Lea’s perfect life is turned upside down when she spots her estranged father on a crowded sidewalk. His return marks the beginning of her downfall as she is drawn into his mysterious world of the Suicide Club, a network of powerful individuals and rebels who reject society’s pursuit of immortality, and instead choose to live―and die―on their own terms. In this future world, death is not only taboo; it’s also highly illegal. Soon Lea is forced to choose between a sanitized immortal existence and a short, bittersweet time with a man she has never really known, but who is the only family she has left in the world.

The cake was a huge, tiered thing, painted with buttercream and decked with tiny red flowers, floating on a glass pedestal in the middle of the crowded room.

No one talked about it, or even looked at it. But every now and then, someone would linger a little too long by the drinks table, pretending to assess the various bubbly greens on offer while peeking at the cake out of the corner of their eye. Todd stood dutifully by Lea’s side, a slender flute of pale cordial in hand.

“Lovely party,” he said, nodding as if someone had asked him a question. He beckoned at her with his glass. “Great drinks. I’m really enjoying the Spirulina Spritz.”

Lea smiled absently. Her eyes flitted over the crowd, taking in the navy dresses and delicate silver jewelry, the tasteful suits in varying shades of gray. The flowers on the cake stood out like pinpricks of blood in an otherwise bloodless room. Even the bronzed faces, framed by shiny locks, so well hydrated and even-boned, seemed gray to her.

“There they are! My favorite couple.”

Natalie delivered her air kisses with the forbearance of a celebrity deigning to have their picture taken. First to Todd, then to Lea, careful not to actually touch their cheeks.

“You look—wow—great,” Todd said, still nodding. Lea suppressed the urge to grab his head and hold it still.

She did look great, though. Her sheath dress shimmered in the candlelight, shadowy indigo. It looked as if Natalie had been poured, a creamy, fragrant liquid, into the sleek dark length of it.

Lea flashed a smile, mentally cataloging her own appearance. She measured her straight black hair against Natalie’s glossy brown curls (Natalie’s was more luscious, more full of life), the burnt umber of her skin against Natalie’s pale, freckled visage (prone to UV damage and melanoma, so here Lea had a clear advantage). Natalie’s face was angular and long, which, together with her large front teeth, gave her an equine aspect. Lea, on the other hand, had never lost her baby fat and her cheeks remained full and plump, lacking in angles altogether. It was something which had bothered her as a girl but that she prized today. As with most lifers around the same age, their bodies were as similar as their faces were different, nearly identical in stature and muscular tone.

“Please,” Natalie said. “Don’t patronize me. Can you see these lines?” She pointed to one smooth, rouged cheek. “I know you can, so there’s no need to be polite. I’ve had the worst week, just the worst, must have taken at least three months off my number. But I don’t want to talk about it.”

She pressed her lips together. It was evident that she did, in fact, very much want to talk about it, but no one said anything.

“Lea!” she said suddenly. “Tell me all about you! You are naughty, always keeping things to yourself.” Natalie glanced coyly at Todd.

“Trust me, I’d love to have some secrets. But with friends like you…”

They burst out laughing. Todd laughed too, right on cue. Their laughter was rich and cascading, a golden ribbon unfurling through the party, making people turn to look, people who were until then perfectly secure of their position in life but at that moment felt something was missing.

More friends arrived to join the group, and the flirtatious barbs continued. Lea was up for a big promotion, which she made sure to slip in casually while complaining about how much more work she was getting. She felt the information sink in and waited for the reaction it would generate. Sure enough, Jasmine jumped in with a cautionary tale about how promotions tended to turn co-workers against you; after all, that was what happened to her when she was the first lifer at her firm to get to director level before she hit a hundred.

The conversation fizzled, and they cast their gazes about, looking for a new topic. Some pulled out their tablets.

“So,” Natalie said, lowering her voice conspiratorially. “Have you seen it?” She tossed her hair, the lush ringlets giving off the faint scent of coconut. Her neck was firm and smooth. Like the flank of a racehorse, Lea thought.

Natalie rolled her eyes, pushed her shoulders back. Her left shoulder, Lea noticed with satisfaction, was slightly lower than the right. Lea drew herself up to her full height as well, glad that her sleeveless silk top showed off the definition of her upper arms, the symmetry of her clavicles.

“The video, of course,” Natalie said.

No one looked up from their tabs, but Lea felt the air freeze. She saw the man’s eyes, hard and shiny, pupils perfectly opaque, like a fish. His mouth, filling up with heat and fire, melting into brown and black and red, flesh vanishing into smoke and flame.

“Oh, God,” said a tall man with poreless mahogany skin. He sipped on his vitamin spritz and shuddered. “Can we not talk about that again, Natalie?”

“What? We know everyone’s thinking about it,” Natalie said.

“They’re sick,” someone else chimed in.

“Right! Just think about what it does to cortisol levels.”

“Pure spectacle, that’s what it is.”

“And to do it like that. I feel nauseated just thinking about it.”

Suddenly Lea could smell it—the acrid burn of flesh, the eye-watering sting of smoke. The man’s eyes, filled with a hard, unfamiliar conviction, a deep sadness. Something inside her lurched. Revulsion, she told herself. Shock.

Everyone was looking at her now.

“Oh, yes, Lea,” Natalie said, eyes wide with concern. “Now that Todd’s mentioned it. How are your vitamin D levels, darling? I can recommend a clinic, you know, if yours isn’t quite up to the mark.”

“Perfect, actually.” Lea smiled, ignoring the barely veiled insult. “And no, thank you. I would never leave my Tender. Jessie and I go way back—she was assigned to our family when my mother made senior VP.”

“Of course,” Natalie said. She pressed her lips together and turned back to the others.

It won’t kill you to be nice. At least try.

I am, Lea thought. I am trying. Irritation flared in her belly. She saw her mother’s face, the lines emanating from the corners of her eyes. Then she heard her voice in her head again: Wrinkles are caused by the loss of elasticity in the skin, a consequence of wear and tear that can be delayed, but not eliminated, by RepairantsTM.

Ever practical, her mother. Even after she’d been dead for thirty years. Her spine had remained upright till the very end, her downy hair as black as it had always been, kept neatly cropped close to her skull by monthly visits to the salon. Her skin retained its elasticity far better than some of her lighter peers, who had withered decades earlier. Her muscles stayed firm, her feet smooth and well-groomed, her mauve lips full. Such were the benefits of being the CEO of Talent Global and having access to Tier 4 treatments.

Don’t waste it. I gave you everything. Everything your brother couldn’t have. Her mother’s voice was quiet now, but Lea heard in it the ache that always made her snap to attention, that threatened to open up the wound that the decades, so many of them, could not heal.

She looked around the room at the sleek, glossy haircuts, the smooth foreheads and ramrod spines. The beautiful, wealthy, life-loving people conversing in low voices, politely laughing and clinking glasses from time to time. She took in the premium vitamin spritzes, the fine crystal flutes, the high ceilings and expansive view of the city down below. The space she had rented for the party was usually reserved for corporate functions, but select employees at the Healthfin fund she worked for were able to book it for special occasions.

No, she hadn’t wasted anything, Lea thought. Her mother would surely have been proud.

The room burst into thunderous applause. Cameras flashed. Lea smiled the way Uju had told her to eighty-eight years ago: Your eyes, make sure to use your eyes, or it looks like you don’t mean it.

She picked up the knife and sliced into the bottom layer of the cake. The Styrofoam gave a high squeal when the plastic blade went through it, but even as she winced inwardly, Lea never let the smile leave her face.

Rachel Heng’s fiction has won Prairie Schooner's Jane Geske Award and was nominated for a Pushcart Prize. An extract from Suicide Club was included in The Huffington Post's "15 Stellar Short Stories You Can Read Online" list. She graduated from Columbia University with a BA in Comparative Literature & Society and Economics and is currently a James A. Michener Fellow at the Michener Center for Writers, UT Austin.