Stories Behind Our Names

September 13, 2021
Every person has a name. And every name has a story behind it. Tori Eldridge, author of The Ninja Betrayed, joins us to discuss how names can spark ideas, drive plot, and reveal our personality, history, and heritage. 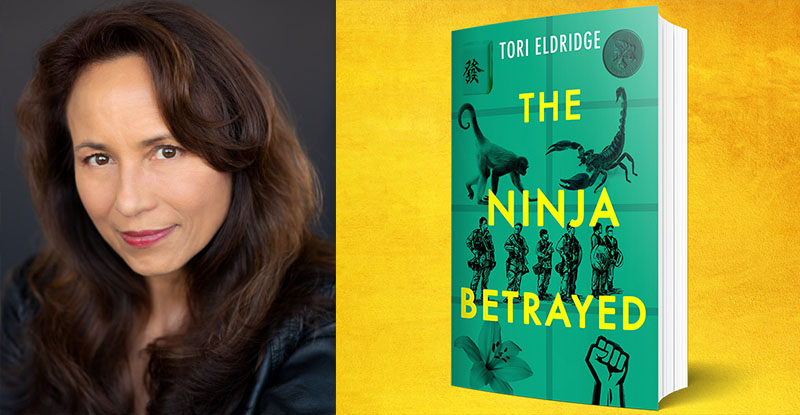 My name is Tori—not the diminutive of Victoria, but an adaptation from the Viking god of thunder. If I were a character in your story, the origin of my name might reflect my personality and guide my mission. Whether you created me as Thor’s Earthly descendent with yet-to-be-discovered magical powers or a feminist hero battling corporate injustice, the story behind my name would add another layer of depth to your character’s personality and actions.

Nicknames and abbreviations reflect just as much. A Tori shortened from Victoria might prefer speed skating to tea parties or trendy nightclubs to philanthropic societies. She might yearn to stand out in school or have suffered through a childhood with parents too harried to bother with a four-syllable name.

Whether fictional or real, the names we appoint, claim, or inherit reveal secrets about our personality, history, and heritage that can spark ideas and drive a plot. What new book or character might the origins of your own name inspire?

My parents met and married in Tokyo where they became close friends with a Norwegian shipping mogul based in Japan. His first name was Thorleif. They asked him to become my godfather, and I was named for him. From what I’ve been told, he wielded considerable power, so it doesn’t surprise me that my ambitious young father from a poor North Dakota Norwegian upbringing would view the wealthy shipping mogul as a mentor. Nor does it surprise me that my godfather, who had a wife in Norway and a mistress in Japan, would be impressed with my father’s beautiful Hawaiian Chinese wife.

My writer imagination is sparking already, but I have more of a background story to share.

Had I been a son, my parents would have named me Thor and—I would hope—have equipped me with the appropriate Thor hammer teething ring. Naming a daughter wasn’t quite as easy. The first girl’s name they considered was Turid, from the Old Norse language combining thunder god and beautiful beloved. Although powerful, the name would have confounded my teachers and sparked unfortunate nicknames from my classmates. My parents settled on the easier to pronounce Tori for me, but what kind of life would Turid have lived?

And these are only the origins of my first name. I have more stories and family history connected with my Chinese middle name—meaning Tinkling of Beautiful Bells—my Anglo-Saxon married surname, and my maiden name of Brenno, which I’m told was invented by an immigration clerk who couldn’t spell my ancestor’s actual surname and wrote down a bastardized phonetic spelling of the tiny island in the Fjords from which he hailed. The island had a famous strong man, worthy of his own short story. Which, of course, is the point of my essay.

Every person I meet in real life has a unique and revealing history behind their name. The same is true for my favorite crime fiction characters.

What does it say about Tracy Clark’s Cassandra Rains that she goes by Cass but never Cassie? How does S.A. Cosby’s complicated former-criminal protagonist go from Beauregard to Bug, and what was the story behind his grand and beautiful given name? Although authors may or may not disclose this information in their books, they usually have profound reasons for the names they choose. They also frequently have full names for their characters their readers will never know.

The hero of The Ninja Betrayed, book three in my Lily Wong mystery thriller series, has a name as layered and complicated as you would expect from a biracial modern-day ninja. Her full name, which I have never disclosed in any of the books, is Lily Yong Shing Wong. Every piece of that name carries emotional baggage drawn from family history, beginning with Lily’s mother and her relationship with her parents in Hong Kong.

As is so frequently the case, my character’s present is informed by her past.

Lily’s mother was saddled with a subservient Chinese name she had always hated. Since Hongkongers tend to also have English names, Lily’s grandmother called her child Violet after the flowers the girl loved. When Violet had daughters of her own, she named them Lily and Rose. Violet doubled down on her non-conformist independence by giving Lily the middle name Yong Shing, meaning Courageous Victory, that both Gung-Gung and Po-Po (Lily’s maternal grandparents) believed was far too forceful for a girl. Instead, they call her Lei Lei, a childish nickname that feels less endearing and more diminishing the older Lily becomes.

While the stories behind her first and middle names offer clues to a strong and rebellious woman, Lily’s Chinese surname unlocks the source of her complicated family dynamic.

As explained in The Ninja Daughter, Lily’s mother was supposed to graduate from UCLA with a business degree and return to Hong Kong where she would attract a husband willing to take her father’s name and inherit his international finance business. Instead, Violet fell in love with an agricultural student from North Dakota, ruined her father’s plans, and left him without a son to perform ancestral duties for him when he dies. In an attempt to repair family relations and reinforce ethnic heritage, Lily’s father gave his daughters the Wong family name. Now the filial duty to appease Gung-Gung’s future ghost has fallen onto Lily.

Duty, love, sacrifice. Betrayal, rebellion, courage. The emotional baggage in Lily’s name is almost as heavy as the grief she carries for her murdered sister. All of it informs her character and motivates her actions.

Then again, a snappy name with a monosyllabic punch might be all an author needs to create the next iconic protagonist.

How about you? What are the stories behind your names?

About The Ninja Betrayed by Tori Eldridge:

Things get personal for Chinese-Norwegian modern-day ninja Lily Wong in Hong Kong when she dives into the dangerous world of triads, romance, and corporate disaster during the height of the pro-democracy protests.

Lily’s mother has been summoned by her grandfather, Gung-Gung to attend an emergency board meeting. Lily is happy to take her father’s place for exotic travel, family reunions, and romantic dates with her new boyfriend, Daniel Kwok, who’s there for business. Lily and her mother stay at her grandparents’ hillside home on Hong Kong Island, but tension between Gung-Gung and Ma makes it hard to enjoy the beautiful surroundings, especially with the city in turmoil. Gung-Gung won’t say anything about the meeting and Ma is worried that her career is in jeopardy. Meanwhile, the teenage daughter of Gung-Gung’s driver is pulled into the dangerous riots.

As Lily and Ma discover shaky finances, questionable loans, and plans for the future involving them both, Lily’s escalating romance with Daniel puts her heart at risk. Will her ninja skills allow her to protect her mother, the family business, and the renegade teen while navigating love, corporate intrigue, and murderous triads?

Tori Eldridge is the Anthony, Lefty, and Macavity Award-nominated author of the acclaimed Lily Wong series: The Ninja Daughter, The Ninja’s Blade, and The Ninja Betrayed (out 9/14/21). Her short stories have been published in horror, dystopian, and other literary anthologies, and her narrative poem appears in the inaugural reboot of Weird Tales magazine. Tori’s screenplay The Gift earned a semi-finalist spot for the Academy Nicholl Fellowship. Before writing, she performed as an actress, singer, dancer on Broadway, television, and film. Tori holds a fifth-degree black belt in To-Shin Do ninjutsu and has traveled the U.S. teaching ninja martial arts and women’s empowerment. Visit her website at https://torieldridge.com.