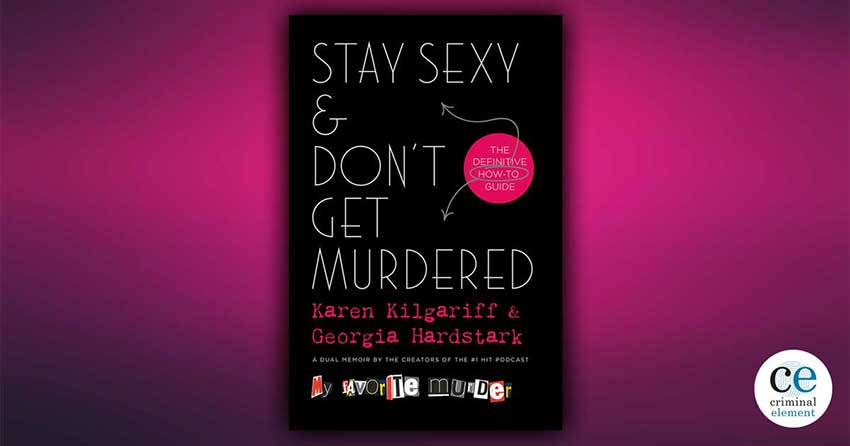 Stay Sexy & Don’t Get Murdered is the highly anticipated first book by Karen Kilgariff and Georgia Hardstark, the voices behind the #1 hit podcast My Favorite Murder!

Little girls are taught to be polite, to smile pretty and sit up straight, to be nice and accommodating. And then those little girls turn into grown-ass women who’ve spent years being polite to the detriment of their own wants, needs, and safety. Having been one of those little girls who was taught those rules myself, I’m f*cking sick of it. So how’s about we kick things off with some thoughts on one of our favorite Murderino battle cries: “F*ck politeness.” F*ck the way we were socialized. F*ck the expectation that we always put people’s needs first. And while we’re at it, f*ck the patriarchy!

If you’re into podcasts, true crime, and mouthy ladies, chances are good you’ve heard of My Favorite Murder. Over the past three-ish years, it’s exploded into one of the most popular/downloaded/streamed/talked about podcasts out there.

The MFM set-up is pretty basic. In every episode, California pals Karen Kilgariff and Georgia Hardstark tell each other about a particular crime (usually a murder, but sometimes it’s a disappearance or an “I Survived” or weird event). There are plenty of tangents, pop culture asides, and personal recollections thrown in, so it’s never straight forward or polished like more scripted podcasts. It’s just a pair of ladies discussing awful things with heart and dark humor, “sitting crooked and talking straight,” as the old aphorism says.

And it’s struck a helluva cord. MFM’s coined a bevy of catchphrases: “Don’t go into the woods.” / “You’re in a cult, call your dad.” / “Sweet baby angels.” / “Toxic masculinity ruins the party again.” Merchandise and worldwide live shows abound. The passionate fans call themselves Murderinos. And every episode closes with the show’s signature line:

“Stay sexy and don’t get murdered.”

That’s become more than a cheeky quip. Given how often women are the victims in the stories Georgia and Karen tell, MFM isn’t just a true crime comedy podcast: it’s also a feminist rallying cry that calls out society’s ills, disgusting double standards, and the dangers of misogyny and racism.

MFM shines a light on how broken the legal system can be when rapists and murderers walk out of prison after only a handful of years, and it reassures the survivors and listeners that it is never the victim’s fault. Frequently, Georgia and Karen share their lived experiences and advice with their fans.

And now their dual memoir/advice book Stay Sexy & Don’t Get Murdered gives us even more of their earthy, practical, profanity-laced wisdom.

GEORGIA: Fucking politeness can be super awkward and uncomfortable or make you feel like a dick. How do you get over this and do what’s right for you despite that?

KAREN: Let’s be clear: the idea of fucking politeness isn’t about standing on a corner shouting, “Fuck you!” to anyone passing by. It’s a strategy for when someone tries to invade your space somehow. They started it. They’re the dick here. You’re just fighting fire with fire. You don’t care what a dick thinks about you. They rely on that fear of judgment to keep you in their control. I always think it’s good just to say what you’re thinking aloud. Some guy comes up to you on the street and starts asking a bunch of personal questions, you can say to him, “Whoa, this is weird behavior. I don’t know you at all. You seem like a predator. Goodbye.” If he gets mad and yells, “Bitch!” at you, that doesn’t mean you’re a bitch. It means you were right.

One of the absolute greatest things about MFM is how utterly honest Georgia and Karen are. In Stay Sexy & Don’t Get Murdered, they hold nothing back. Georgia talks openly about going to rehab for meth as a teenager and her struggles with an eating disorder; Karen discusses the dangers of alcoholism and her mother’s terrible descent into Alzheimer’s.

Both ladies are vocal advocates for therapy and self-improvement, and not just in a “go do yoga and drink kale smoothies!” way. They’re forthright about the nitty-gritty of mental health and building positive relationships, de-stigmatizing depression and chemical dependence and anxiety at the same time.

It may seem odd that someone with severe anxiety would be so passionately interested in true crime, but as Georgia explains:

Anxiety had been a very real, very problematic part of my life long before I stumbled upon true crime. I was already lying awake in bed at night, paralyzed with fear: worry that something awful would happen to my parents or my siblings or my cat, worry about the future, about being made fun of at school, about car accidents and what-ifs… those things kept me up at night already, true crime or not.

There was something so satisfying about getting confirmation that the world wasn’t as great as Happy Days or Mr. Belvedere made it out to be. It didn’t take the anxiety away, but it still felt like a f*cking triumph. I was a child, and I wanted to know about every bad thing that’s out there so I could prepare myself for the worst, and what the hell is worse than a child murderer?? Literally nothing. Not. One. Thing. I didn’t just want to feel the thrill of fear or the satisfaction of validation, my survival depended on my knowing about crime.

Ann Rule even says in The Stranger Beside Me that her ultimate goal was “to warn women of danger, and hopefully save their lives with some bit of advice or caution they read in my books.” I was determined to glean as much of that advice and caution as humanly possible.

I was going to arm myself with knowledge.

Stay Sexy & Don’t Get Murdered is exactly what you’d expect from Karen and Georgia. It’s hysterical, it’s profane, it’s real, it’s full of heart. You’ll laugh out loud on one page, cheer the next, and fight back tears the page after that. Their unique, brash voices shine through just as vibrantly as on the podcast, and they deftly balance the downer moments with great actionable advice and sparkling wit.

Over the years, the ladies of MFM have come to feel like just two more of our girlfriends, gals we could have brunch with and shoot the shit after a rough week. They’ve always been real, familiar people, and getting to hear more of their personal stories is incredibly enjoyable.

Most of all, it’s deeply satisfying to see a pair of people mainstream society would label “misfits” flourish and succeed in such a tangible way, proving the haters and doubters wrong as they write a book, sell out huge theaters, and break records with their “weird, dark obsession”. Rock on, Karen and Georgia. Keep doing you just as hard as you f*cking can. We’ll keep listening—and reading—as long as you do.

Listen to an audiobook excerpt: