When I was in fourth grade the coolest kid I knew was Harriet the Spy, the sixth grade heroine, age 11, of the eponymous children’s book by Louise Fitzhugh, published in 1964. Harriet’s an obnoxious brat with OCD traits who takes notes on everyone and everything around her. She doesn’t just take notes, she adds plenty of commentary which is both hilarious and damning.

Harriet lives in New York City. In addition to keeping tabs on friends, family, classmates, and teachers, after school she has a “spy route.” She makes the rounds of the neighborhood, eavesdropping at lunch counters, creeping down alleys, climbing up onto roofs in order to peer through skylights, even sneaking into private houses.

The objects of Harriet’s surveillance are a fabulous set of characters. If only one of them were to drop dead, we’d be in the middle of a pre-teen Bernie Rhodenbarr mystery. Although Fitzhugh was a friend and sometime collaborator of mystery writer Sandra Scoppettone, she took the story in a different direction: sixth grade realism.

Most of the action takes place within a few square blocks on Manhattan’s Upper East Side. Fitzhugh was living on East 85th Street when she wrote the book, and  Harriet’s world is bounded by East 88th Street, York Avenue, East 82nd Street, and Carl Schurz Park and East End Avenue.

Fitzhugh didn’t waste adjectives on the streetscapes, except for street names and a few bits of real estate broker-ese. Harriet’s friend Janie lives in a garden duplex in a renovated brownstone; her friend Sport lives in an apartment up four flights of stairs. That’s all the description a New York City native needs in order to get the whole picture. It wasn’t nearly enough for me. I spent a lot of time wondering just what exactly Harriet’s neighborhood looked like.

Using Google Maps Street View, we can cruise the streetscapes of today. There’s a nice row of brownstones on the south side of 87th Street between York and East End Avenue. It’s a good match with where Harriet lived, described only as a brownstone located two and a half blocks away from the fictional Gregory School on the corner of East 86th Street and East End Avenue. There isn’t a school on that corner, but the Chapin School is two blocks farther down, on the northwest corner of 84th Street and East End Avenue. Ignore the modern addition on top and focus on the nice red-brick Georgian building at street level and imagine Harriet running up to it, almost late for school.

Mosey on up to Henderson Place, a little private street just off of East 86th and admire the houses and imagine Harriet sneaking into one to eavesdrop on the phone conversations of the very idle and rich Mrs. Agatha K. Plumber. Switch to satellite view and zoom in on the skylights on top of the apartment buildings along East 88th Street and imagine Harriet looking down on Harrison Withers, who lives in a two-room apartment with his 26 cats and makes wire birdcages.

The Google Street View van drives around the neighborhood on sunny days. People wave to it from the stoop of a brownstone. Today’s spies have it way too easy.

Long after fourth grade, Mitzi Morris finally moved to New York City. She has just published Poetic Justice, a mash note to her new hometown tucked inside a traditional mystery. 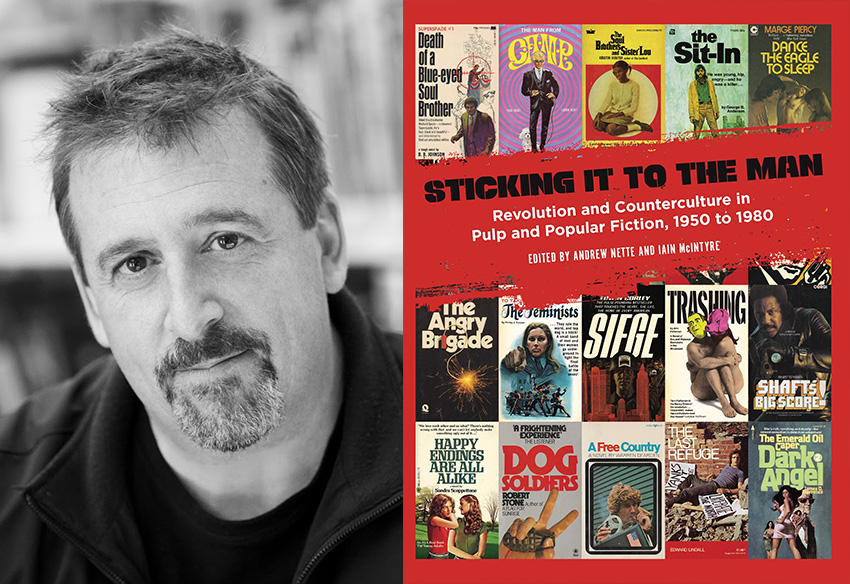 Six Lesser-Known Pulp Writers of the Revolution and Counterculture Era

Sticking It To The Man: Revolution and Counterculture in Pulp and Popular Fiction, 1950 to 1980, edited by myself and Iain McIntyre, is the first comprehensive account of the ways in which the changing politics and culture of the 1950s, ’60s, and ’70s were reflected in pulp, crime and popular fiction in the UK, United…