I suppose it would be difficult to find someone at the Agency who would not find fault with most of the espionage fiction written today—or in the past for that matter. A major concern would revolve around the tradecraft in the books—especially the fascination with assassinations and gunplay—but also more basic things like counter-surveillance and asset handling. Moreover, the vast majority of people who work at the Agency do not correspond to the characters one encounters in most spy fiction, people who seem to carry far too much emotional baggage and nagging self-doubt. And then there are the damn cell phones, with the characters wandering the corridors endlessly chatting away into their phones or discussing highly classified operational matters on their open lines. That always generated laughter and head shaking among colleagues with whom I have worked. I mean, we're not even allowed to bring our cell phones inside the building, and it's recommended that you turn yours off as soon as you enter the compound!

My biggest complaint, however, rests with the disconnect you find in these stories between the intelligence work portrayed and the world of policy and politics that surround it. None of this stuff occurs in a vacuum. All too often, the spies and their agents appear to be working in an ivory tower of sorts, in which spy games are being played out for no apparent reason other than to have one side try to outflank or out-think their opponents for some unexplained operational advantage.

As I've told numerous student groups on recruiting visits, intelligence is about information—particularly secrets other governments are trying to protect—because your policymakers need to be better informed. Theoretically, at least, that should enable them to pursue better policies and reach their objectives more easily.

All the other stuff—escaping surveillance, cultivating an asset, protecting his or her identity, helping them escape when necessary, establishing secure communications methods—is designed to allow our side to get the information our government needs. That material is then provided to the analysts, who place it within the broader field of information available through other sources and the public domain to give the policymakers the assessments and forecasts that should help them do their jobs. Needless to say, this rarely requires shootouts and only occasional skullduggery.

Then again, it is fiction. No one is pretending that their novels and movies offer a documentary presentation, and very few have the experience or background to do that. Frankly, few readers would be captivated by stories of analysts and case officers sitting at their desks or riding from one committee meeting to another on either side of the Potomac. (Occasionally, you do have rush through traffic or run down a corridor to make the meetings on time. But how fascinating is that?)

The challenge that I believe many thriller writers fail to meet is in finding ways to engage the audience while creating a plausible world in which his or her characters must operate. In The Hapsburg Variation—as well as Tears of Innocence, which preceded it—I tried to find that balance between an intense and elevated sense of danger and threat and the need to respond to missives and directives from Washington, as well as the broader context of the world of foreign affairs and national security interests. I hope the readers feel I've succeeded.

Read an excerpt from The Hapsburg Variation & check out Janet Webb's review!

Bill Rapp recently retired from the Central Intelligence Agency after thirty-five years as an analyst, diplomat, and senior manager. After receiving his BA from the University of Notre Dame, an MA from the University of Toronto, and a PhD from Vanderbilt University, Bill taught European History at Iowa State University for a year before heading off to Washington, D.C. The Hapsburg Variation is the second book in the Cold War Spy series featuring Karl Baier. Bill also has a three-book series of detective fiction set outside Chicago with P.I. Bill Habermann, and a thriller set during the fall of the Berlin Wall. He lives in northern Virginia with his wife, two daughters, two miniature schnauzers, and a cat. For more information, go to BillRappsBooks.com. 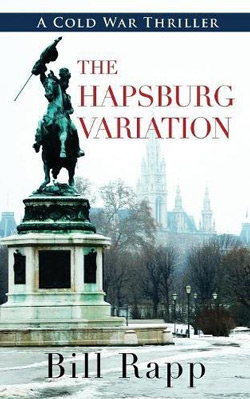 The Hapsburg Variation by Bill Rapp is the second book in the Cold War Thriller series (available December 1, 2017). Those who do not remember history are doomed to repeat it. Readers of The Hapsburg Variation will undoubtedly reference this truism since it’s a guiding principle for protagonist Karl Baier. It seemed to Karl Baier…

The Hapsburg Variation by Bill Rapp is the second book in the Cold War Thriller series (available December 1, 2017). Eight years into his career with the CIA, Karl Baier once again finds himself on the front line of the Cold War. He is stationed in Vienna in the spring of 1955 as Austria and…