February 25, 2022
The Lobotomist's Wife by Samantha Greene Woodruff tells the story of Ruth Emeraldine and her fight to save her husband's patients from what they once believed to be a miracle treatment for mental illness. Join Samantha as she shares a list of doctors from history, some of whom were simply misguided, others who were serial killers, and many in between! 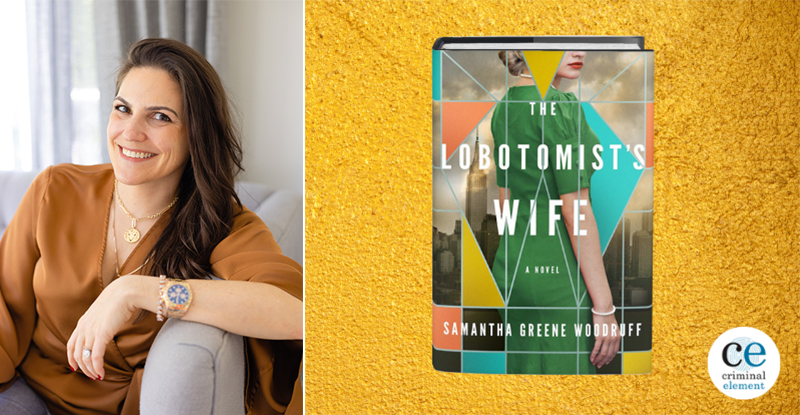 There is something about a criminal doctor that is especially chilling. We are conditioned to trust them to heal us, to blindly put our faith in them in a way we do with, possibly, no one else. We take pills they prescribe without knowing what they are. We even allow them to render us unconscious and cut us open to make us better. This necessary vulnerability creates a dynamic that, when exploited by the doctor, is both particularly unconscionable and terrifying.

One such man was the inspiration for my novel, THE LOBOTOMIST’S WIFE, but there have been many throughout history. I think they loosely divide into a few categories, some more nefarious than others.

Arguably the most terrifying doctors and medical professionals are those drawn to medicine by their bloodlust, whose medical training and/or access to patients enabled them to satisfy their sick obsessions. Here are a few of the most striking:

Jane Toppan was a nurse in in Massachusetts in the 1880s. While her motives were unclear (perhaps altruistic?) Toppan gave elderly and infirm patients lethal doses of morphine and atropine and then crawled into their beds to lie with them as they died. Toppan killed at least 31 victims before she was caught and committed to an asylum for the rest of her life.

George Chapman was a Polish doctor who moved to London in 1888 and was, at one point, suspected of being Jack the Ripper. While in London, Chapman (who had a wife in Poland) had four mistresses all of whom he poisoned and killed with arsenic. Chapman was executed for his crimes in 1903.

Thomas Cream was another serial murderer of women suspected of being Jack the Ripper.  Cream was an abortionist who periodically killed his subjects – primarily lower-class females and prostitutes. He began his murderous career in Canada and then moved to Chicago where, he poisoned and killed multiple people, including the husband of one of his patients (who was also his mistress.) This murder landed him in prison but he managed to have his sentence commuted and in 1891, he moved to London where he murdered at least five prostitutes before he was finally arrested and executed. It is said that his last words before he was hanged were “I am Jack…”.

It is hard to say which is worse, doctors who kill people because they are mentally deranged, or those whose add to that a desire for financial gain. This group of notorious murdering doctors seem to have had money as their primary motivation.

Marcel Petiot was a doctor in Nazi-occupied France who preyed upon those trying to flee. He lured them in by claiming that that he had an escape route out of Nazi territory, and then he would inject them with cyanide, killing them and stealing their possessions. He was captured and eventually tried and executed by guillotine in France in 1946.

John Bodkin Adams was a British doctor accused of killing off hundreds of wealthy patients in the 1940s-50s, many of whom had left him something in their will. He was eventually brought to trial but was never convicted.

World War II was a special time for sick doctors looking to justify immoral experimentation on live human subjects. The men below are some of the most egregious.

Josef Mengele was the head doctor at the Nazis’ Auschwitz concentration camp. He was responsible for deciding which prisoners were gassed and would perform horrifying experiments (including injections to the eye to change its color, limb amputation, and worse) on other prisoners, many of whom he ended up killing for the purposes of his research. After the Holocaust, he escaped to South America, where he lived for the rest of his life. He died by drowning after suffering a stroke while swimming at the age of 67 in 1979.

Dr. Shiro Ishii was the director the department of biological weapons for the Japanese Army during World War II. This performed unthinkable experiments on Chinese POWs and civilians, including giving them deadly diseases, testing horrible biological weapons upon them, performing vivisection on live prisoners, and subjecting them to artificially induced strokes, heart attacks, frostbite, and hypothermia to track how they would die. Ishii avoided war crimes prosecution by turning the results of his experiments over to the U.S. Ultimately, he died of throat cancer at the age of 67 in 1959.

Probably the most controversial of the notorious medical practitioners, these men and women were motivated to do very dark things, at least in part, by a belief that they really were helping their patients for the better.

Linda Burfield Hazzard was an American doctor in the early 1900s century who promoted fasting as a treatment for all ailments. More than 40 of her patients died of starvation at “Starvation Heights” her sanitarium in a small town across the Puget sound from Seattle in Washington state. She was eventually convicted of manslaughter in 1912 and served two years in prison. In 1938 she died of starvation herself.

Miyuki Ishikawa Miyuki was a midwife in Tokyo in the late 1940s who allowed more than 100 babies to die because she believed that their parents were too poor to raise them. She was imprisoned for only four years for her crimes.

Walter Jackson Freeman II, the final entrant on my list, is the inventor of the “ice pick” lobotomy and the inspiration for the doctor in my novel The Lobotomist’s Wife.  Freeman was both a psychologist and a neurologist, specializing in mental illness. While he did not come up with the original idea of operating on a patient’s brain to treat mental illness (that was the Portuguese doctor Egaz Moniz,) Freeman was the first doctor to perform this treatment in the United States.

When it was introduced in 1936, Freeman’s prefrontal lobotomy was one of the only effective, available treatments for violent psychotics, and was seen as a miracle for its ability to turn them docile and child-like. Initially, since he was not a surgeon himself, Freeman performed his lobotomies with the help of a neurosurgeon. They were, after all, drilling into the skull of a living person and then mucking around in their brains.

Over time, as hospitals became overcrowded with WWII vets, Freeman grew anxious to find a way to scale his treatment. By 1946, he had invented a new method to enter the brain — hammering a sharp object through the upper eye socket or “orbital lobe.” His transorbital lobotomy could be done as an outpatient procedure with electroshock as anesthesia, and he could do it without the help of a surgeon.  It is said that Freeman’s did his first transorbital lobotomies with a mallet and an ice pick from his freezer – hence the name “ice pick lobotomy.” Liberated from the operating room (and from a surgical partner to balance him,) Freeman started to travel the country lobotomizing dozens daily and training psychiatrists at state institutions how to perform the procedure, which took as little as 10 minutes.

The heyday of Freeman’s lobotomy was the late 1940s-early 1950s, at which point he went from believing that lobotomy was a “treatment of last resort,” to seeing it as an early intervention for maladies as minor as migraine headaches or unruly children (see Howard Dully’s “My Lobotomy” for a first-person account) and more than half of his patients were women. Even as lobotomy was widely replaced by anti-psychotic drugs, Freeman continued to lobotomize patients until his medical license was revoked in 1967, after he killed a patient. 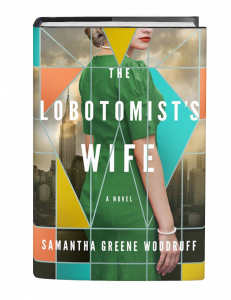 About The Lobotomist’s Wife by Samantha Green Woodruff:

Since her brother took his life after WWI, Ruth Emeraldine has had one goal: to help those suffering from mental illness. Then she falls in love with charismatic Robert Apter―a brilliant doctor championing a radical new treatment, the lobotomy. Ruth believes in it as a miracle treatment and in Robert as its genius pioneer. But as her husband spirals into deluded megalomania, Ruth can’t ignore her growing suspicions. Robert is operating on patients recklessly, often with horrific results. And a vulnerable young mother, Margaret Baxter, is poised to be his next victim.

When Dr. Apter diagnoses her with the baby blues and proposes a lobotomy, she believes the procedure is her only hope. Only Ruth can save her―and scores of others―from the harrowing consequences of Robert’s ambitions.

Inspired by a shocking chapter in medical history, The Lobotomist’s Wife is a galvanizing novel of a woman fighting against the most grievous odds, of ego, and of the best intentions gone horribly awry.

Samantha Greene Woodruff has a BA in history from Wesleyan University and an MBA from the NYU Stern School of Business. She spent most of her career telling stories to executives at MTV Networks as the senior vice president of strategy and business development and, subsequently, audience research for the Nickelodeon Kids & Family Group. After leaving corporate life, she pursued her varied passions, teaching yoga, cooking, and taking classes at the Writing Institute at Sarah Lawrence College. It was here that she combined her multifaceted background with her wild imagination and passion for history, reading, and writing. The Lobotomist's Wife is her first historical fiction novel, and she is already at work on her next book. Sam lives in southern Connecticut with her husband, two children, and two dogs.