Megan Goldin lists her six favorite classic locked room mysteries! Plus, comment for a chance to win a signed copy of her new modern locked-room thriller, The Escape Room!

Written in 1935, this novel by John Dickson Carr, arguably the king of locked-room mysteries as he wrote several, is widely considered the greatest locked-room mystery ever written. A visitor goes into the study of another man. Shots are fired and the first man is discovered by people outside the room to be dying from a gunshot wound. The visitor has disappeared into thin air. The snow on the ground and on the roof by the room’s window is completely undisturbed. There’s not a single footprint. (Note: Three Coffins was also published as The Hollow Man.)

2. And Then There Were None

If John Dickson Carr is the king of locked-room mysteries, then Agatha Christie must certainly be the queen. She wrote several locked-room novels as well. And Then There Were None would probably vie for pole position against Carr’s Three Coffins. Christie’s popular detective Hercule Poirot does not appear in this novel, although he is involved in solving several other of Christie’s locked-room mysteries. In And Then There Were None, a group of people invited to an island get killed one by one until, you guessed it… there were none.

3. The Mystery of the Yellow Room

This French classic written by Gaston Leroux in 1907 is considered a pioneer of the genre. It’s written as a puzzle for the readers to solve. A woman is found in a lock-room injured from an apparent attack but there is nobody else in the room.

Ellery Queen wrote a plethora of locked-room mysteries but The King is Dead should be considered the best. A man threatens to kill his father at midnight. The father locks himself in a room. The son is closely guarded by the novel’s detective protagonist. Yet still, the father dies. The novel, like many others from the era, gives the readers all the clues they need to solve the mystery… if they pay careful attention.

The world’s most famous detective, Sherlock Holmes, and his honorable sidekick, Dr. Watson, had their fair share of locked-room mysteries to solve, and “The Speckled Band” is probably the most famous in Arthur Conan Doyle‘s iconic detective series. In this story, Holmes and Watson are asked to solve the mystery of a woman who died in her locked bedroom on the night before her wedding.

6. “The Adventure of the Sealed Room”

This short story was written by Adrian Conan Doyle (Arthur’s son) and appeared in The Exploits of Sherlock Holmes, a Holmes anthology co-created by Adrian and John Dickson Carr. It was written in the 1950s and the story about a couple who are found locked in a room in what was believed to be a murder-suicide attempt with the husband shooting his wife and then killing himself. But Sherlock Holmes, always the contrarian, has a quite different opinion of what happened once he gets involved. 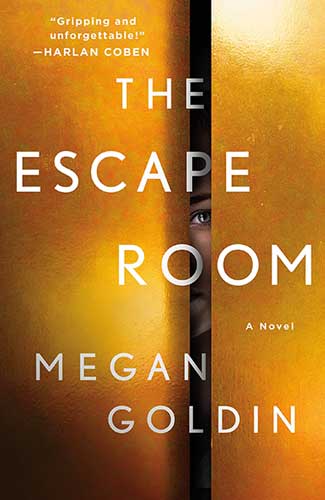 About The Escape Room:

Comment below for a chance to win a copy of The Escape Room by Megan Goldin!

The Escape Room Comment Sweepstakes: NO PURCHASE NECESSARY TO ENTER OR WIN.  A purchase does not improve your chances of winning.  Sweepstakes open to legal residents of 50 United States, D.C., and Canada (excluding Quebec), who are 18 years or older as of the date of entry.  To enter, complete the “Post a Comment” entry at http://www.criminalelement.com/interview-with-jeremy-finley-author-of-the-dark-above/ beginning at 11:00 a.m. Eastern Time (ET) July 23, 2019. Sweepstakes ends at 10:59 a.m. ET August 6, 2019. Void outside the United States and Canada and where prohibited by law. Please see full details and official rules here. Sponsor: Macmillan, 120 Broadway, New York, NY 10271.

Megan Goldin was a journalist before she became a writer. She reported from the Middle East for the Associated Press, Reuters, the (Australian) ABC and other news outlets. She worked in Asia as a reporter and editor for Reuters and Yahoo!. She is the author of The Escape Room, which will be released in the U.S. and UK in 2019, and The Girl In Kellers Way.