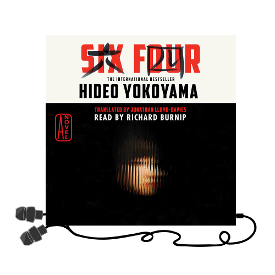 Six Four by Hideo Yokoyama is a dark and riveting plunge into a crime, an investigation, and a culture like no other.

Fourteen years later, the mystery remains unsolved. The police department’s press officer—Yoshinobu Mikami, a former detective who was involved in the original case and who is now himself the father of a missing daughter—is forced to revisit the botched investigation. The stigma of the case known as “Six Four” has never faded; the police’s failure remains a profound source of shame and an unending collective responsibility.

Mikami does not aspire to solve the crime. He has worked in the department for his entire career, and while he has his own ambitions and loyalties, he is hoping simply to reach out to the victim’s family and to help finally put the notorious case to rest. But when he spots an anomaly in the files, he uncovers secrets he never could have imagined. He would never have even looked if he’d known what he would find.

One of the most talked about whodunits of early 2017, Hideo Yokoyama's Six Four immerses the listener in a Japanese police department that has been unable to solve the kidnapping and murder of a young girl for 14 years. Then, a homicide detective turned press officer discovers an anomaly in the case, revealing an unimaginable twist that he never wanted to find.

Listen to an exclusive excerpt of Chapter 2 below:

Hideo Yokoyama was born in 1957. He worked for twelve years as an investigative reporter with a regional newspaper north of Tokyo before becoming one of Japan’s most acclaimed fiction writers. His exhaustive and relentless work ethic is known to mirror the intense and obsessive behavior of his characters, and in January 2003 he was hospitalized following a heart attack brought about by working nonstop for seventy-two hours. Six Four is his sixth novel, and his first to be published in English.