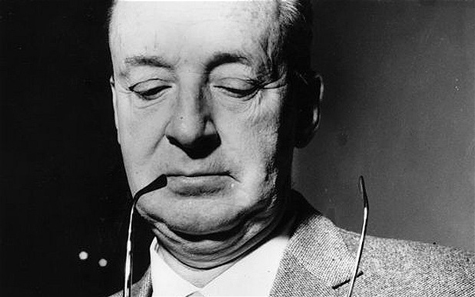 Vladimir Nabokov (1899-1977), world renowned for two twentieth-century literary showpieces—Lolita and Pale Fire—was also a virtuoso at the short story form. From the time he fled Lenin’s communist Russia to long after his financial success was well established in America, he frequently returned to composing short story pieces that were published in notable magazines like The New Yorker, The Hudson Review, and The Atlantic Monthly, to name just a few.

Selected from the sixty-plus tales which have been conveniently assembled in The Stories of Vladimir Nabokov omnibus, there are two particular gems that should hold the attention of every mystery and detective enthusiast: “The Vane Sisters” and “Signs and Symbols.” Though their structure is quite divergent from the respected mystery/detective genres, the elements of a mystery are told in Nabokov’s stylish prose, as he manipulates the reader into the middle of perplexing scenarios, daring them to decipher the riddles.

“The Vane Sisters” begins unassuming enough with a French college professor (of literature, which Nabokov himself taught at Wellesley, Stanford, Cornell, and Harvard universities) enthralled by the formation of icicles hanging off the buildings where he is wandering about one evening. The mesmerizing crystal trail leads him inadvertently to bumping into a former colleague named Professor D. The two had worked together years earlier when they were dating sisters—the Vane sisters. Problem being, D was married while dating Sybil, and this didn’t sit well with Cynthia who our unnamed protagonist was courting.

Cynthia urges her academic beau to apply leverage on his colleague to keep him from breaking Sybil’s heart. Professor D and his wife eventually move away, laying to rest any complications…except, Sybil can’t bear to live without D. In a paper that our protagonist was grading, Sybil had scrawled a message: “Death was not better than D minus, but definitely better than Life minus D.” He rushed to warn Cynthia, but Sybil had already killed herself earlier in the day.

Cynthia becomes a dedicated spiritualist and believes—to our protagonist’s skeptical dismay—she is continually receiving specific messages from departed souls, including Sybil. To appease the spirits, she begins sending Professor D pictures of Sybil’s grave and locks of her own hair that are indistinguishable from her dead sister’s—all to torment him. Eventually, these activities come between Cynthia and the literature professor, which then brings us, the readers, full circle to him finding out from D about Cynthia’s death. One night, in an attempt to reach his former lover from the beyond, the professor tries hard to see meaning behind random sights and sounds in his room only to come, once again, to the conclusion that it’s all poppycock. Still desperate, he muses:

I lay in bed, thinking my dream over and listening to the sparrows outside: Who knows, if recorded and then run backward, those bird sounds might not become human speech, voiced words, just as the latter become a twitter when reversed? I set myself to reread my dream—backward, diagonally, up, down—trying hard to unravel something Cynthia-like in it, something strange and suggestive that must be there.

The New Yorker editor of the time, Katherine White, rejected “The Vane Sisters,” and it would ultimately find a home at The Hudson Review in 1958. Nabokov said of “The Vane Sisters” that the ploy he used “can only be tried once in a thousand years of fiction.”

The aforesaid ploy is not a cheap legerdemain trick, mind you, but a clever narrative construction that reaches the apex for only the most meticulous of readers—while the rest of us will smack ourselves on the side of the head after following up at some online source that offers a take on the conclusion.

From where did his creativity derive? Vladimir Nabokov was quoted as saying, “A writer should have the precision of a poet and the imagination of a scientist.” I would dare say this melding of arts and sciences is present in “The Vane Sisters.”

A decade earlier, in 1948, The New Yorker did publish another Nabokovian thinking-reader’s piece titled “Signs and Symbols” (though, oddly, they reversed it as “Symbols and Signs”). It is an exquisitely composed plot about an elderly couple visiting their deranged son who resides in a sanatorium. His medical condition is labeled “referential mania” and is based on a real condition where the irrational mind believes that all the inanimate objects surrounding him exist solely for him.

Phenomenal nature shadows him wherever he goes. Clouds in the staring sky transmit to one another, by means of slow signs, incredibly detailed information regarding him. His inmost thoughts are discussed at nightfall, in manual alphabet, by darkly gesticulating trees. Pebbles or stains or sun flecks form patterns representing in some awful way messages which he must intercept. Everything is a cipher and of everything he is the theme.

The couple arrives to discover that their son had attempted suicide earlier, and they are persuaded that it is not a good time for a visit. They return to their apartment, and the husband announces that he is going to bring their son back home. As he’s telling his wife his intention, there are two telephone calls that are both wrong numbers with a young woman asking for “Charlie.” The couple then has a late night celebratory meal with the happy thought that their family will be united once again when the phone rings a third time. End of the story. Or is it?

According to Brian Boyd’s essential Vladimir Nabokov: The American Years, in a letter to Katherine White, Nabokov chided the esteemed editor of The New Yorker for not getting “The Vane Sisters.” He explained the mechanics behind both pieces being “wherein a second (main) story is woven into, or placed behind, the superficial semitransparent one.” Of course, Nabokov didn’t reveal to White what that main story happens to be in “Signs and Symbols” leaving her, and now you, the armchair detective, to do the mental footwork.

Trust me that both “The Vane Sisters” and “Signs and Symbols” are well worth the investigation.