J. C. Eaton, author of Botched 4 Murder ponders a question that arises for all series writers: how you handle aging your main characters?

Authors make a number of conscious decisions when crafting their novels – genre, characters, plot, setting, point of view…and the list goes on. But the one question that gets answered as the series develops is that of aging. Characters are introduced at a certain age when the first novel in a series hits the shelves. It’s not until the second, third, or even eighth novel when readers discover the truth about their sleuths.

Nancy Drew was forever sixteen in the original version of the series – in over fifty books! In reality, there wouldn’t be enough days in the week for her to solve all those mysteries, but nevertheless, she (or should we say her authors) persevered. Readers of the Nancy Drew mysteries, which began in 1930, are still eagerly engaged and don’t seem to mind that their amateur sleuth may wind up being older than Methuselah.

And Nancy isn’t the only would-be detective who remains ever fixed in time. Her counterparts, Frank and Joe Hardy, from Franklin W. Dixon’s, The Hardy Boys series, aged so slowly as to defy time, given the number of mysteries they had to solve.

But teen sleuths weren’t the only ones who seemed to have a handle on defying time. Rex Stout’s iconic private detective, Nero Wolf, and Wolf’s assistant, Archie Goodwin, do a pretty good job of remaining in their fifties and thirties, respectfully. We wondered if the common denominator in those three series was the time frame of the 1930s, but when Janet Evanovich introduced her sharp-witted bounty hunter, Stephanie Plum, in 1994, she made the decision to have Stephanie remain in her thirties.

In her formidable book, How I Write, (St. Martin’s Griffin, New York, 2006), Evanovich said, “I’m not interested in creating a realistic portrayal of someone going through all of life’s changes. My goal is to entertain my readers, to make them laugh, to make them think about certain situations and values.”

And she wasn’t the only mystery author who chose to go that route. The late Sue Grafton was quite cagey when it came to revealing the age of her private investigator, Kinsey Millhone.

Other authors, like us, make no bones about it. Our characters are going to age appropriately. Most notably are the teen protagonists whose insights and perspectives grow with time. 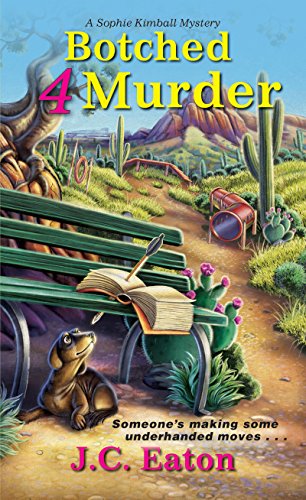 J.K. Rowling’s young wizard, Harry Potter, grew up in seven tomes that took readers from his childhood to young adulthood before letting us meet him briefly as an adult. Vampire lovers Edward and Bella grew up in Stephanie Meyer’s trilogy as well. Same for Katniss from The Hunger Games. And what about Anne from the classic Anne of Green Gables? She grew up, didn’t she?

The same could be said for the amateur sleuths and detectives whose authors have chosen not to keep them frozen in time. Nancy Atherton’s Lori Shepherd is a down-on-her-luck young adult when she first appears in Aunt Dimity’s Death. Now, years later, she’s a mother of three and a capable, resourceful member of her community in the Cotswolds.

When author Elizabeth Peters introduced readers to head-strong protagonist Amelia Peabody in Crocodile on the Sandbank, she provided them with enough historical information to compel Amelia to age in time.

Like Atherton, Peters, and a myriad of other authors, we created characters whose experiences allowed their perspectives to widen and change. Had we not done that, they would always be seeing the world the same way. Age has a peculiar way of changing us. What we thought hilarious when we were in our twenties, we now question a decade later. And the risks we are so willing to take as young adults are tempered with reason and experience as we get older.

By aging our characters, we were able to create more depth in dialogue and a deepening perspective of human nature. Granted, we learned from the masters, so our characters are aging slowly. Slowly, but still aging. At some point, Sophie (Phee) Kimball is going to notice her first gray hair, and Norrie Ellington (The Wine Trail Mysteries) is going to temper her impulsiveness with solid reasoning.

Situations and values change as the characters get older. Not to mention technology. Harriet Plunkett (Sophie Kimball Mysteries) had to give up her rotary phone, and no one in Williams Investigations, from the same series, wanted to drag out a percolator when a Keurig was so convenient. Aging in time allows characters to embrace the changes that happen at such a breakneck speed.

The decision to have one’s characters remain steadfast in time or move along with the current is perhaps one of the most difficult an author has to make when writing a series. The author’s intentions will inevitably determine how the characters are perceived. That being said, when authors create well-developed believable characters, readers will accept those characters no matter how old they are, or will be.

J.C. Eaton is the pen name for the collaborative writing team of Ann I. Goldfarb and James E. Clapp. Together they created a cast of quirky characters who will appear in their “Book Club” mysteries, starting with Booked 4 Murder.