May 11, 2018
Read Erin Kelly's thought-provoking guest post, then make sure you're signed in and comment below for a chance to win a paperback copy of her psychological thriller He Said/She Said! 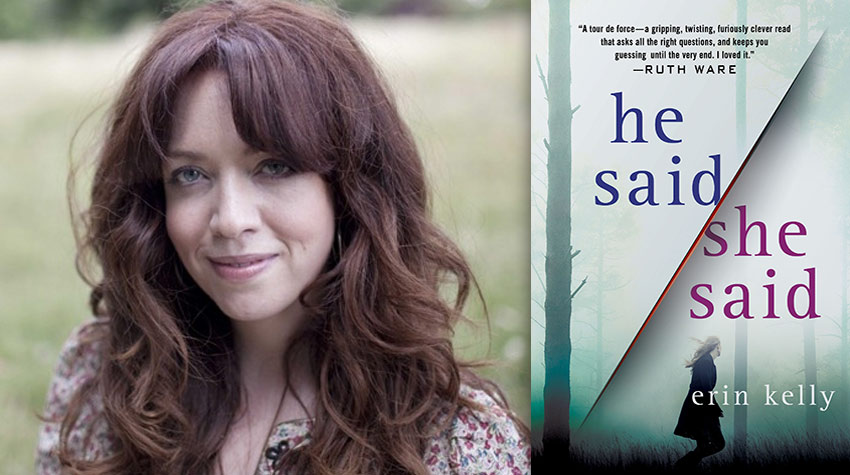 Cornwall, on the rugged west coast of England, 1999. Laura and Kit are at a festival to see a total eclipse of the sun. In the hushed aftermath, they interrupt something terrible. Back in London, Laura can’t forget what she saw. Months later, when she is the star witness in the rape trial, she is so convinced that the accused man is guilty that she tells what she thinks is a little white lie on the stand. After the verdict, she is less sure she did the right thing. Over the years, doubt gives way to fear for Laura’s sanity and for her life.

He Said/She Said is a mystery novel with a difference. Crime fiction is usually a euphemism for murder—whodunit is one of the oldest stories ever—but I’d wanted for a long time to write about a different crime. A crime that, unlike murder, has touched almost everyone you know. A crime with survivors.

It had been a background hum for years—the media stories about rape convictions that focussed not on the victim’s pain but on the rapist himself, the damage done to his career over one “moment of madness.” When that hum turned into a roar, I started to screenshot these stories whenever they turned up on my phone. Within six weeks, I ran out of storage, and something was running out in me too. Patience. I was ready to write.

To do my subject justice, I read and researched for six months until the time eventually came to head into a courtroom. I sat through two sexual-offense trials: one in Cornwall, in the very courtroom where my fictional trial takes place, and another in the Crown Court close to my home in London.

The experience changed me in ways I could not have predicted.

I’ll be honest: I knew the legalities. I really went there for the detail and atmosphere—the stuff that can’t be cribbed from a legal textbook—and there is plenty in an English courtroom. So much of my sense of legal drama had been gleaned from The Good Wife, but we do things on a smaller scale. It’s more formal and less performative than in the US. Our barristers still wear 18th-century wigs and gowns, for a start. Cameras are not permitted in English courtrooms, meaning that TV news coverage of trials is still illustrated by chalk sketches of the defendants.

I uncovered the tiny moments of drama and mystery amid the grinding boredom of evidence and waiting. That middle-aged woman weeping into a Kleenex beside me in the public gallery, for example. Was she the mother of the guy in the dock or the victim who had just given her tearful evidence via video link so she wouldn’t have to face her attacker in court?

But these were incidentals compared to the real lesson of my time in court. I was very aware how prejudice about women skews the way juries see victims. A good jury will be aware that it doesn’t matter what she was wearing, whether she was a virgin, how much she drank, or why she accepted a lift from that guy that night. All that matters is whether she gave her consent. I knew all this. I was a good, woke little liberal. This is what I wanted to explore in my novel.

What I hadn’t counted on was the strength of my preconceptions when it came to the men on trial. Spoiler: both men were found guilty—one of voyeurism and one of indecent assault. In both cases, the evidence was pretty overwhelming. There were digital and forensic trails. On both occasions, I was able to hear them chatting with their families and lawyers in the lobbies before.

I knew all this. I was a good, woke little liberal.

One guy was almost a caricature of a sex offender. He was in his early 20s but dressed like an old man. He stared at his shoes, spoke in mumbles, and I could see his dandruff from the public gallery. Of course, he’s guilty, I thought to myself before he even took the stand, just look at him. In the next heartbeat, I was disgusted with myself; where did that come from? What happened to giving everyone the benefit of the doubt? I’d internalized myths I despise: the idea that men rape because they’re weirdos who can’t get laid rather than to exercise power and harvest others’ dignity. Was I really so stupid as to equate a lack of social skills with guilt? For a split second, yes I was.

The second guy was virtually another species. A college athlete, he’d made the most of his good looks with grooming and tailoring. Well-spoken, well-educated, he clearly came from money. His barrister was a woman in her mid-40s: glossy, polished, terrifying. She shredded the claimant and dismissed solid evidence so convincingly that just for a moment I found myself thinking: no way this lovely young man could have hurt a woman.

In both cases, my gut had decided before my head had a chance. Class, charm, privilege, even cleanliness came into it. I had questioned good evidence because of preconceptions about the man in front of me. I had acted in a way I would have judged in others. Had I acted out of character, or deep in it, from a place so dark I didn’t know it existed?

It was an uncomfortable experience, fraught with shame and self-examination, but ultimately, it made for a better book because I understood why Laura might make the wrong call in court. Laura, whose morality is a big part of her identity. Laura, who wants to do the right thing so badly she makes the worst mistake of her life. I understood her—and so I could bring her to life.

I wrote the book pre-Weinstein, pre-Time’s Up, pre-#MeToo, but it has never seemed so relevant. I hope that He Said/She Said is a contribution to the conversation around consent we are having with each other but, more importantly, the conversations that we have with ourselves.

Comment below for a chance to win a paperback copy of He Said/She Said by Erin Kelly!

He Said/She Said Comment Sweepstakes: NO PURCHASE NECESSARY TO ENTER OR WIN.  A purchase does not improve your chances of winning.  Sweepstakes open to legal residents of 50 United States, D.C., and Canada (excluding Quebec), who are 18 years or older as of the date of entry.  To enter, complete the “Post a Comment” entry at http://www.criminalelement.com/sex-on-trial-comment-sweepstakes beginning at 3:00 p.m. Eastern Time (ET) May 11, 2018. Sweepstakes ends at 2:59 p.m. ET May 22, 2018. Void outside the United States and Canada and where prohibited by law. Please see full details and official rules here. Sponsor: Macmillan, 175 Fifth Ave., New York, NY 10010.

Erin Kelly is the author of several acclaimed novels, including The Poison Tree, among others. She has worked as a freelance journalist for ten years. A regular contributor to the Daily Mail, Psychologies, Red, and Look, she has also written for Elle, Marie Claire, and Glamour.