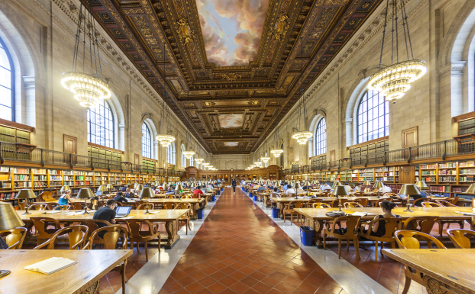 Read Con Lehane's guest post about setting his mystery series in the iconic 42nd Street Library, then make sure you're signed in and comment below for a chance to win a copy of Murder in the Manuscript Room!

Murder in the Manuscript Room—the second book in my 42nd Street Library series—is out today, and I’ve been asked how it came about that I set a mystery series at New York City’s public library’s main branch, the iconic Stephen A. Schwarzman Building at the corner of 42nd Street and Fifth Avenue.

The simple answer is in the mid-2000s, I’d published three mysteries—variously described as hardboiled or noir—featuring the New York City bartender and man-about-the-mean-streets, Brian McNulty. But despite some kind reviews, the sales of the books chronicling McNulty’s adventures were not what my publisher had hoped for.

When the publisher canceled the series, my editor, Marcia Markland at St. Martin’s Press, suggested I think about setting a story at the 42nd Street Library. She thought a book set in New York City with a different cast of characters and setting might work better than a book set in the city’s barrooms. I don’t remember if she suggested using a librarian as the detective. The outline she provided was sparse: “Write a book set at the 42nd Street Library.”

I’m a great admirer of libraries. They are a unique institution in the greed-driven society we live in. Can you imagine in today’s United States someone proposing setting up institutions in every city, town, and village of the nation that would provide access to books, records, movies, computers, the internet, as well as advice on how to use and get the most from all of those things—and all of it for free? Yet, the United States more-or-less invented the concept of free libraries. And folks pretty much across the political spectrum still appreciate them. 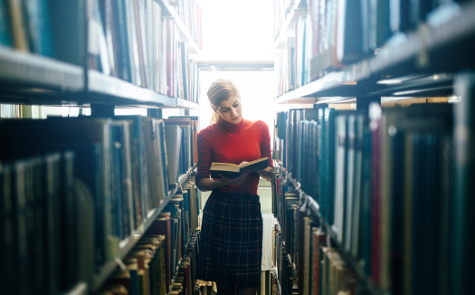 Librarians, the folks who run the libraries, are the curators of our collective knowledge and, as important, our culture. They are also—probably more than any other profession, with the possible exception of writers and other artists—the fiercest protectors of free speech in our society. I liked that my new series would have a protagonist with this pedigree of a seeker of truth and a fighter for freedom of speech.

So I created Raymond Ambler and sent him to work at the New York Public Library’s main branch. I’ve been fascinated by Carrère & Hastings’s Beaux-Arts masterpiece with the lions guarding the front entrance since I was a kid. The building is a major tourist attraction for the city, with millions of visitors passing through each year. Yet, it is also very much a working library, filled with scholars from grade-school kids checking out books from the Children’s Center on the first floor (the only circulating library in the building) to college students researching term papers, grad students writing dissertations, and Pulitzer Prize-winning authors writing books in one of the library’s study rooms. (To learn more about the building and its origins visit https://www.nypl.org/about/locations/schwarzman.)

Once I began writing the book, I felt I needed to get a better sense of the library and the work life of librarians. I’d been a bartender for a number of years—24 stints in all, many of them in New York—so in tackling the world of bars and barflies, I knew, more-or-less, whereof I spoke. But I’d never been a librarian. As much as I love libraries—and while I’ve spent time in a good many of them—I’d spent more time in bars. In order to write about a library, I needed to do more than read about it or look at it; I needed to feel it. So I started hanging out at the library.

I wrote the book and sent it to my editor. For this reason and that, she held onto the book for a while. At some point, she asked for a proposal for a second book in the series. What happened was she rejected the book I sent and gave me a contract for the proposed book, as yet unwritten, which became Murder at the 42nd Street Library.

In that first never-to-see-the-light-of-day book, Ambler was a historian and a curator in the Manuscript and Archives division of the library. For Murder at the 42nd Street Library, I changed his job to the curator of the library’s crime fiction collection. There were two things at work here: I’d made him a curator in the first place because this is the essence of the 42nd Street Library—it’s a research library, not a circulating library, with amazing collections in the Rare Books Division, the Manuscripts and Archives Division, the Berg Collection of British and American literature, and on and on.

You’ll note there’s no mention of a crime fiction collection here. That’s because I made it up, like I made up Ambler.

There’s another reason for making him specifically the curator of the crime fiction collection. Actual librarians know too much about databases and catalogs and indexes and zillions of other information sources for an interloper like me to fake it. Curators are usually subject-area specialists. They know a lot too but about a specific area. This, I figured I could fake if I used the right knowledge area, so I invented “crime fiction” as an area of expertise. I certainly don’t know as much about crime fiction as a real expert like Otto Penzler or Michael Dirda or any number of scholars or reviewers. But it’s a knowledge area I know something about, more than the guy off the street, say. I’ve read widely, and at one point I created a college course on the detective novel as literature.

Once I made Ambler the curator of the crime fiction collection, things began to roll. I went to the library whenever I could. After a while, I worked my way into a kind of sinecure. There are a few study rooms in the library (the Frederick Lewis Allen Room, the Wertheim Study, and the Shoichi Noma Reading Room) that you can apply for if you’re doing extensive library research. I had a book contract, which qualified me for the Frederick Lewis Allen Room, so I spent almost a year going to the library most days as if I worked there. And sort of by osmosis, I got a sense of what it might be like to be the curator of crime fiction.

I learned a lot about working in a library in those months—nearly a year—I spent as a reader in the Frederick Lewis Allen Room. This knowledge I passed on to Raymond Ambler. His work, which includes an abiding interest in murder, is the centerpiece of his life. He’s a thoughtful sleuth. He asks questions. He ponders. He searches out answers, often in what a murder victim might have left behind in a collection at the library.

I’m sure I missed a lot, too, of what working in a library entails. Still, I came away with abiding admiration and respect for folks who do that work, and with a character I think is a believable and honorable librarian/sleuth.

Comment below for a chance to win a copy of Murder in the Manuscript Room by Con Lehane!

Murder in the Manuscript Room Comment Sweepstakes: NO PURCHASE NECESSARY TO ENTER OR WIN.  A purchase does not improve your chances of winning.  Sweepstakes open to legal residents of 50 United States, D.C., and Canada (excluding Quebec), who are 18 years or older as of the date of entry.  To enter, complete the “Post a Comment” entry at https://www.criminalelement.com/blogs/2017/11/setting-a-mystery-series-at-new-york-citys-42nd-street-library-comment-sweepstakes beginning at 1:00 p.m. Eastern Time (ET) November 21, 2017. Sweepstakes ends 12:59 p.m. ET November 28, 2017. Void outside the United States and Canada and where prohibited by law. Please see full details and official rules here. Sponsor: Macmillan, 175 Fifth Ave., New York, NY 10010.

Con Lehane is a mystery writer who lives outside Washington, DC. He is the author of the Bartender Brian McNulty Mysteries, including What Goes Around Comes Around, and The 42nd Street Library Mysteries, including Murder at the 42nd Street Library. Over the years, he has worked as a college professor, a union organizer, a labor journalist, and has tended bar at two dozen or so drinking establishments.