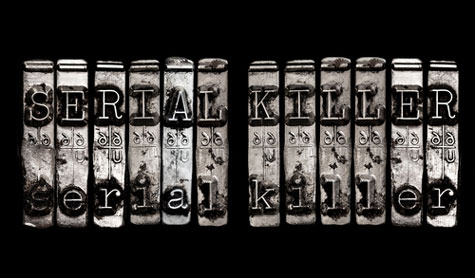 Serial killers, for better or for worse, are some of the more infamous characters in history. As fascination mixes with fear, the gruesome and torturous killings become the stuff of nightmares. We don't want to see, but we can't look away.

Often, the killers revel in the spotlight — it's what drives them. Some even go so far as to taunt the police, the media, and the public with “calling cards” left at the scene to “mark” their kill.

And after reading Spencer Kope's Collecting the Dead, this got us thinking about all these other notorious characters, both real and fictitious, and their calling cards. We've detailed the most gruesome below.

The Zodiac Killer, whose identity remains unknown, terrorized northern California in the late 60s and early 70s. Claiming to have killed 37 people, Zodiac frequently taunted police and media with cryptic messages (often hiding them with ciphers) confessing to past crimes and outlining future ones.

The killer’s calling card was a cross-circle symbol that he signed most of his messages with and sometimes left at the crime scene.

Next to his cross-circle signature, he’d often keep a running tally of victims and a taunting reminder of the failure of the San Francisco Police Department to bring him down.

Jame Gumb, most notably known as “Buffalo Bill” for the way he skinned his victims, is the primary antagonist in the Thomas Harris novel The Silence of the Lambs. His character is an amalgamation of several real-life serial killers, taking qualities and personal backstory from each.

Orphaned until the age of 10, he long felt he was born the wrong sex but, do to his mental instability, was denied reassignment surgery. This led to his obsession with killing women and using their skin to make a woman suit to wear.

After killing and skinning his victims, Buffalo Bill would dump them in different rivers to get rid of the evidence. In one of his final victims before being caught, he stuffed a Death’s-Head moth down the victim’s throat—a calling card that eventually led to his capture. Richard Ramirez was dubbed The Night Stalker due to his reign of terror in California between June 1984 and August ’85 where he would break into homes late at night and brutally rape, torture, and kill its inhabitants.

An avowed Satanist, Ramirez would sometimes draw pentagrams on his victims and the walls of the houses he broke into—even tattooing a pentagram on his hand and famously flashing it during his trial.

Overall, Ramirez was convicted of 13 counts of murder and sentenced to death. He died from complications of B-cell lymphoma while awaiting execution.

The Joker is a comic supervillain and arch-nemesis of Batman in the DC Universe. He is a psychopath with a warped, sadistic sense of humor, often using “prop weapons” such as razor-tipped playing cards, deadly joy buzzers, and acid-spraying lapel flowers — even a gun that upon first firing shoots a “BANG” flag, which upon second firing lauches and skewers the target.

A criminal mastermind with no superpowers to speak of, the Joker’s calling card is quite literal — he leaves behind a Joker playing card. The Beltway Snipers attacks were a series of coordinated shootings over three weeks in Maryland, Virginia, and Washington D.C. in October 2002. John Allen Muhammad and Lee Boyd Malvo were the aforementioned Beltway Snipers.

Originally named the Beltway Snipers due to three week spree concentrated around the DC Beltway, or I-495, it was later connected to a spree starting in February of 2002 in Tacoma, WA that saw the killers traverse most of the country before landing in the DC area.

Left behind at several crime scenes were various tarot cards. At one, the Death card was left with the lines: “For you mr. Police.” “Code: ‘Call me God’.” “Do not release to the press.” The Sad Face Killer has been terrorizing the mid-western United States for years, but only recently has his pattern been discovered.

With a penchant for young brunette women, The Sad Face Killer chooses his victims based off photographs that appear in local newspapers. He then stalks these women for days, waiting for the perfect moment to capture and kill them. Some of the bodies are left on display, though many others remain hidden completely. The killer’s calling card is a classic frowning face, drawn in different spots at each crime scene. Sometimes it’s drawn on a car window. Other times, it’s made with rocks next to the body.

Join Our Newsletter For:

Check out Collecting the Dead by Spencer Kope and watch the hunt for Sad Face unfold.