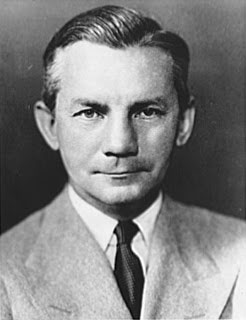 In the conspiracy world, the death of James Forrestal is prima facie evidence of a cover-up of…. well, something. What that something is, is generally up for debate. But was his fall from the 16th floor of Bethesda Medical Center truly the suicide of a trouble man, or the murder of a man who knew too much?

James Forrestal was the last cabinet level Secretary of the Navy, and the first Secretary of Defense. But his primary civilian career had been in business on Wall Street. However, with the coming of the First World War, he joined the navy as an aviator, eventually reaching the rank of lieutenant.  In the war’s aftermath, Forrestal became something of a prodigy at promoting Democratic candidates in New York. His neighbor, Franklin Delano Roosevelt, didn’t forget, and as World War II approached, Forrestal was appointed special administrative assistant to Roosevelt and, shortly thereafter, to the new position of undersecretary of the Navy. Upon the death of Frank Knox in 1944, Forrestal succeeded him as Secretary of the Navy.

Though an exemplary businessman, Forrestal was faced with the challenges of bringing a wartime Navy down to peacetime levels, a not inconsiderable task.  When President Truman reorganized the defense establishment in 1947 and the position of Secretary of Defense emerged, Forrestal was the logical choice to lead the new defense department.

He ruffled some feathers as SecDef, urging the desegregation of our armed forces and opposing the partition of Palestine to allow for the creation of Israel.  He consistently warned of the growing threat posed by the Soviet Union.

The general story says that by 1948, Forrestal was weary from his years at Navy as well as overseeing the defense department. As the presidential election grew closer, Forrestal held some confidential meetings with Governor Thomas Dewey, Truman’s opponent, meetings designed to ensure that Forrestal would continue at the Defense Department if Dewey defeated Truman as was expected.  Columnist Drew Pearson exposed the meetings some time before the election.  The exposure strained already difficult relations between Truman and Forrestal, and in March 1949, Truman abruptly requested Forrestal’s resignation.

Here’s where the stories go haywire. For on the very day of Forrestal’s removal from office, he allegedly went into a deep depressive state. He was flown to Florida where his wife was vacationing.  Dr. William Menninger diagnosed Forrestal as severely depressed, but rather than having Forrestal admitted to his own clinic, one that was familiar with such conditions, Forrestal was flown back to Bethesda and committed to the VIP suite of the National Naval Medical Center, an odd destination considering that Forrestal was no longer a government employee. Even stranger was the fact that access to him was severely limited, something the government denied, but that Forrestal’s brother, Henry, confirmed.

Murder theorists hang their hat on a couple of things. Henry Forrestal was preparing to have his brother discharged and taken to a restful location in the country on May 22nd. But in the early morning hours of that day, Forrestal’s body was found on the outside ground after apparently jumping to his death.  Here is what bothers such theorists most. Forrestal was last seen at 1:45 a.m., awake, copying a passage from Sophocles’ play Ajax. He rejected a sedative, saying he planned to stay up late. Approximately 15 minutes later, Forrestal was dead. He had apparently chosen to jump out of a bathroom window, which was far smaller than the window in his main room. What was even stranger was that he had the belt to his bathrobe tied around his throat, but there was no evidence that it had been tied to anything inside the bathroom, as he would have done if attempting to hang himself. The fact that a man considered suicidal was placed on the 16th floor also raises eyebrows, especially when it’s learned that his caretakers had preferred a ground floor room.

The death was immediately labeled a suicide before any investigation had taken place. The local police were frozen out, and the Navy ran the show. A Chaplain Sheehy, who came to the hospital upon hearing of Forrestal’s death was reportedly approached by a corpsman who claimed that the former SecDef did not kill himself. Whether James Forrestal killed himself or he was the victim of a murder, everything possible was done to keep the official story intact.

So far so good. Enough loose threads to justify doubting the government’s rather hasty conclusion. However, homicides generally have a motive.  And this is where the Forrestal case gets kind of murky. Why would anyone want Forrestal dead? He was no longer Secretary of Defense, having essentially been fired by President Truman. One rather strange thing did happen on the day that Forrestal stepped down, and Louis Johnson was sworn in. Secretary of the Air Force Stuart Symington, no friend of Forrestal’s, told him that he needed to speak to Forrestal confidentially. They rode back to the Pentagon in the same vehicle. Witnesses say that whatever the pair discussed, it had a traumatic impact on Forrestal, who very nearly entered a catatonic state.

Richard Dolan, in his 2001 book UFOs and the National Security State: Chronology of a Cover-Up, 1941 to 1973, suggests that Forrestal was in a position to know the truth about UFOs and that perhaps Symington’s chat was related to that. If Forrestal was as mentally unbalanced as the government would have people believe, so the theory goes, his removal might have been accomplished to keep him from revealing what he knew. It has also been speculated that Forrestal’s vehement anti-Soviet beliefs may have made him the target of the KGB.  Forrestal also kept a diary that might have been embarrassing to the Truman administration.  And it was the Truman administration that immediately seized Forrestal’s diary upon his death.

Before all of the skeptics start shouting, the truth is that four years later, a CIA officer named Frank Olson was tossed out of a New York hotel window. It was claimed that Olson jumped as well, after a reported bad trip on LSD.  But the Olson family refused to accept the official story and forty-one years later, after Olson’s body was exhumed, forensic analysis proved that Olson had been clobbered on the head immediately prior to his fall.

Murder or suicide?  Without more evidence, it’s an impossible question to answer.  Forrestal is now interred at Arlington National Cemetery, but it would be interesting to see what a forensic examination of his remains might reveal.