November 29, 2021
It's never easy when your favorite character dies. Luckily, if you're a writer, that choice is yours. Author Nick Kolakowski visits the site this week to share how he resurrected one of his own favorite characters for his new comedic crime thriller Love & Bullets: Megabomb Edition, available now from Shotgun Honey.

Way back in ye olden days of 2017, I wrote a noir novella titled A Brutal Bunch of Heartbroken Saps. It featured three central characters: Bill, a sarcastic and luxury-loving conman who wasn’t nearly as smart as he thought he was; Fiona, a hard-driving mob assassin (and Bill’s on-again, off-again girlfriend); and a nameless hitman, recently divorced, whose sanity begins to slip as he pursues Bill and Fiona across Oklahoma.

I wrote the chapters featuring Bill and Fiona in the third person; those with the hitman, in the first. It was a risky maneuver, switching perspectives like that, but the hitman’s voice was so compelling, so weird and feral and lively, that I felt the overwhelming urge to channel it. Plus, his rising insanity gave me the chance to deploy some of my sickest jokes.

Then I killed him.

It felt like the right thing to do. By the end of the novella, the character had completed his emotional arc and achieved something like redemption (or at least as much redemption as a weirdo mass murderer can hope to achieve). Shooting him down felt like the best idea, even if part of me hated to do it.

The following novellas in the series, Slaughterhouse Blues and Main Bad Guy, touched a bit on the hitman’s end, but their narratives skewed to focus almost entirely on Bill, Fiona, and (eventually) their extended families. The story swung from the Dominican Republic and Nicaragua to Cuba and, eventually, New York City. I liked how I wrapped things up; once the novellas were out in the world, I moved onto writing other books.

Then the unexpected happened. A German publisher wanted to publish all three novellas as a combined volume, which they did in 2020—and the translated edition did well in Germany and surrounding countries. After that, Shotgun Honey, which originally published the novellas, wanted to do a combined edition in English.

And that gave me an opportunity to do something big. Perhaps not the wisest impulse, but the act of writing is often irrational.

I was going to bring my favorite hitman back from the dead.

The reason for this was partially practical: If I didn’t extend the initial novella’s mix of third- and first-person perspectives throughout the whole novel, things would feel unbalanced and weird. (The German edition spelled out clearly that it was three translated novellas; with the English edition, I was going for something a bit more cohesive, with the lines between the novellas effectively blurred out.) But there was an emotional component, as well: I really liked the character, and I wanted him to return.

Sometimes, a character’s unexpected resurrection is an easy task for an author; presumably, George R.R. Martin planned to kill off Jon Snow long before he actually committed the deed on the page, and wove the seeds of the character’s comeback into the narrative well in advance. Other instances have proven quite difficult, if only because the author didn’t plan ahead: Arthur Conan Doyle, for example, killed off Sherlock Holmes in a rather definitive way—and when he bowed to public outrage and brought the character back (“The Adventure of the Empty House”), he needed to do so via a convoluted, borderline-unbelievable series of events.

In my case, being able to re-write an existing work meant I could simply tweak the first third of the narrative in a way that allowed the character to (barely) survive the gunshot that killed him the first time around. From there, I subjected him to a whole new chain of terrible and hilarious events, including accidentally stealing a serial killer’s car.

After that, I incorporated the character into the rest of the book, which was a pretty heavy lift, especially since he needed an altered narrative arc. But it was worth it. It feels good to give some of your characters another chance to get things right. 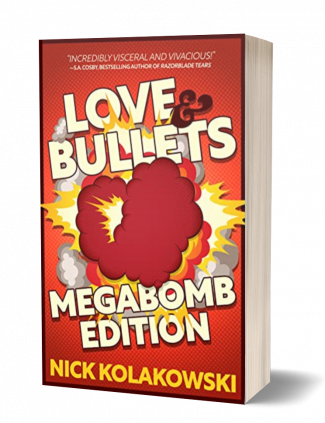 Bill is a conman with a taste for high-end cars, beautiful suits, and top-shelf liquor. But he’s getting tired of the cons he needs to maintain that lifestyle—and he’s sick of the violence that’s sometimes part of the job.

Bill’s girlfriend Fiona doesn’t have a problem with violence, though. She’ll crush anyone who stands in her way—and some days, it seems like the whole world wants a piece of her. She loves Bill, but she’s tired of cleaning up after him.

When Bill decides to “borrow” a couple million from one of New York City’s most vicious gangs and flee for the tropics, it puts their relationship to the test—and while they’re working out their issues, they’ll also need to fend off crooked cops, dimwitted bouncers, and an irate assassin in the midst of the world’s weirdest midlife crisis.