It’s the voice that grips you first. A deep, gravelly drawl that if you are on the wrong side of him instills profound fear, leaving you trembling, knowing, perhaps, you’re within seconds of meeting your maker. The steely eyes, distinctive horseshoe mustache, and lean muscular physique completes the image of what we want to believe the real cowboy resembled in the Old West. Possibly more than any other actor of the last half of the 20th century—and up until present day—Elliott flawlessly embodies the look and sound of the knight errant on horseback and also delivers the unflinching attitude of a hero who won’t back down. Whereas Clint Eastwood made sporadic Western films in the 1970s and 80s, stopping altogether with 1992’s Unforgiven, Sam Elliott kept the Western movie wagon rolling, making a series of commercially and critically lauded films. Here are just a few. This hugely popular, epic television film was based on Louis L’Amour’s The Daybreakers and Sackett.

It’s Orrin Sackett’s (Tom Selleck) wedding day but a hard case from the Higgins clan comes gunning for him over the death of his brother, a man who Orrin had killed. Orrin’s bride is shot instead before Tyrel Sackett (Jeff Osterhage) comes to their defense, killing the assassin. Both Orrin and Tyrel leave Tennessee, heading West. Meanwhile their older brother, Tell Sackett (Sam Elliott), is in Uvalde, Texas, where he shoots Wes Bigelow, a card shark who was cheating him and his fellow miners. The head of the camp warns him that Bigelow’s brothers are due in that night, suggesting Tell to leave, which he promptly does. Their trails eventually meet and the close-knit family bonds are strengthened once more as they go up against ten-to-one odds at pretty much every turn. A rewarding bounty of top Western stars including Glenn Ford, Ben Johnson, L.Q. Jones, Buck Taylor, and Mercedes McCambridge as Ma Sackett. The film is also briefly introduced by L’Amour himself.

Elliott’s distinctive twang and laid back style was established with The Sacketts. 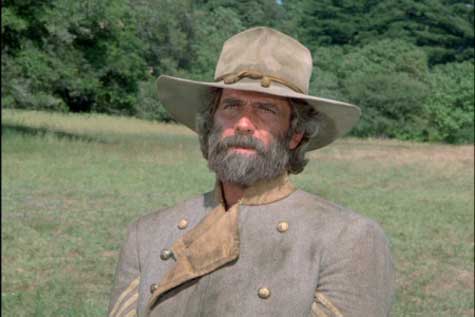 A number of the main actors from The Sacketts reunited for this fun romp based on another L’Amour story. Elliott and Selleck play the Traven brothers who fought on opposite sides of the Civil War. They return to find two sisters and their little brother (once again, Jeff Osterhage) are held hostage by an unscrupulous former soldier and search out to bring them back. Elliott’s real-life wife Katherine Ross (they met on the set of Butch Cassidy and the Sundance Kid where he had a bit part as Card Player #2) plays his feisty wife, Kate, who is also among the missing. So many memorable scenes from Ross kicking water in Elliott’s face while Selleck and Osterhage look on amused, Ben Johnson tossing dynamite into a crowded bar before skedaddling, to a climatic showdown with the outlaws on a moving train. A breezy, entertaining Western with Elliott playing a variation of his role as Tell Sackett that’s well worth the time.

Trivia: According to IMDb, the three leads enjoyed working together on The Sackets so much that they approached L’Amour and asked him to pen a new adventure and The Shadow Riders was born. Elliott is Con Vallian (talk about a unique name!) who’s been tracking Running Wolf (Larry Sellers) for 300 miles to a small, wind-swept town called Bender’s Flats in Wyoming Territory, circa 1876. The town is controlled by Doc Shabbit (Matt Clark), the head thug for a bunch of owlhoots that set their eyes on a passing family named the McKaskels from Pennsylvania carrying a load of supplies and several horses the gang wants to steal. Vallian helps Tom McKaskel (Kenny Morrison) retrieve two horses that had been swiped, but in the process he kills Shabbit’s only son which sends the gang leader on a revenge path. Running Wolf, now traveling with Shabbit, is the only member of the gang acutely aware of what they are up against as Con Vallian makes it his mission to help the McKaskel’s to safety. Standout performance by Kate Capshaw who plays Susanna McKaskel, the object of attention for not only Vallian but one of the rogue’s in pursuit.

The best line comes from Elliott as he confronts a killer who’s begging him to spare his life: “Wonder why it is the men who plead for mercy never give it?” Bam! Real life Bill Tilghman was one of the great heroes of the Old West having established himself along with Heck Thomas and Chris Madsen—the trio became known as the Three Guardsmen—for cleaning up crime including the Wild Bunch. Wyatt Earp (one-time partner of Tilghman) and Bat Masterson may have become more famous but Tilghman served as a lawman longer (1869-1924) and arguably was the most respected of them all. Elliott portrays Tilgman with honorable conviction as a seventy-year old lawman who should have stayed retired but due to selfless conviction returns to law enforcing this time in the unruly, corrupt town of Cromwell. Unfortunately it was Tilghman’s last ride, and Elliott’s final scene—a tear jerker that got me—is testament to his impressive acting.

I’m barely breaking the surface here. Sam Ellliott has also starred in Gettysburg, Conagher, Tombstone, The Desperate Trail, Butch Cassidy and The Sundance Kid, The Hi-Lo Country, Buffalo Girls, Rough Riders, Gone to Texas, and The Yellow Rose TV series. And although not a Western, there is one more that must be mentioned because it played off his well-identified image—his role as The Stranger opposite Jeff Bridges in The Big Lewboski.