Royalty’s Addiction to Horses and an Introduction to Dick Francis 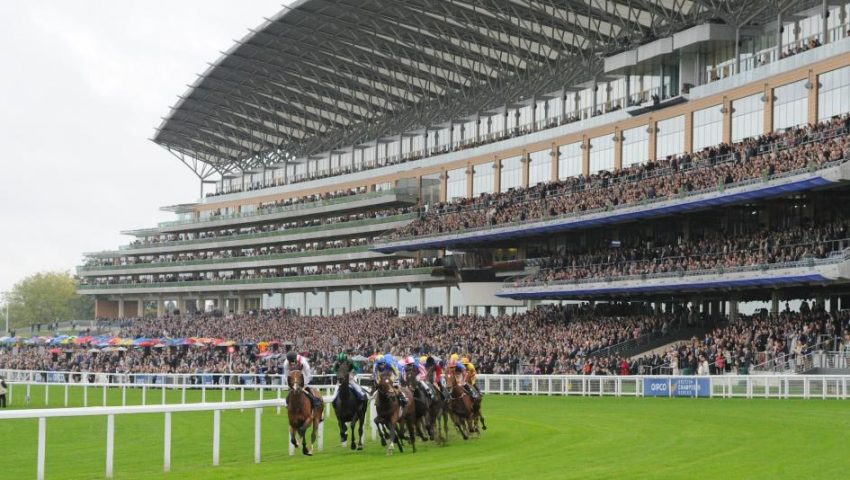 All eyes are on Windsor Castle with the wedding of Prince Harry and American actress Meghan Markle just days away. In the run-up to the festivities, the Queen and her court attended The Royal Windsor Horse Show, held on the private grounds of Windsor Castle. A headline from an Australian tabloid sums it up nicely: “The Queen enjoys her favourite event of the year ahead of Meghan and Harry’s big day.” According to the British newspaper The Sun, “The Queen has not missed the event since it was first held in 1943 in a bid to help raise money for the war effort.”

Another favored haunt of the Royals is Royal Ascot: “Ascot Racecourse was founded in 1711 by Queen Anne. The first race, ‘Her Majesty’s Plate’, with a purse of 100 guineas, was held on 11 August 1711.” The current Queen is not just a spectator when she goes to the races, she’s a leading owner and breeder of racehorses.

Ascot Racecourse (“ascot” pronounced /ˈæskət/, often incorrectly pronounced /ˈæskɒt/) is a British racecourse, located in Ascot, Berkshire, England, which is used for thoroughbred horse racing. It is one of the leading racecourses in the United Kingdom, hosting 13 of Britain’s 36 annual Group 1 horse races.

“Thoroughbred racing became, and remains, popular with the aristocrats and royalty of British society, earning it the title ‘Sport of Kings’ ” (Wikipedia). The original sport of kings was hunting on horseback, and thoroughbred racing evolved from that. Champion steeplechase jockey Dick Francis originally “started as an amateur, going professional in 1948.” His first book was an autobiography, published in 1957, entitled The Sport of Queens—a most appropriate turn of phrase for Elizabeth, the Queen Mother. It was said that Francis was the Queen Mother’s favored author. Certainly, she can take credit for instigating his second career because she fired him in 1957. Perhaps firing is not quite accurate—her friend and racing adviser, the Marquess of Abergavenny, told Francis that the Queen Mother wanted him to retire from racing because of his continuing serious injuries. Francis followed her advice, but he took it very hard. He tried journalism, but the money wasn’t what it was when he was winning races, so he turned to writing.

How Francis parleyed a sensational racing career into a second career as a worldwide bestseller of racing thrillers is a fascinating tale. His obituary in The Guardian is a good starting spot. His books serve up a double dose of racing and mystery. Francis was only too aware of nefarious deeds that took place in the world of racing. Betting and horse races go together like chalk and cheese. With so much money on the line, there are always folks who like to ensure that the odds are in their favor. The racing world was fertile soil for Francis’s thrillers.

All his novels deal with crime in the horse-racing world, some of the criminals being outwardly respectable figures.

His heroes are quiet, honorable men, often surprising themselves with the mental and physical courage they discover within when confronted with evil. Their ability to bounce back from grievous injury is surely a nod to a professional jockey’s ability to ride through the pain. Francis’s storied racing career may have been the impetus that led readers to give his first thriller, Dead Cert, a try, but he was a compelling writer as well. He served up British racing to the world—initially his books were set around race tracks, but eventually, the racing connection—while always integral—expanded to include other fields (computer crime, art theft, and tampering with the transport of champion racehorses, for instance). Francis was not always popular with the owners of British racing, shining a spotlight as he did on their misdeeds. Crime still impinges on racing. Check out a Reuters story from 2016 entitled: “British Horseracing Authority tightens anti-corruption measures.”

Though, crime at the racetrack is not exclusively a British problem—far from it. Sasscer Hill’s sophomore thriller, The Dark Side of Town, tackles the “seamy underbelly of horse racing” at New York’s Saratoga Race Course (open in 1863, making it one of America’s oldest sporting venues).

Did Dick Francis ever write about the British Royals? Sadly, no. The closest we get to royalty is the fictional Princess Casilia. This is Dalhousie Professor Rohan Maitzen’s take on the princess, who appears in Break In (1985) and Bolt (1986).

Both feature jockey Kit Fielding, one of only two repeaters in Francis’s cast of characters. Kit is a good character, worth revisiting, and over the two books we get an interesting narrative arc involving his relationship with Danielle, niece of Kit’s patron, the excellent Princess Casilia. Racing is central to these books, as it is to Nerve, and Francis writes with great energy and great sympathy about horses and their riders.

For anyone wondering where to start with Dick Francis (he had 40 bestsellers!), Maitzen’s guide to the top 10 Dick Francis books is invaluable. His terse, understated prose is compelling. The Washington Post summed up his appeal: “If you read the first paragraph of Straight, I’m willing to wager, whatever the odds, you will sprint to the finish line.” See for yourself.

Royal Ascot begins on June 19th this year. We know where the Queen will be! After Francis’s death in 2010, his son and frequent collaborator, Felix Francis, continued the Dick Francis brand of race-based thrillers. Perhaps one day, Felix Francis will write her Majesty into a scene as she surely is an integral part of British racing.