Rock’n’Roll All Night And Fight Ninjas Every Day: Miami Connection (1987)

Dave Richards reviews 1987’s comically action-packed Miami Connection, in which a rock band whose members are proficient in Taekwondo stand up against a band of motorcycle ninjas who have tightened their grip on Florida’s narcotics trade.

Feudal Japan’s ninja may have a reputation for being invisible warriors, but in the 1980s they stepped out of the shadows and into the spotlight of American pop culture. Sometimes they were portrayed as heroes in the stories they appeared in, but more often than not they were villains who plagued our action heroes in cinema, comic books, and animated television. In 1987, though, a group of drug trafficking, motorcycle riding ninjas ran afoul of a particularly dangerous foe . . . a band of community college students who knows karate and play rock’n’roll? Yep, that happened! It’s the premise of 1987’s Miami Connection, an unintentional comedic masterpiece from directors Richard Park and Y.K.Kim, and it’s a treasure for those who appreciate awesomely bad cinema.

What makes Miami Connection great is how it uniquely blends earnest and ridiculous. Y.K. Kim, who stars in the film, wrote the story, produced, co-directed, and financed much of the film, did not set out to make a bad movie. He wanted to promote the martial art of Taekwondo, in which he was an expert. He was fairly clueless though when it came to acting, storytelling, and the other fine points of movie making. So the film’s heart is in the right place, which is part of the reason why I think it’s easy to find its many flaws so funny instead of painful.

The film opens by establishing the formidable and brutal menace of a gang of ninjas who violently seize a drug shipment from a laughably stereotyped drug cartel full of gunmen with white fedoras. Sure those ninjas are shown driving to the scene of the theft on incredibly noisy vehicles, but that just proves they’re great at what they do because no one seems to notice their attack. And you should appreciate those ninjas while they’re around. Because they’re not the main villains of the picture. 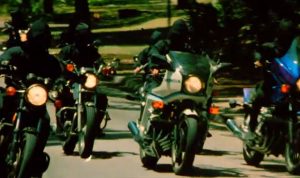 No, that honor belongs to Jeff (William Ergle), a hirsute gang leader who has a creepy fixation on his sister and is in charge of a gang of street toughs that look like they stepped out of a monster truck rally. That gang distributes the drugs for the ninjas, and Jeff doesn’t appreciate his sister dating John, a student she met at the community college she attends. So one day Jeff and his gang roll up on John and lay down the law by socking him in the face.  Unfortunately for them, John has friends and they know Taekwondo! 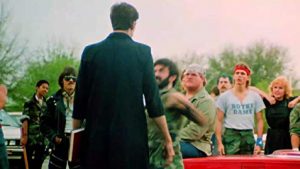 John’s friends are his bandmates in Dragon Sound, a pop-rock band with dreams of making it big. The movie has several of their songs and many shots of them playing. Their songs are silly, but they’re catchy as hell. If you’re like me the song “Against the Ninja” (Yes, they actually sing about fighting ninjas) will worm its way into your ears and stay there for days. The Dragon Sound performance scenes are hilarious because of their depictions of ’80s nightclub life, and because of the fact that Y.K.Kim, who plays Dragon Sound member Mark, clearly does not know how to play guitar. He doesn’t let that stop him from having fun with it though.

Dragon Sound’s musical endeavors also put them in the crosshairs of the band who used to have the regular club gig they landed. And that band also happens to have an army of redneck-looking street toughs to help them get some payback. Because why not? Hey, weren’t there supposed to be ninjas in this movie?

The film’s other laughable, but heartfelt subplot involves Dragon Sound member, Jim, searching for his missing father. Spoiler: He does eventually find him, but the actor playing Jim’s dad is actually younger than Jim. Some terrible makeup applied to the younger actor to make him look older makes the scenes with Jim and his dad even more ridiculous.

Acting and writing may not be in the wheelhouse of the cast and crew of Miami Connection, but Y.K. Kim does know how to stage exciting fight scenes. While his fight scenes don’t entirely make up for his inability to play guitar or recite dialogue, they are entertaining. And eventually, the ninjas do return for the film’s bizarrely brutal climax when they hunt Dragon Sound through a park.

So Miami Connection has it all; fight scenes, ridiculous and infectious music, terrible acting, and plenty of non-sensical writing and film making. If you haven’t seen it yet it’s the perfect “bad movie night.” So gather some friends and prepare to laugh and be astonished by the over the top, ridiculous and glorious mess of a film that is Miami Connection.