According to Variety, Robert Downey Jr. is teaming with Warner Brothers to star in a Perry Mason project to be set back in 1930’s L.A., a temptation for any director or cinematographer, I’d think.  Secretary Della Street will be there, too, and that’s also a tempting role needing plenty of pluck and red lipstick.  Will it work?  Well, RDJ did re-boot Sherlock Holmes as a bloody-knuckled action star to enough acclaim that the sequel Game of Shadows will be out next month. So, perhaps he’ll re-cast Erle Stanley Gardner’s famous defense attorney as a fast-talking charmer? He’ll have to do something different with Mason, because it’s impossible to imagine him delivering the stolid and sonorous pronouncements of Raymond Burr, who played the role so buttoned-up, that he even did field investigations in a suit and tie.

Then again, looking at some of the vintage covers from Gardner’s 82 (!) novels, maybe Robert Downey Jr. is just the guy. 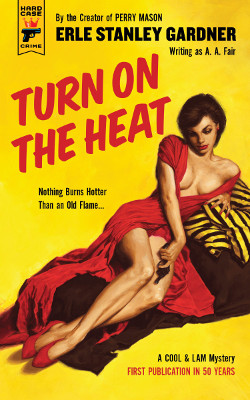 Review: Turn on the Heat by Erle Stanley Gardner The Knife Slipped by Erle Stanley Gardner was meant to be the 2nd book in the Cool & Lam Mystery series but was shelved and subsequently lost for 75 years until Hard Case Crime got their hands on it (Available December 6, 2016). Outside the mystery and detective community, the name Erle Stanley Gardner (1889-1966)… Lily Gardner, author of Betting Blind—the 2nd Lennox Cooper Mystery—was kind enough to answer some of Criminal Element's questions about her beginnings as a writer, her inspirations, and living in Portland, OR.