Mary Willis Walker has seemingly disappeared from the face of the Earth, but not before she left behind The Red Scream—1995's Best Novel according to the Mystery Writers of America. 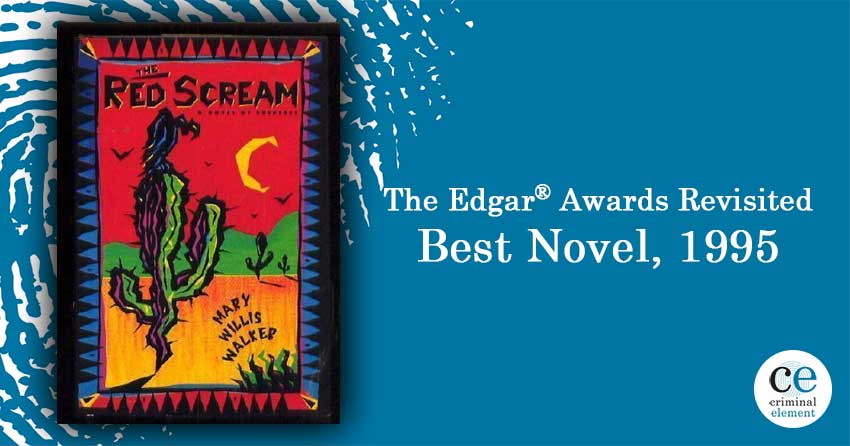 What’s the worst thing that could possibly happen to a reporter? Professionally at least, that’s easy to answer. The worst thing is to make a mistake. And that is what Mary Willis Walker has captured so beautifully in The Red Scream: the anguish of a reporter—possibly—having made a devastating and career-ending error.

At first, this 1995 mystery seems like a perfectly good copycat of Sue Grafton, with its determined but vulnerable, tough but needy, and sassy but damaged heroine. (Grafton was on L is for Lawless when The Red Scream was published.) Main character Molly Cates is a reporter for the Lone Star Monthly, a job that allows the author to avoid those pesky daily deadlines that can make it so difficult to create a reporter character. But there’s a heart to The Red Scream, a special perspective, that makes it important enough to beat icons like Lawrence Block and Edna Buchanan and Peter Robinson and Peter Abrahams.

Journalist Molly Cates is indeed tough, smart, and savvy—but here in 1995, still a woman in a man’s world, with a pushy male editor and a pushy male cop and a pushy male suspect and a pushy male ex-husband and a pushy male convict. Molly’s also written a true crime book—a bit of which we get to read—called Sweating Blood. It’s the story of the creepy, hideous, and unrepentant serial killer Louis Bronk, the baddest of the bad guys. Bronk is now on death row and two weeks from execution. Not only is Bronk physically disgusting, but he’s also terrifyingly morally bankrupt. He kills randomly-chosen vulnerable women, and then tortures them, and to make it even more gruesome, writes chilling doggerel poetry about it.

All set to go.

But for Molly’s book to succeed, she needed him. And, as she was writing it, perhaps Molly has made him think she’ll get his poetry published if he’d divulge his secrets to her. Has she made a deal with the devil? What would it matter? And what if the devil feels she reneged?

We all end up dead

A red scream is the term inmates in Huntsville Prison use to describe the desperate cry a condemned criminal makes as they walk toward their execution. Walker is not shy about allowing crusading reporter Cates to have a contrarian (in that time and place) opinion on the death penalty, but she accompanies it with a moment of regret for her sensitivity when she talks to the District Attorney. Again, Walker highlights the pressure on a woman person in a male-dominated world.

“Remember when he was out killing them killing on the highway, Molly? It seemed like he had all the power then.”

“I know. But I can’t help flinching at the idea of a mighty state taking blood revenge on a man who hasn’t known a day of kindness in his life. We’ll watch them strap him to the gurney and put a needle in his arm. Then will watch him sputter a few times and die, and we’ll walk away feeling like crimefighters, like we’ve done our duty.”

Stan Heffernan looked her in the eye. “Goddamn right we will. My job is to use all my energy and skill to keep people like Louie Bronk  from preying on citizens.” His eyes were burning. “And when we put him to death, I will damn well feel I’ve done my duty. If your sensibilities have gotten too delicate for this, Molly, make a job change. Write about the environment or ladies fashions.

Molly felt her cheeks heat up with the rebuke; maybe he was right.

As the book opens, with the execution looming and Molly‘s book publication imminent, Molly‘s life changes. She gets a Bronk-like poem, and from its creepy rhyme, she assumes it’s from the killer himself. But what makes it even more disturbing is that it seems to threaten her. Personally. But he’s on death row—so how can he hurt her? Then Molly receives another poem. And another. Soon her familiarity with Bronk’s writing talent—or lack of it—creates another dilemma. Has someone else written these verses?

And it turns out there are not only copycat rhymes, there are apparently copycat crimes. And that’s when the plot summary outline in a review like this has to end…

As a reporter, it is riveting (and disturbing) for me to read the jaw-dropping, stomach-churning possibility that the journalistic worst has happened—not only the grossly creepy copycat murder, but the possibility that Molly‘s entire book is wrong. A mistake.

And here’s the clincher: only Molly herself has the opportunity to tell the truth about this crime, the crime that may make her a star.

But if the whole book is based on her own misunderstanding of the crime—and that law enforcement got it wrong—how good a reporter is she?

If Molly does her reporter best and follows clues that lead to Bronk’s innocence, doesn’t that make her guilty? But if she tracks them down and he’s actually the guilty one—then that makes her book even better.  She could win big. Or lose big. Will she throw the ethical dice?

That’s what makes the story so special—Walker’s focus on the choice that devoted reporter Molly must make to be true to her stand up for the little guy philosophy, even while knowing she may discover clues that could lead to her own personal humiliation and defeat.

Woven into what seems like a standard story of a reporter on the trail of a—possibly—unfairly convicted person, this deeply textured and philosophical examination of the conflicts that a reporter feels, a human feels, when everything they have worked for, everything they rely on for their very self-worth, is threatened and shaken. And making it worse, more deeply felt, is the looming demon on her shoulder saying: ‘this is a bad guy anyway’ and ‘what does it matter if he killed one more person or not?’

As the emotions twist and truths about the characters in this Texas town emerge, Molly is faced with not only solving a current crime but a past crime—all the while haunted by her moral dilemma: What does it matter if a reporter hides the truth—if no one will ever know? What happens if a reporter tells the truth—and it proves she’s the one who lied?

And even then, even with those questions, a savvy reader thinks they can predict the answers to—that reader will be wrong. Touchingly so. And that’s what made this book a winner. And keeps it in the winner’s circle.

As for Mary Willis Walker herself—where did she go? She left not only four acclaimed books, but a real-life mystery in her wake. She’s vanished—from the public eye at least. So I am thrilled to be able to tell her, one more time: Mary, if you are out there, your book is still terrific.

We’ll see everyone back here next week as Larry Clow reviews Come to Grief by Dick Francis, the 1996 Edgar Award winner of Best Novel. See you then!

Hank Phillippi Ryan is the bestselling author of ten award-winning novels of suspense. National reviews have called her a "master at crafting suspenseful mysteries" and "a superb and gifted storyteller."