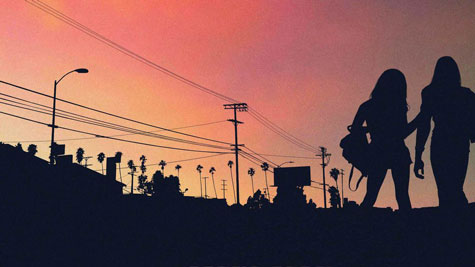 With the digital libraries of online streaming services expanding more and more, choosing which movie to watch has become difficult. We will be digging through these online queues in hope of bringing you a movie worth watching. This time, we're taking a look at gritty street fare in the face of transgendered prostitution.

Remember when late night cable was a wild frontier of cult film? Now, you can watch most of those old movies on Netflix, if you have a DVD subscription. But, what about the new ones? A lot of indie films are streaming on Netflix right now that bring back memories of the ‘80s video store gems like Beastmaster and Vice Squad. You fantasy buffs, check out the Maori warrior legend The Dead Lands…but us gritty street fans, we’ve got a winner in Tangerine.

It was recommended to me by noir queen Christa Faust, a veteran of pre-Disney Times Square herself, so I knew I was in for a treat. I’ve been to L.A. a few times but I wouldn’t say I know it. I went to the Deuce plenty in the ‘80s, and the street vibe is the same. This is working girl territory.

It’s Christmas Eve in old L.A., and prostitute Sin-Dee Rella (played by Kitana Kiki Rodriguez) is fresh out of county jail, looking for her pimp/boyfriend Chester, who she did the time for. Just off the bus, she meets her friend Alexandra (Mya Taylor) at a donut shop. Both working girls are black and transgender, but not stereotypes. Just listening to their patter draws you into the story—like the old Black Mask tales did with the criminal lingo. And, the story kicks off just as fast: Alexandra tells Sin-Dee her man is seeing another woman. Hell hath no fury. Sin is off, just like that, with purpose, leaving Alexandra in the dust. Poor Zondra has a show at a club that night, but it’s not her ticket out of the life, just what she does to be herself.

What keeps the film together, with a somewhat threadbare plot, is the characters. They are alive, real, and not mockeries or caricatures—though they all easily could be.

The other plot woven in stars an Armenian cab driver named Razmik, who works in the area. We meet him when he drops off two drunk fares who get sick in his car and he needs some relief. One of the funniest scenes is when he picks up a working girl and looks shocked when she pulls down her panties and he doesn’t find what he was looking for. No, he loves Sin-Dee, who is transitioning. When he can’t find her, he picks up Zondra instead. And, part of his payment for the trick is to go to her show that night.

Except his wife keeps calling, wondering why he’s working late on Christmas Eve. Eventually, his exasperated mother-in-law goes looking for him.

Meanwhile, Sin-Dee is looking for the mysterious “white bitch” Dinah, kicking her way into a motel-room brothel, revealing rooms full of grotesque old johns serviced by young prostitutes who’ve fled rural dead zones for the big city. She grabs Dinah by the hair and drags her onto the bus to look for Chester.

They all converge on the donut shop of the opening scene for an ending that just keeps getting better. What kind of man is Chester to inspire such rage? Will Sin-Dee take a razor to his jewels or get a backhand? This is more of a comedy-drama than a gritty noir, and in the end it’s about the family you make when you’re on your own, the ones who will do anything for you—even give you their best wig.

There are some Easter eggs for crime fans, namely that Chester, when we finally meet him, is played by James Ransone—who played Ziggy Sobotka in Season 2 of The Wire. He’s perfectly cast as a guy who can weasel out of anything. He’s great at playing one of those guys I want to smack upside the head. The story is bittersweet and a lot of fun. You’ve probably heard that Tangerine was filmed in its entirety on a handful of iPhone 5s smartphones. I didn’t know that when I watched it, and I couldn’t tell. It looks like a professional digital film—the colors a little harsh in the Los Angeles sun, but easy on the eyes. The film has a guerrilla feel to it, like the old John Waters movies where they filmed without permission. Some of the realism comes from the fact that Mya Taylor, who plays Alexandra, began taking hormones as filming started, and had worked as a prostitute in Hollywood.

Writer-director Sean Baker made a great film with 3 cell phones and an $8 app (plus an iPhone lens adapter and a steadycam rig), which left a lot of budget for locations and extras, making Tangerine look a much bigger production. It’s one of the best new movies I’ve seen on Netflix streaming.