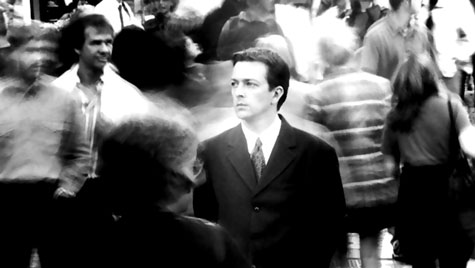 With the digital libraries of online streaming services expanding more and more, choosing which movie to watch has become difficult. I will be digging through these online queues in hope of bringing you a movie worth watching. This time we're taking a look at one of my favorite director's debut project.

Christopher Nolan has become a household name with the commercial success of his Dark Knight trilogy and movies like Inception (2010) and Interstellar (2014), but few are familiar with his first feature film, Following (1998).

Currently streaming on Netflix, this independent, virtually no-budget film is dripping with the style and themes that Nolan is now known for. Twisting and turning through non-linear, parallel plot lines, this neo-noir is gritty and dark—using black-and-white 16mm film to make the already grey London even greyer. Also, contrary to Nolan’s current trend of long-winded, marathon movies that span over 3 hours in some cases, this succinct and to-the-point tale comes in at a mere 70 minutes.

The story follows (see what I did there?) a recounting of a young man’s deposition to a police detective about the events that transpire throughout the film. Nolan’s dizzying and unashamed zigzag through 3 different timelines is sporadically moved forward through the present-tense voice-over of the retelling, all merging together at the film’s climax and somewhat predictable but sufficient reveal. The character narrating the story is billed as “The Young Man” (Jeremy Theobald)—a device Nolan uses for most of the characters of the film (The Blonde, The Bald Guy) to enhance the theme of anonymity and the malleable nature of identity. The only character given a name, Cobb (Alex Haw)—who curiously shares a name with DiCaprio’s character in Inception—is not who he seems, further illustrating Nolan’s attempt at conveying the frivolity of a name.

The Young Man is an unemployed writer who, for inspiration and out of boredom, begins to follow strangers about London. It starts out innocent—he begins to wonder where people go, what they do:

How can I explain? Your eyes pass over the crowd, and if you let them settle on a person, then that person becomes an individual.

He creates his own sets of rules for following people, rather innocuous stuff, making sure not to follow women down dark alleys at night, not to follow the same person twice, and if you found out where a stranger lived or worked, that was it—game over. But just as seemingly every Nolan film sets up these lists of rules (i.e., Memento (2000), The Prestige (2006), Inception (2010)), the Young Man quickly abandons his convictions, which lead to his own downfall.

This curiously apathetic voyeurism-turned-disaster is reminiscent of the Hitchcock classic Rear Window (1954)—although Nolan could have benefitted from a casting of James Stewart and Grace Kelly—but Following doesn’t end so nicely.

The Young Man is confronted by a well-dressed man he has been following who turns out to be a serial burglar. The well-dressed man, who introduces himself as Cobb, is intrigued by The Young Man’s “hobby” and invites him along to one of his burglaries. Once inside a stranger’s home, we realize Cobb is no ordinary burglar, as his gain isn’t monetary, rather, he enjoys shaking up the comfort of a stranger’s existence by taking personal items to remind them of what they have. “You take it away … to show them what they had.” Note: Notice the Batman sticker prominately featured on the door. How could he have known? Is Nolan's directorial career also told through non-linear timelines?

Cobb also enjoys constructing a narrative of the strangers’ lives based on the items in their home. Inspecting the furniture, music and book collections, and even the wine selection, he builds a narrative that seems intuitive and accurate.

Here is where Nolan is at his best.

One of the central motifs of the film is humanity’s natural desire for narrative and storytelling and the inherent unreliability of this, which leads individuals to invent explanations and devise a coherent storyline for everything. He conveys this theme not only within the story itself—through The Young Man’s desire to follow strangers and through Cobb’s analysis of strangers' lives based on their apartments—but also by playing off this desire in the audience watching the film. By chopping up the story in different timelines, the audience doesn’t get all the details at once, so they’re also left trying to piece together the information and construct a narrative to make sense of the mystery—which often leads them astray—setting up the climax and final reveal.

The two continue to burgle homes until they come across a home that belongs to a young, attractive woman, billed as The Blonde (Lucy Russell). After taking some of her photos and a couple of pairs of her panties, The Young Man becomes infatuated with her and decides to strike up a relationship with the woman. Approaching her in a bar, he learns that she used to date a gangster type, The Bald Guy (Dick Bradsell), who is currently blackmailing her with risqué photographs hidden in his safe. Agreeing to steal the photos (along with a large sum of money for his troubles), The Young Man is beginning to realize his innocent curiosity of stranger’s lives has left him spiraling down a dangerous path.

As the burglaries become more personal and the stories more intertwined, The Young Man is increasingly feeling as if he’s been set up. But, once again, the truth is blurred. Our hero and protagonist would like to think he’s on the right side of things—but no one told him to follow strangers, no one told him to break into people’s homes.

As the storylines converge, the film returns to The Young Man's deposition in present-tense as he is starting to realize that the truth may not always set you free.

Overall, this film is a nice, concise example of what Christopher Nolan’s vision and writing would eventually become. Although seemingly nothing new, this film is an enjoyable ride to a predictable climax that mixes elements of mystery, misdirection, and classic noir storytelling and style.