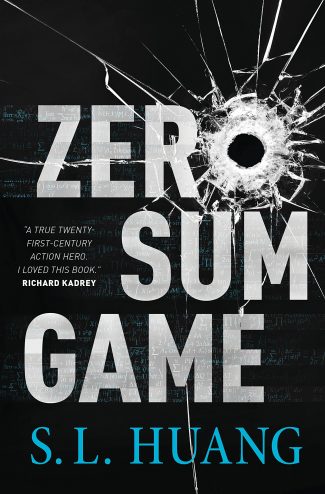 Take a visual tour through Zero Sum Game with GIFnotes!

When it comes to high-voltage action, no genre can touch crime fiction. This is especially true when that action takes place within an engaging narrative where shootouts, fights, and explosions are common and where the author has managed to infuse the story with the humor and crackling dialogue typically found in pulp fiction. In the case of S. L. Huang’s Zero Sum Game, all of the aforementioned elements are in place, and they shine through Cas Russell, Huang’s heroine, who is a truly memorable character.

Cas Russell possesses a special brain that’s wired to be great at math. She’s not just great at it; she can see the implications of mathematical equations—force, speed, and angles—at all times and process them at supercomputer speed. There is a vector calculus blazing through her head that translates into amazing fighting skills and an ability to move through life with the quickness of a scared rodent.

Cas puts her talents to work for other people as a retriever. Simply put, she gets things back to their rightful owners. On one such case, she decides to take on a new job from a young woman she has just rescued and plans to return to her sister. Unfortunately, their case is unlike anything she has ever encountered. There are just too many people trying to get her out of the way, and none of it makes sense. From the FBI to outlaw bikers who try to kill her without uttering a word, there is too much happening, and Cas has a hard time understanding.

She quickly learns there is something at the core of the case, something strange known as Pithica. Finding out exactly what this is will make the difference between staying alive and succumbing to the plethora of bad people trying to put her out of commission. The main problem is that the same brain that has gotten Cas out of trouble her whole life seems to have been touched by someone or something, and there is a chance Cas can’t even trust her own thoughts.

This is a narrative that safely falls within the realm of technothrillers, but it deals as much with things like psychology, memory, and telepathy as it does with computers and the technology of the future. Huang is a talented storyteller with a knack for dialogue and a great sense of humor, and those things meld together in a way that perfectly balances out the many passages of ultraviolence and confusion. Cas Russell is a likable, memorable character who is fully aware of the powers that make here almost superhuman but who is also forced to deal with everyday occurrences like a normal person. Inhabiting that interstitial space between superhuman and regular person is one of the elements that make Zero Sum Game an enjoyable read.

One of the best things about this novel is that Cas is forced to deal with something that scares her, which is not something she is used to feeling. The person at the center of the big revelation, which takes place near the middle of the narrative (something that will not be discussed in detail here to avoid spoilers), is even more powerful than Cas in a way. This is part of the information she receives:

“She can observe the slightest movement of your face, take in the smallest quickening of your breath, phrase a question in exactly the right way, and whether she reads it from the twitch of your eyebrow or you voluntarily tell her yourself, she will know exactly what you are thinking.”

The action in Zero Sum Game comes fast and often, but the spaces in between are filled with enough story to make this one of those rare novels that packs as much dialogue and plot as it does action and violence. Furthermore, this novel also embraces the technothriller aesthetic but keeps pulp elements present at all times. The result is writing that dances between funny conversations, flying bullets, and high-speed chases and which clearly shows that technology is at the core of what is being read:

The other monitor filled with dense programming code. I scrolled, letting my brain relax into it, my headache finally dissipating as the mathematics rose in ghostly shadows, the edges of the algorithms sharpening and focusing into the barest outlines of a skeleton. The code wasn’t a language I recognized—possibly it was one Checker had invented himself—but the structure was familiar; it filtered though my senses and solidified, the commands looping and interlocking through layer after layer of abstraction, the elegant constructions jigsawing deep into the program.

Fans of straightforward crime fiction will find plenty to enjoy here. However, this novel delivers enough to also satisfy those who like futuristic novels, enjoy mysteries and conspiracies, and have a passion for explosive, over-the-top pulp. Huang is a voice to watch, and I’m sure Cas Russell will be back soon with more electrifying adventures.