Review: When You Find Me by P. J. Vernon 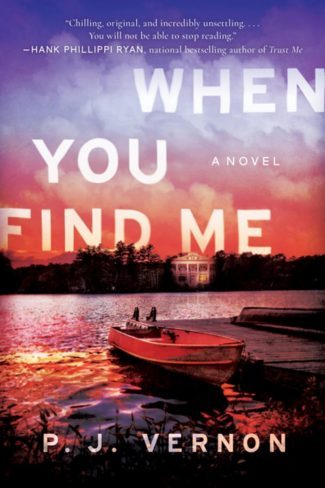 When You Find me

When You Find Me by P. J. Vernon is a debut Southern Gothic tale about an heiress returning home for the holidays who wakes up one morning with a wicked hangover and no trace of her husband.

If you enjoy Southern Gothic chillers, P. J. Vernon’s When You Find Me is the debut for you. It’s Christmastime, and heiress Gray Godfrey (née King) and her husband, Paul, are en route to Elizabeth, South Carolina to celebrate with her mother. If there’s one thing she knows, it’s that she’s going to need more than a few drinks to get through it. After a strained visit to the Christmas Eve services, an old friend of Gray’s invites them to Ruby’s Tavern to celebrate. Obviously, it’s not the ideal place for an alcoholic like Gray, but she agrees. It’s a rolling disaster that only gets worse when she says yes to a dance with her old flame, Jacob.

He lifted my chin with his hand, pulling me close to kiss my mouth.

At least, I think I’d said “no.” I don’t know if I did or not, if it was aloud or only in my head. His lips cute me off, his ashtray flavored tongue inside my mouth.

Sinking into the swirling, sparkling dance floor, I closed my eyes and kissed Jacob back. It was deep. The sort of kiss that brought back a life I’d purposely forgotten.

Of course, Paul sees her and, of course, Paul confronts her. He has every right to be upset. But he sure doesn’t have any right to roughly grab her and pull her away like he owns her. Regardless, Gray doesn’t remember a bit of it the next day because she blacked out, and she doesn’t remember anything between the confrontation and waking up in her bed with a killer hangover and dirt under her fingernails. Paul is nowhere to be found, and as the day wears on, and Paul doesn’t show up or call, Gray begins to worry. She worries for his safety, but she also wonders to herself just how bad it would be if he didn’t come back. Readers will realize by now that theirs is not a happy marriage and that Gray’s alcoholism isn’t just an artifact of marital unhappiness. Certain expectations come with being the oldest daughter in a very prominent South Carolina family, and although she has an ally in her younger sister Charlotte (who recently went through a divorce and is the mother of young twin boys), Gray’s mother Joanna is very, very concerned with appearances. Then there’s Paul. Paul has congressional aspirations, and his disappearance, if it goes on too long, is sure to make waves.

When Paul’s rental is found on the side of the road, Detective Nina Palmer, whose aunt is dying from cancer and used to work for the Kings, waits a bit for the family to call. That move might come back to bite her, because when Paul doesn’t turn up, things start to look very fishy indeed. While the family waits and worries, poor Gray drinks and tries to cope. Then she gets a message from someone named Annie.

“Hi Gray,” she said in the recording. Almost stuttering. “I’m sorry for the late call. You don’t know me. My name’s Annie. I’m calling—” The woman—Annie—paused. “I need to talk to you about Paul. I’ll be back in touch so keep your phone close.”

I held my breath.

“Something else—” A second, longer hesitation. “There’s something going on here that you don’t know.”

Well, if Gray didn’t have visions of Paul having a mistress, she does now. But when evidence turns up that raises the possibility of foul play, Gray’s world officially beings to crumble.

Gray is an exceedingly sympathetic character. It’s evident from the start that she’s not happy, and she hasn’t been for a while. She talks of Paul’s “stinging comments” about any number of things, including her physicality, and says this:

I used to care about things. All sorts of things. Now everything was muted. Static-filled. I still walked amongst sharp blades and needle-like hazards, but their edges had been dulled. It was a broken way of seeing the world. A dangerous one.

Gray also drops hints at something terrible that happened while in the company of her cousin Michael (now a lawyer) in their childhood, and it will send chills down your spine. And of course, this wouldn’t be a proper Southern Gothic tale if it didn’t feature a crumbling, once stately house like Piper Point.

Piper Point was a white antebellum with a double wraparound porch. Six Corinthian columns supported a steep roof dotted with half as many dormers. The Christmas candles in each window did little to lessen its long shadow. They turned the home into a twisted jack-o’-lantern. Ready to swallow me whole.

Of course, like her family home, Gray’s life and the lives of her family have polished veneers, but the rot is starting to peek through. It’s a roller coaster ride to the end, and Vernon offers up plenty of surprises in an assured debut whose prose frequently approaches the poetic. Narratives that alternate between Gray, Nina, and the mysterious Annie will keep you on your toes. Carve out some time for this eerie, atmospheric read, and hold on tight.