Review: When the Lights Go Out by Mary Kubica 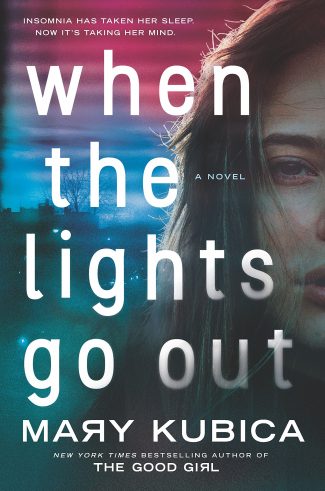 When the Lights Go Out

When the Lights Go Out by Mary Kubica is a riveting and emotionally charged thriller where a woman is forced to question her own identity.

Jessie Sloane was 15 when her beloved mother, Eden, was diagnosed with cancer. The two women had always lived in their own private world, relying on one another for everything, with the only real point of contention between them being the identity of Jessie’s dad. Eden refuses to speak of him, even as the years pass and the cancer both goes into remission and comes roaring back. An older, wiser Jessie cares too much about her mom’s feelings to press the issue, especially with Eden now on her deathbed. The grief of watching her only loved one die is more than enough emotional turmoil for Jessie to handle without adding the complication of a newly discovered father.

When the doctor attending Eden’s bedside notices that Jessie hasn’t slept in several days, he prescribes her a sedative and urges her to try to get some sleep in the empty bed next to her mom’s. After an encounter with a sympathetic stranger in the hospital cafeteria, Jessie downs the pills she’s been given—and later wakes to discover that her mother has died while Jessie was sleeping.

Jessie’s guilt at not being awake for her mother’s final moments causes her body to refuse sleep altogether as she goes through the motions of continuing life without her mom. Emotionally incapable of staying in the Chicago bungalow they shared, Jessie moves into a carriage house apartment behind a greystone where her new landlady lives. But then, she starts hearing and seeing weird things in the night, things that her landlady denies. Jessie would press the issue, but she knows that her chronic insomnia has already started to affect both her physical health and her grip on reality:

As I climb the lopsided steps, I feel the weight of fatigue bearing down on me. Fatigue from physical exertion and fatigue from lack of sleep. I lie down on the mattress, staring at my shaky hands before my eyes. There’s an anemic quality to them. Blanched and mealy, the skin at their edges disappearing somehow, evanescing, like a loose thread being tugged from the hem of a shirt, the whole thing unraveling, coming apart at the seams. That’s me. Coming apart at the seams. Little by little, I’m disappearing.

I look again at my hands, and this time they are fine. Intact.

I close my eyes and even though sleep is there within reach and I stretch my hand out to grab it, it’s unattainable. Elusive and shifty. It moves away, mocking me. Laughing in my face.

For as tired as I am, I still cannot sleep.

As if her grief and insomnia aren’t enough to deal with, she gets a phone call from the college she applied to, telling her that her social security number belongs to a dead woman. She combs through the documents her mom left behind and finds that she has no proof of identity, no birth certificate, no social security card. Suddenly, the isolation she and Eden had lived in for so long begins to take on troubling overtones.

Jessie’s struggle to discover the truth behind her own existence is interspersed with chapters from Eden’s life 20-odd years before, as the young bride and her doting husband decided to have children but discovered, to their dismay, that it was easier decided than done. As Eden and Aaron invest more of their money and hopes in a process that only disappoints, their marriage begins to fray. Aaron works long, odd hours, and Eden feels isolated in their Wisconsin home. When she suggests a solution to both her loneliness and the financial crunch their fertility treatments are putting them in, he responds poorly:

You’re under so much stress already, Aaron said when I suggested applying for a job, and Why not just focus on this?, meaning making a baby, as if somehow I’d been unfocused, and as if that lack of focus was the reason we were still without a child. I’d been too cavalier about it, too casual, too devil-may-care. He didn’t use those words, not a single one of them, and yet that’s exactly what I heard when he came home from work after midnight that night and, though I lamented about being bored all day, about being alone, he suggested I not apply for the job, but rather focus on this, with a sweeping gesture toward my vacuous womb.

Mary Kubica writes movingly about the plight of women who feel pressured to have children in a society that too often overemphasizes the value of their fertility while blaming them for any lack thereof. Little wonder that some women go a little—or in some cases, a lot—crazy when it comes to motherhood, as they’re told that their own feelings are invalid and that they must somehow contort themselves into conforming to society’s conflicting expectations. Together with her sympathetic depiction of insomnia, Ms. Kubica’s effortless marriage of this nightmare of unwanted infertility with the Kafka-esque state of not owning your own identity—particularly in this modern bureaucratic age—results in a thriller at once sensitive and suspenseful. Some readers may be less than thrilled at the twist, but I thought it was written well and made sense in the larger context, though I will never be a great fan of Aaron’s. What I am now is a fan of Ms. Kubica’s—I’m late to this party, I know—and I look forward to diving into her much-lauded back catalog soon.