Review: What Remains of Her by Eric Rickstad 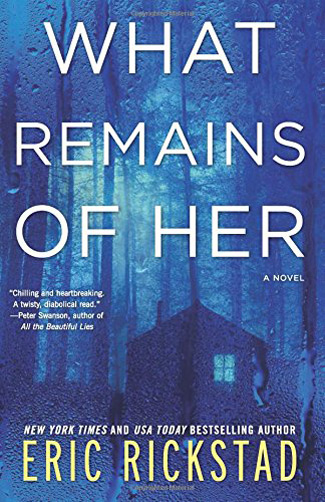 What Remains of Her

What Remains of Her by Eric Rickstad is a chilling, harrowing thriller set in rural Vermont about a recluse who believes the young girl he’s found in the woods is the reincarnation of his missing daughter, returned to help him solve her and his wife’s disappearance.

If you haven’t read anything by Eric Rickstad yet, this would be the perfect place to start. He has a talent for breaking your heart and giving you chills in equal measure, and this one is no exception.

It’s 1987 in rural Vermont, and Jonah Baum is still upset about the argument he had with his wife, Rebecca, the night before. When he returns home from his teaching job at Lyndon State with a bouquet of flowers and a new dress and coat for their seven-year-old little girl, Sally, he’s ready to make up—but neither of them is home. He assumes they’re running errands, but when hours pass and they don’t come home, Jonah starts to panic. He has no choice but to call his childhood friend Maurice, who also happens to be the sheriff, and report them missing.

Maurice’s daughter Lucinda is the same age as Sally and her best friend, and like all little girls, she’s got a secret—and she’s very scared and desperate for Sally to come home. Maurice, meanwhile, must walk a fine line between law enforcement and friend. He assures Jonah that he doesn’t think Jonah did anything to hurt him, but there are also questions that he absolutely must ask. Uncomfortable questions. The tension increases exponentially when strange drawings are found in Sally’s room.

Two crayoned stick figures lay crooked at the bottom of the page. A girl and a woman, maybe. Judging by the hair. Red Xs for eyes. The rest of the page was scribbled in black crayon, except for a bright evening star shining in the top corner.

He’s not the only one. And there are more.

Maurice placed a drawing on the desk. Jonah studied it. The stick figures might easily have been asleep under the night sky, instead of dead. Even with the X eyes. And they might not be Sally or Rebecca. Maybe not even female. Maybe they were Sally and a friend. Lucinda. Or the bossy older girls Sally and Lucinda were always talking about being mean.

No telling what they meant. If anything. But if Rebecca and Sally were not found right away, the drawings would put the spotlight on Jonah. Take the focus off whoever it should be. Jonah couldn’t afford that.

Search parties are formed, and days pass, but Rebecca and Sally are nowhere to be found. Lucinda finally shares the secret about the man they saw in the woods, but nothing comes of that either. Meanwhile, the ghosts of his wife and child haunt Jonah in their home until he can barely take it. Jonah has finally had enough and decides to leave his haunted house.

He took the yellow dress and coat he’d bought Sally, his books of poetry and science and short stories, and what few other cherished belongings would fit into a trunk and drove the truck up to the Gore and settled into the deserted miner’s cabin, where all he asked for was to be left alone to wait for the miraculous return of his daughter and wife.

Twenty-five years later, Jonah still squats in the miner’s cabin, and Lucinda runs a general store in town and serves as deputy while helping to care for her ailing father. Rebecca and Sally were never found, and it’s haunted her all her life. When a little girl named Gretel runs away from her abusive foster parents and is taken in by Jonah—who sees his little girl Sally in her eyes—the town mobilizes to search for another missing little girl. But Jonah is determined to take care of Gretel. The foster parents reported that she was kidnapped, but of course, Lucinda isn’t so sure, and she vows to find her.

What follows is a heartbreaking sequence of events that will tug at the heart of every reader—parent or not. And while there is a compelling mystery at the core of this novel, Rickstad’s lovely writing is transporting, lifting it well beyond the usual mystery/thriller. While some of the subject matter is decidedly grim, there is light at the end of the tunnel, and the surprising twist gives way to a satisfying finale.