Review: What My Sister Knew by Nina Laurin 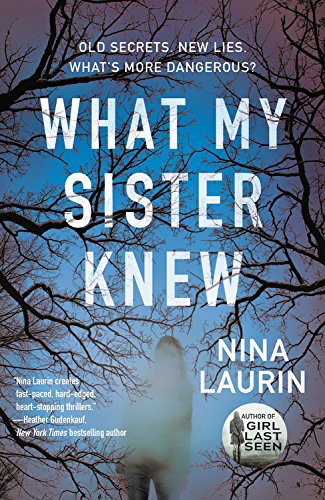 What My Sister Knew

What My Sister Knew by Nina Laurin is a psychological suspense novel that is “a mind-bending ride. Just when you think you’ve discovered the truth, a new secret is revealed.” (Wendy Walker, author of All Is Not Forgotten).

One of the best things a novel can do is keep you guessing, and Nina Laurin’s What My Sister Knew—her sophomore effort—does exactly that. A taut narrative about a woman haunted by her twin brother’s actions, this novel is a smart exploration of that special familial relationship wrapped in a dark, bloody past—which sometimes dips into terrain so creepy and uncertain it resembles a horror novel.

Andrea “Addie” Warren was separated from her twin brother, Eli, at the age of 12. Eli, who was very popular back then, was a problem child, but what he did was monstrous: he was convicted and sentenced to prison for killing their mother and stepfather by burning down their Denver house, starting with the door of the room in which they slept. The events pushed Addie into a new house where her main bully lived and, eventually, a never-ending cycle of struggles with alcoholism, addiction, and petty crime. As a result of her actions, she pushed away everyone in her life. The last one of those people was her fiancé, a man who possessed everything Addie could have hoped for.

When Addie has a car accident 15 years after the tragedy, things get complicated very quickly. First, she can’t explain the accident and isn’t sure if she saw a figure right before crashing. Second, her overbearing adoptive mother forces her to move back in as soon as she leaves the hospital. Lastly, Eli, who was just released from prison, is back in Denver, and he has the police looking for him once again—this time for murdering his girlfriend. It also seems he is trying to get in touch with Addie. More than that, it appears that he has been following her around town. What ensues is a maelstrom of misinformation, hidden agendas, ghosts that never really stayed in the past, and uncertainty.

On the surface, What My Sister Knew is a novel about a shattered family and the events that shaped the lives of two people. However, as soon as you scratch the surface, flawed relationships, ineffective coping mechanisms, vices, doubts, and Addie’s feelings about her brother all come together and become important parts of the narrative in very nuanced ways. This complicated terrain is where Laurin shines. Besides creating a multilayered backstory—which even includes a book written about Eli’s first double murder (readers get to read portions of it between chapters)—Laurin manages to create an oppressive atmosphere that is, at times, as creepy as any good horror novel.

After the accident, Addie is forced to deal with everything from an old bully (her stepsister, home because she’s getting a divorce) to being forced to take an unpaid break from work thanks to her brother’s alleged actions and the bad press her presence can bring her workplace. These situations would be too much for anyone, but Addie is someone who has already gone through a lot, is in the middle of a relationship that may or may not have come to an end, and regularly goes to AA meetings to help her keep her life straight. Watching life crumble around her places the reader in an uncomfortable position, and that only magnifies the dreadful, frustrating atmosphere that permeates the novel.

Another element that merits attention is Laurin’s ability to bring a plethora of texts into her story. There is inner dialogue, text messages, passages from the book about her brother (which she encountered once in a store and ends up listening to in a car by accident), and regular dialogue. The variety helps keep the narrative moving forward and allows the author to build a big, sprawling world across two timelines that add up to a complete, satisfying novel.

Perhaps the best two elements in What My Sister Knew are the main character and secrets, which end up being as crucial as the main character. Addie is the product of a troubled past, but she has the ability to look at herself and analyze her actions. In that regard, she is very human in the sense that she can see that what she’s doing might not be good for her, but she does it anyway. This is especially true in the way she sees her brother, of whom she states at one point: “My brother is easily the most hated person in the country right now.” She knows what he did but feels there is more to the story. She also knows what he is being accused of now, but she still gives him the benefit of the doubt. This multilayered nature is also visible in secondary characters. For example, Figueroa, the detective looking for Eli, is on the right side of the law, but she comes across as a mean-spirited person, which pushes the reader to identify with Addie’s feelings more than with those of the law enforcers looking for the man who is probably responsible for an awful murder.

Much has been written about the sophomore slump in literature, but Laurin has jumped over that hurdle in spectacular fashion. What My Sister Knew is a rich, complex story about the effects of secrets, the lingering consequences of abuse, the inner workings of deeply troubled households, familial love, and the way we are shaped by trauma. Fans of psychological thrillers would be remiss to skip this one.