Review: The Way I Die by Derek Haas 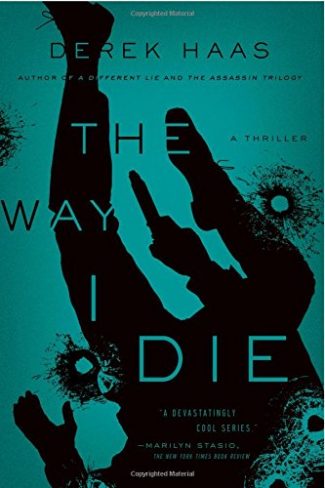 The Way I Die

Ten years after Columbus―one of the most original anti-heroes in contemporary fiction―first exploded onto the scene in The Silver Bear, Derek Haas delivers another riveting thriller with The Way I Die, promising heart-pounding action and shocking twists until the very last page.

Tough guys in crime fiction fall mostly on opposite ends of a spectrum. On one end is the clichéd, broken, hard-drinking tough guy who spends a lot of time beating answers out of people and lighting cigarettes in dark corners. On the other end are characters who don’t shy away from the tough-guy act but who also have enough depth to be interesting, possess a unique code of ethics that makes them likable, and understand crime, violence, and murder in special ways in relation to their own jobs or past.

Derek Haas’s Columbus, who stands at the center of The Assassin Trilogy, belongs to this last group. He is a man who kills for a living, but he is also very smart and has deconstructed his job in more than one way. In The Way I Die, the latest entry in the Columbus series, he is devastated by past events and hiding away in the middle of nowhere, but a new job quickly gets him back into deadly shape.

It is the middle of February on Mackinac Island, a small, cold town off the northern Michigan coast.  Columbus is there hiding away from his wife’s death and having to give up his son for his own safety. All he craves now is silence and isolation, but those two things are hard to come by even in this small town. Soon, he receives a visit and takes a job protecting a man who invented a facial-recognition software that could revolutionize many things—not all of them good. It seems like an easy gig, but the people who want the tech mogul dead are dangerous, and they will stop at nothing to get what they want. What follows is a fast-paced, complicated, and ultraviolent race to save a man and rescue a child that takes Columbus from his hiding place all the way to London and back to the US as the bodies pile and secret agendas make life harder for everyone involved.

The beauty of Haas’s prose comes from his understanding of the economy of language. He knows how to make less into more, and each chapter demonstrates that time and again. The writing in this book is sharp and to the point. The dialogue is clipped and believable, and the internal monologues are usually short and focused on the problem at hand. The result is a narrative in which much is given in few words. People, places, and situations are encapsulated into short paragraphs that get the job done. Take, for example, the entirety of Trafalgar Square, crammed into four sentences:

Trafalgar Square is quiet and cold. A few stragglers loiter, tourists taking selfies with their phones, but most Londoners bustle through without looking at the fountain, their collars pulled up, scarves wound tightly around their necks, earbuds blocking out the world, eyes never leaving the sidewalk except when they come to a street crossing, gazing a few feet in front of them but distant, not seeing at all. The dead-eyed vision of the modern pedestrian. Bad for civilization but great for those of us who don’t want to be seen.

There are two things about The Way I Die that deserve special attention. The first is that, with one more entry into his catalog, Columbus is now easily recognizable as one of the best antiheroes in contemporary crime fiction. The second is that Haas made an effort to bring in enough from the past books in the series to make this read like a standalone novel, and that means that readers not familiar with Columbus can start here if they want to because any point is a good entry point.

While there is much internal debate about killing for hire, there is also a lot of poetry of violence here, and the balance between reflection and action makes for a very entertaining read. Columbus ponders his actions and their consequences, but he is also a professional who is very good at what he does, so he can easily fall into killing mode and accomplish tasks that would be impossible for someone else. This makes him a very cinematic, dynamic character, and it also makes for some great reading:

I shoot the one holding the gun before he realizes what happened so his face has no reaction when it caves in on itself. Blood in brain spatter into the eyes of the two men flanking him, the ones who pummeled me in the flat on Field Street, so I drop them with the next two shots before they have time to wipe their eyes.

In the era of bloated thrillers, a book like The Way I Die is refreshing. It is quick, brutal, and packed with moments of self-reflection and tenderness that balance out all the bloody explosions of violence and evil deeds. In a way, it reads more like a novella, almost demanding to be devoured in one or two sittings, and that is something that most 400-page thrillers fail to accomplish. Furthermore, it proves that Hass is still in fine form and producing the kind of explosive literature that has made him a household name.