Review: Under a Dark Sky by Lori Rader-Day 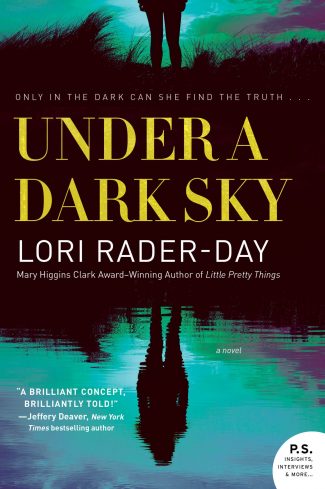 Under a Dark Sky

Under a Dark Sky by Lori Rader-Day is a tense locked-room mystery and a brilliant psychological thriller about a widow trapped in a dark sky park with a ruthless killer.

There’s a reason why Lori Rader-Day has won the Anthony Award and the Mary Higgins Clark Award: She’s really just that good. Her considerable talent is on fine display in Under a Dark Sky, which features a damaged protagonist who will appeal to fans of books like Sheena Kamal’s Nora Watts series and pretty much anything by Karin Slaughter (although Rader-Day’s apocalypses are slightly less cacophonous but no less traumatic than those in Slaughter’s novels).

When 34-year-old Eden Wallace arrives at a Michigan’s Straits Point International Dark Sky Park, she thinks she’ll have a cottage to herself. But it’s immediately evident that she’ll be sharing it with six 20-somethings that seem to be there for a reunion. This is unacceptable to Eden, and she heads to the office to find out if there’s been a mixup with the reservation—the one her husband Bix had made before he died nine months ago.

Why had Bix chosen this place? In the last few months of his life, he had picked up a small interest in the night sky, flipping through a magazine or two, but with no patience, as usual, for reading. Out on the town, he might complain about the orange glow of light pollution. His interest in a wide sky coincided with a few other changes, including a few that I had welcomed. He’d been in the process of chilling out, and if a little astronomy was all it took, so be it. Among the many knotty mysteries of paperwork he’d left behind, this reservation hadn’t been the toughest to solve. The dates were just ahead of our tenth wedding anniversary, and he’d put away a little stash of cash too.

Eden considered letting the reservation go, but widowhood hasn’t been easy. She thought a change of scenery might do her good, but not if she has to share it with six kids barely out of college. Unfortunately, the park has a no-refund policy, so Eden decides—after a bit of prodding from charismatic new arrival Malloy and his vibrant girlfriend, Hillary—to stay the night at least. In fact, the more the group takes over the proceedings, the more Eden feels like she has just as much right to the place as they do. But Eden has a few concerns, including the impending sale of her house and, more pressingly, her debilitating fear of the dark.

How many lights could I leave on in the suite without the rest of them noticing? Without some well-meaning ranger coming to tamp down the glow, which would surely go against the park’s rules, if the light leaked outside. It was too late to get home before dark now. I’d been lulled by Malloy’s smile, by Hillary’s innocence, by their brand-new, bright-eyed relationship.

The house was silent, somehow strangely respectable. Malloy squeezed Hillary to him. They couldn’t bear to be out of touch with one another’s skin, even as they waited for me to agree to gate-crash their first night.

Love. It made no sense.

Wait until they knew. About Bix. About everything. Wait until I had to explain the anniversary was a milestone I wasn’t sure we would have reached if Bix had lived to see it.

Eden’s got a lot on her plate, and she does her best to settle in among these bright-eyed, white-toothed, mostly well-heeled group of friends that seem to have come armed with enough wine to inebriate a small army, courtesy of shy Sam, a distributor. Then, there’s Dev, an aspiring doctor, and his strikingly beautiful and prickly girlfriend, Paris. Redheaded Martha is sharing a room with Sam, although they’re not together—even if Eden gets the distinct impression Sam wishes otherwise. An amateur photographer, Eden spends the early evening trying to get a handle on the group dynamics (her photographer’s eye for detail comes in handy here as well as later on when the stakes become sky high), and although she senses some tension in the group, the evening passes mostly uneventfully.

It’s later that night, after Eden awakens (did I mention that she has insomnia?), that things get bad. Really bad.

A scream draws Eden out of her room, and what she finds is horrifying.

A hand, the fingertips bloody, lay open on the kitchen floor. I saw the hand first and concentrated there, even as the rest of my attention took in Malloy’s body stretched alongside the island, the swipe of blood along the wall to the floor, and then the screwdriver from the abandoned bottle of wine from earlier now stuck into his neck. “Oh, God.” A pool of blood darkened the floor there. “Oh, my God. No, oh no—”

Poor Malloy is most definitely dead—but could one of this group have killed him? As horrible as it is, it’s not Eden’s problem, and all she can think about doing is heading home. Of course, that’s not going to happen for a while. The local police aren’t exactly experienced in this kind of thing, and there’s no doubt another human being stuck that screwdriver in Malloy’s neck. Dealing with this particular group, whose dirty laundry could fill an Olympic-sized pool, may be more than these cops can deal with. So without much else to do, our girl Eden starts sticking her nose into the group’s sordid business, hoping to root out a killer so she can get on with what’s left of her life.

This could have so easily devolved into melodrama, but Rader-Day never lets that happen. Yes, these kids are impetuous and largely self-centered, but their foibles fit. Pain has shaped them and twisted their twinkly-eyed, almost forgivable selfishness into something grotesque. But has it made one of them a murderer? They’re all hiding secrets, and some of them are explosive, but Eden is hiding plenty of skeletons in her own closet. Rader-Day reveals these dark secrets like the slow unfurling of a poisonous flower and imbues each of her characters with enough humanity and complexity so they never descend into caricature.

The tense, crackling murder mystery is more than enough to carry the story (and Malloy isn’t the only casualty), and Rader-Day cleverly sprinkles clues throughout—ones you may not be aware of until the reveal. However, it’s Eden’s path from wounded, aimless widow to self-empowerment (and forgiveness) that makes the journey worth it. I’d love to see more of Eden and the utterly wonderful Officer Bridget Cooley (who reminds me very much of Fargo’s Marge Gunderson, without the pregnancy). Also, I’m positive you’ll be searching around for the nearest dark sky park to visit, and the author helpfully offers some tips on this in the acknowledgments. Settle in once you get your hands on this one because you won’t want to put it down until you finish. This should be a huge hit, and Rader-Day deserves to be a household name.