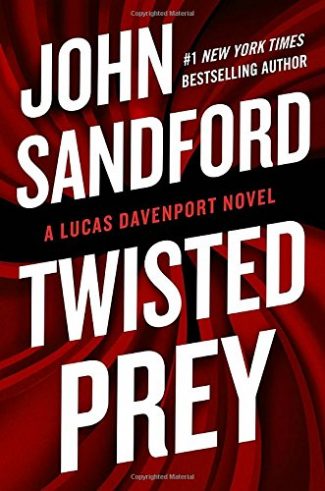 John Sandford is one of those writers whose fertile imagination produces quality mysteries and thrillers so consistently that the rest of us of us mere mortals can only stand and gawp. In this 28th Lucas Davenport novel, our U.S. Marshall hero has been called into Washington, D.C., as a favor to a politician he’s dealt with before. U.S. Senator Porter Smalls is certain he was the target of a political assassination in a vehicular incident that claimed the life of his, shall we say, friend and campaign donor, Cecily Whitehead. Trouble is, there’s no physical evidence to suggest that they were actually run off the road. Porter suspects that the attack was masterminded by his fellow Minnesotan senator, Taryn Grant, with whom he has a long and sordid political history. Knowing that Lucas also wants to bring her to justice after she eluded them for previous crimes, Porter pulls strings to get Lucas onboard the investigation.

Lucas flies to D.C. to take a look at the evidence and discovers that the accident was very carefully orchestrated by professionals who were foiled only by Cecily’s final act of valiant driving. As he begins to peel back the layers of subterfuge to try to see if Taryn really was responsible for the hit, he encounters a shadowy world of mercenaries and profiteers that spans the globe:

The world was opening up to American criminals. The wars in the Middle East and the demand for American blue-collar workers in foreign jobs meant that the brighter crooks were disappearing into the confusion of war and irregular employment.

Others were crossing into western Canada, where the raucous oil sands industry provided income and obscure hideouts, as well as a familiar language. The disaster industry, helped by climate change, provided unregulated construction jobs and opportunities for scam artists in the Caribbean and Mexico.

In the U.S., even casual contact with the law often tripped up fugitives; when they went foreign, that didn’t happen.

Mr. Sandford dives into this murky world, examining where it intersects with politics and greed (and in at least two cases, with sheer sociopathy) to bring us another thrilling installment of the bestselling series. U.S. Marshalls Rae Givens and Bob Matees show up again to assist in their typical wise-cracking fashion. They step in ably when news from the homefront sends Lucas racing back to Minnesota after his wife’s car gets t-boned, putting her in the hospital with serious but fortunately not life-threatening injuries. Lucas and Weather are quickly joined by their daughter, Letty, who shares their use of humor as a coping mechanism:

Weather’s brain was working again, and she asked a hundred questions, and she was still asking questions when Letty pushed through the curtain, looked at Weather’s bruised face, and blurted, “Oh my God.”

“Just what I would expect from a college student,” Weather said. “Oh my God.”

Letty turned to Lucas. “She looks bad, but not so bad she can’t give me a hard time.”

Lucas said, “She’s not good. She’s gonna hurt a lot, and she’s going to be bitchy for weeks.”

“What about the asshole who hit her?” Letty asked. She was a lanky young woman, with striking dark hair and eyes.

“He’s dead,” Lucas said. “He shot himself. Had a whole string of DWIs, just got out of prison for the last one.”

“Good,” Letty said. “That keeps me from the inconvenience of killing him.”

Weather said, “Letty, we need to get you some serious therapy.”

Humor is a hallmark of Mr. Sandford’s novels, and Twisted Prey is no different. It also features a cameo from another of his series heroes, whom Letty flirts with outrageously, much to her dad’s discomfort. The humor serves only to enhance—never distract—the engrossing tale of professional killers caught in a cat-and-mouse game with a team of determined, intelligent U.S. Marshalls.

I was also greatly pleased that the Washington, D.C.-area setting was used to good effect and that I didn’t feel compelled at any point to roll my eyes at a lack of research on my hometown (though I did wonder why the marshalls never took public transport besides the occasional taxi. Our Metro transit system isn’t the greatest but it’s not that bad). And because it’s the nation’s capital, there is quite a bit of political discussion, though Mr. Sandford is skillful enough to couch each character’s opinions in their own voices, thereby ensuring a wealth of differing and realistic viewpoints. The location made Twisted Prey feel that much more compelling for me, though it’s a pretty great read even if you have no personal interest in the area. If you do have an interest in thrillers, though, regardless of setting, the Lucas Davenport series is a must-read, whether you’re starting here or from the very beginning.