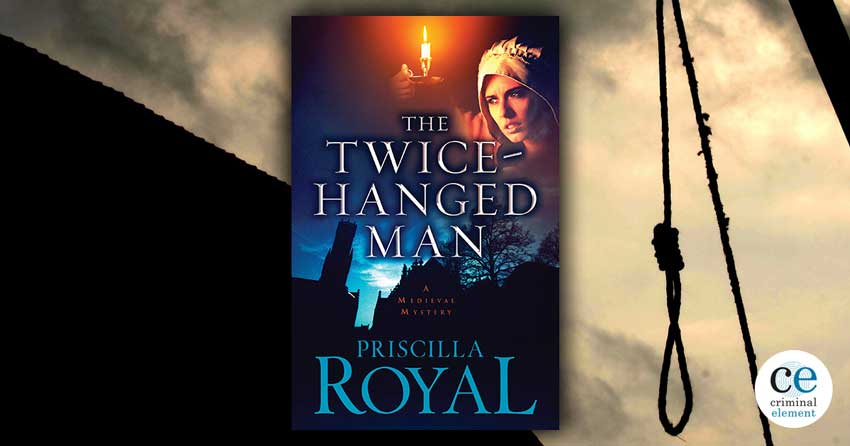 The Twice-Hanged Man by Priscilla Royal is the 15th book in the Medieval Mysteries series, where bodies are turning up and the only suspect is the supposed ghost of a man hanged twice.

Prioress Eleanor already has plenty on her plate—having just escorted her brother Robert and his pregnant wife, Elizabeth, from their imperiled manor to their hunting lodge so Elizabeth could deliver her baby in safety—when the local Abbot arrives with a desperate plea. Only days earlier, the small village in Marcher borderland was rocked by the unusual slaying of its priest, Father Payn. A trustworthy witness saw the culprit—a man who had been hanged twice and must now be a ghost seeking revenge.

“The death of Father Payn is not within the jurisdiction of the king’s law.”

“Please explain,” she said in a kinder tone.

“Father Payn was coming from the village very late at night and took the footpath along the edge of the forest to the abbey. It was there he was vilely murdered. No sooner had he been killed than a witness of good repute, a man named Bardolph, came around a bend in the path and saw the slayer kneeling by the corpse of our dear priest. When Bardolph cried out, the murderer vanished. The body was as warm as life, although the witness found no evidence of breath. The moon was full that night, and no clouds dulled the light. The witness clearly recognized the perpetrator as a man named Hywel.”

“Then surely this Hywel has been arrested.”

Abbot Gerald took time to reply by taking a very slow sip of his wine.

“Hywel is a ghost,” he finally said, “the spirit of a Welsh brigand recently and most justly hanged for murdering good English soldiers in a cowardly raid. Satan has apparently released his sin-blistered soul from Hell to inflict revenge on our innocent village.”

Deeply concerned for a sister-in-law recuperating slowly from the birth of her second child, Eleanor doesn’t want anything to distract her from her family. But she also feels compelled to help a fellow religious and can’t turn her back on his plea to investigate.

Especially when a second man is found dead.

With no reason, he suddenly felt as if a bony hand had steadied him and something, not quite human, was close behind.

There was nothing there but darkness… or at least nothing corporeal.

Shivering, he forcefully reminded himself that he had walked this way many times. He was passing by the gallows and was almost home. Never before had he been bothered by anything from the Devil’s realm. Why should he now?

He reached out to open his door when he felt a touch on his shoulder. He froze. This time he had imagined nothing.

He turned around, slowed by terror.

A silent dark form stood there. Slowly, the creature lifted a hand and pulled back a hood.

He stepped back. “Why are you here?”

That was the last thing he would ever say.

Prioress Eleanor and her companions Brother Thomas and Sister Anne begin questioning the locals—the priest’s former mistress, the hangman, the spice merchant, the sheriff and his household—and struggle to corroborate the initial sighting of the ghost. The whole town is filled with whispers of the spirit, but no one can firmly say they know someone who has truly seen it.

And what of this mysterious Hywel? A Welshman who had been of good standing in his community—was he truly guilty of the crime that sent him to the gallows? Just why had he been hanged twice when the hangman was sure he had died from the first noose? Where is his body, and his brothers, now?

Further complicating matters, Eleanor’s most trusted friend, Brother Thomas, is struggling with his own problems. He’s long fought his love for other men, and encounters with the spice merchant Lambard are driving him to the breaking point. How can he help his Prioress with her investigation when he must hide so much from her?

Priscilla Royal’s latest Medieval Mystery, set during the 13th-century conflicts between Wales and England, has plenty of twists and turns. Royal does an admirable job of crafting characters who are clearly products of the time—even rational, intelligent heroes like Eleanor and Thomas can’t wholly dismiss the possibility of ghostly murderers and demonic imps escaped from Hell.

In a time centuries before fingerprinting, DNA typing, and CCTV, Eleanor and her companions must rely on observation and wit to catch the murderer. The heroes’ reasoning for distinguishing a mortal killer from a supernatural one—“Imps don’t need to knock a man unconscious before delivering a fatal blow.”—is exceeding practical in the face of superstition, while the climactic confrontation with the suspect proves the power of words.

The Medieval Mysteries are often compared to Ellis Peters’s Cadfael series, and while that’s partly warranted—both are set in the borderlands between Wales and England; both feature celibate Christian investigators; both spend time dwelling on the policies of the Church and the inherent fallibility of men—Royal doesn’t quite achieve the same heart and depth as Peters.

Eleanor does find some of the Church’s stances to be extreme—especially when their policies would directly affect her closest friends—but she does little to challenge or subvert them. Poor Brother Thomas suffers greatly from the rigid system of intolerant faith he lives within, and Royal never offers a way out for him.

Royal’s greatest strength lies in her historical details and research. The core story of a twice-hanged man has roots in truth, as does the background conflict between the English King Edward and Welsh princes Dafydd and Llewellyn. The character of Abbot Gerald was based on a man of the same name, and Royal peppers in interesting asides—like how the English army cut down huge sections of forest on either side of roads to prevent Welsh archers from firing upon them—to season the story.

The “supernatural” flourishes are also strong, as we see the murdered men stalked by their killer in genuinely creepy fashions in scenes that would be right at home in a horror flick.

Ultimately, The Twice-Hanged Man—and the rest of the Medieval Mystery series—is solid entertainment for fans of historical fiction who don’t have the time or inclination to read substantial bricks disguised as books. If Ken Follett is too intimidating but you’re still in the mood for a medieval-set tale with some colorful characters and a strong female lead, Priscilla Royal is your gal.