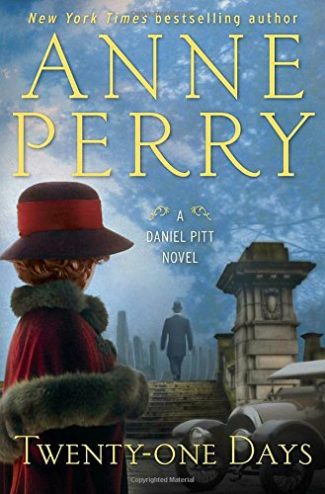 Twenty-one Days by Anne Perry is the first book in the new Daniel Pitt series, where the young lawyer races to save his client from execution while putting himself at odds with his own father: Thomas Pitt, head of London’s Special Police Branch.

Are we back in Thomas Pitt’s London, a world created by Anne Perry, populated with special investigators and criminals, and featuring Police Inspector Thomas Pitt and his well-born wife, Charlotte? No. The year is 1910, and it’s Daniel Pitt, the barrister son of Sir Thomas Pitt, who strides onto center stage. Fledgling lawyer Daniel is not much in contact with his well-connected family in Twenty-one Days, although he forges working relationships and alliances with his legal colleagues.

Unlike his father, Daniel is assured of his social status. His upbringing, his education reading law at Cambridge, his upper-class relatives—all combine to make him confident of his place in the world. Mirroring Thomas Pitt’s way of operating, Daniel is stubborn in the face of authority. He won’t allow himself to be torn away from his first case, even though he risks censure from his superiors.

Sir Thomas Pitt’s son, Daniel, is in the middle of his first case as a barrister when he is summoned to the Old Bailey for an important trial. Renowned biographer Russell Graves is charged with the brutal murder of his wife and Daniel must assist in his defense.

Daniel stays with his first case; fortunately, he wins the day.

“Disobedience won’t always turn out so well,” fford Croft warned, shaking his head. “Well, between the two of you, you have a disaster to rescue.”

“Only an appeal can save Graves, and it needs to be lodged in good time. You have twenty-one days in which to get Graves out of the noose. Twenty days, tomorrow. You, Mr. Pitt, know very little of the law. Mr. Kitteridge, on the other hand, is possibly the best student of the law we have in this firm.”

Unusually, Daniel respects the abilities, insights, and professional contributions of women, including women of the servant class. Remember his parents’ Cockney maid Gracie, who eventually becomes an undercover investigator working alongside Charlotte Pitt? Daniel has a Gracie in his world. Every night when Daniel returns home to his lodging, his landlady, Mrs. Portiscale, invites him to have a cup of tea with her. “He never refused, because if he did she might stop asking.” She always asks how his work is going.

In exchange for her extra attention, Daniel often regaled her with accounts of his cases, though only sharing those elements in the public domain. He had told her about odd witnesses and jurors without ever mentioning names. He was surprised how astute she was at seeing through pretense. She often made guesses that seemed at first to him preposterous, but that turned out to be accurate.

Forensic science is in its infancy in 1910; it’s fascinating stuff—fingerprints and skeletal x-rays turn the tide in Daniel’s trials. He’s a novice in the emerging partnership of criminal defense and science, but he’s dogged and persistent.

Tracking down a way to successfully defend his first client, Daniel knocks on expert witness Dr. Ottershaw’s door at one in the morning: “I do know what time it is—but I have an idea, and Roman Blackwell’s life might rest on it.” Daniel isn’t a skeptic, but he is untutored, which shows on his face when Ottershaw takes him down to the lab. The older man calls him on it.

“Ah!” he said with satisfaction. “You took me for an eccentric, didn’t you? Not at all. Most practical man. Science doesn’t lie, we merely misunderstand her sometimes. We find what we expect to find, or worse still, what we want to.”

Could Ottershaw be pointing a finger at fake data? Nevertheless, Daniel moves to demonstrate the science behind fingerprints in the courtroom. The judge is reluctant to let Daniel proceed: “I do hope this is not a diversionary tactic of desperation, Mr. Pitt?” Perhaps, but Daniel responds immediately, “No, my lord. Far from it.” The jury is skeptical too, but here, Anne Perry skillfully exposes the vulnerabilities of the emerging English middle class. Daniel asks his expert witness if he is “quite sure all people’s fingerprints are different?” and lets Dr. Ottershaw opine.

“You, sir,” he looked at a large, impressive man, very well dressed. It was easy to imagine he had a good opinion of himself. “Your fingerprints are unique to you. They are not exactly the same as those of any other man on earth.”

The juror took it as a compliment, and it showed in his face.

“It matters,” Ottershaw continued. “The whorls, the ridges, the islands, features and dimensions in the lines you can barely see with the naked eye, they are unique to you. More so even than your signature.”

That appeal to the uniqueness of each of the jurors sways the jury. They are convinced the defendant is not guilty because his fingerprints cannot be found on the murder weapon. Doggedness, persistence, a flair for the unusual—these are Daniel’s weapons in the courtroom. He partners with scientists of both sexes, asks (and re-asks) searching questions of the oft-overlooked servant class, and searches out gossip and speculation, all in service of his clients and the law. Twenty-one Days is a very credible and enjoyable debut for the new Daniel Pitt series.