Review: Townies: And Other Stories of Southern Mischief by Eryk Pruitt 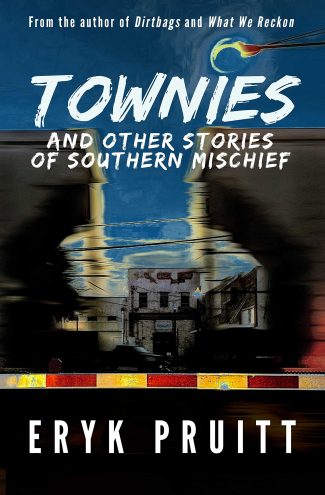 Townies: And Other Stories of Southern Mischief

Townies: And Other Stories of Southern Mischief by Eryk Pruitt is a collection of riveting, funny, and captivating southern-fried crime stories.

Eryk Pruitt is an author who should be on your radar if you enjoy top-notch crime fiction. His previous novels—Hashtag, Dirtbags, and What We Reckon—are packed with action and crackling dialogue. His latest release, Townies, is a short story collection that proves Pruitt is equally good in both formats. In fact, the reduced space, faster pace, and economy of language present in his short fiction place him among the best contemporary crime short story writers.

Townies represents the first time Pruitt’s award-winning short fiction has been collected in a single volume. Coming in at 253 pages of mayhem, bad people, and action, the book offers something for everyone. There are small-town events that acquire legendary status, desperate people on the run who find a way to make the world a better place, family secrets, and even a man escaping his past who finds himself about to fight an invincible beast. The stories range in length and tone, but Pruitt’s voice is like a powerful glue that gives the collection cohesion.

As often happens with full short-story collections, giving a synopsis of every tale would be cumbersome. Instead, here are the highlights:

“The Hoodoo of Sweet Mama Rosa”

There is something special about small-town folklore, and Pruitt captures it beautifully in this one. Inhabiting the interstitial space between creepy, cruel, and humorous, this short narrative about a youngster who can’t wait to make money and who sabotages the man who mows most lawns in town is vivid and wildly entertaining.

At a page and a half, “Knockout” is one of the shortest stories in the book. However, it’s unique structure and strong ending (which is not really an ending—it’s more a promise of bad things to come) make it a master class in effective flash fiction.

The titular tale is one of the most cinematic stories in the book. A woman running from her past falls into something that appears to be worse, but she eventually finds something more than escape—a way to make a difference.

This story of vengeance and making money with fantasy football contains every element that makes Pruitt’s work so enjoyable: violence, dark humor, and economy of language:

The blood pulled beneath her husband, then slithered between the kitchen floor tiles she had only last week re-grouted. Another reason to hate him, although she’d long lost count. Had she bothered to handle things wearing something other than her best ass-jeans, she’d jam the knife into him three or four more times. Plus, he remarked, if so much as a drop of his insides landed on her mahogany cabinetry, there’d be no pulling her off him.

Lastly, “It’s Morning Again in Lake Castor” offers a perfect opening that provides readers a condensed version of what Pruitt pulls off in story after story: pure, straightforward storytelling that is gripping, dark, and never padded with unnecessary descriptions or mediocre dialog:

They pulled Jessi Spangler’s body out of Blood Holler on a dark, grey morning in September of 1985. She’d been half buried just deep enough to discourage the coyotes and buzzards, and the Lake Castor police might never have found her had they not received an anonymous tip in a phone call the night previous. The girl was seventeen years old, beautiful, and very popular in high school.

While the stories mentioned above are some of the best in Townies, the collection doesn’t have any throwaways. The variety of tones and levels of violence and humor vary, but the quality is always the same. Pruitt has a knack for dialog that lets the reader “hear” the accents of those he writes about (mostly folks in small towns in Texas). However, he never writes the accent. Instead, like fellow dialog maestro Joe R. Lansdale, he uses cadence and expressions to convey those voices, and he does so expertly.

Ultimately, Townies is a success because it gives readers the brutality, drugs, murder, guns, and desperate situations they expect to find in crime fiction and then adds elements like social commentary, redemption, humor, and even a bit of dark poetry, which can be found in “A Lot Prettier (When You Smile),” a strange tale of desire and release:

Mistress can no longer manage the air from her lungs. Her trachea convulses. Beneath me, her beautiful torso twists, her hips buck against me. Her precious mouth opens, but offers her so little respite. Her eyes remain fast upon my own. Meanwhile, I’m screaming at her, shouting, pleading at the top of my lungs to release me pull the trigger say the goddamn safe word, but no sound comes from my mouth as my hands wring tighter the life from her. All the while, her eyes … her eyes …”

Polis Books has released some great novels recently, and Townies is a superb addition to their impressive catalog. Pruitt’s writing embodies everything that is right and wrong with Texas and southern mischief. He belongs on lists with fellow southern literary giants like David Joy and Lansdale. His work is engaging, vicious at times, and fun to read. For those not familiar with his writing, this is the perfect starting point. For those who are already fans of Pruitt, this collection is a great snack while they wait for his next novel.