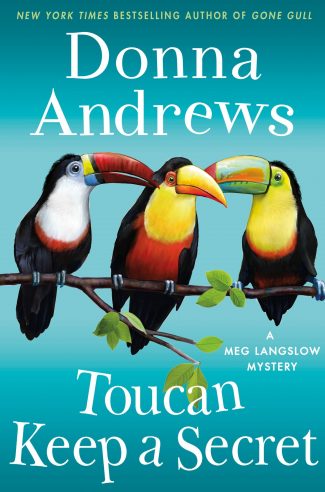 It’s hard to believe that this is the 23rd installment in the Meg Langslow series. For readers who have followed Meg’s journey, it’s easy to see why this series is so popular and successful with cozy fans. Meg is a wonderful character surrounded by a colorful cast in the pleasant setting of Caerphilly. Author Donna Andrews keeps up the wit, humor, and fun while solving copious amounts of murder and mystery. This is definitely one of my favorite cozy mystery series, and I’m always eagerly awaiting her latest addition.

In Toucan Keep a Secret, Meg finds herself thrust into another mystery when she finds a body in the church’s crypt—ahem, that is the columbarium. To make it extra creepy, several of the niches containing the cremated remains have been vandalized, with urns damaged and even opened, spilling their sacred contents on the floor. In the middle of the chaos is a large, red ring.

Soon, Meg and Chief Burke realize that the graves that were tampered with were once involved in a large jewelry robbery almost 30 years ago. With Trinity Episcopal’s reverend on bedrest for her pregnancy, Meg is tasked with getting in touch with the surviving family members of those whose ashes were disturbed to come up with future reburial plans. Along the way, Meg being Meg will find out much more than their wishes as she slowly uncovers the plot and the murderer—but not before becoming a target herself.

One of my first favorite moments in the book is when Meg hears the banging coming from the crypt after everyone has left the church and is deciding what to do. As a writer, it made me chuckle to see her explain the process a bit, and it gives a good deal of insight into Meg’s character for new readers:

My first impulse was to race out and accost the intruder. But I’d recently had a discussion with my dad, an avid reader of mystery books, about the Too Stupid to Live Syndrome.

“It’s one thing to be a strong, independent heroine,” he’d said. “And quite another to go racing unarmed into danger instead of sensibly calling 911. People just don’t do that in real life. I know why authors do it, of course, because if the heroine just sat by and let the police handle everything, there wouldn’t be a book. But still—they should at least make an effort to have their heroines behave intelligently.”

“And why are you picking on heroines?” I’d replied. “Aren’t there male protagonists who race into danger? And yet I bet you’d call them brave for doing exactly the same thing that gets women labeled Too Stupid to Live.”

“An excellent point!” Dad had exclaimed, and we’d gone on to have a lively discussion about sexism in literature and film.

The murder victim wasn’t well-liked in the community, and it is revealed that he had been wanting his wife’s ashes back from the crypt. But it doesn’t explain why the other niches were disturbed or the story behind the found ring. After hearing more about the jewelry robbery, Meg dives deeper into the old, unsolved Van der Lynden mystery. It happened on New Year’s Eve, 1987, as Mrs. Van der Lynden was hosting a party for the Dames of Caerphilly. It was a masked ball where shots were fired, two people were killed, and her famed jewelry collection went missing. Widely considered to be an inside job in town, the locals blamed the crime on Mrs. Van der Lynden’s son, Archie, or even Mrs. Van der Lynden herself. No real answers came of it, and the jewelry stayed missing for years—that is until the ruby ring was found in the crypt next to the dead man.

“Mrs. Van der Lynden agreed to host the party. But unbeknownst to the Dames, she also planned to host a jewel robbery.”

“Wait—she was behind the jewel robbery?”

“I can’t prove it, but that’s always been the conventional wisdom. Her money was running out. Not sure if she mismanaged it or if Archie Senior hadn’t been the financial wizard everyone thought he was, but she was up against it. Me, I’d have suggested she find a millionaire to buy the estate, move someplace that was merely huge, and she could probably have hung on to the baubles. But she didn’t think that way. She wanted to have her jewels and her palace and the money, too. So—they never proved this, mind you; a lot of conflicting testimony, but here’s what I think happened—she decided to pull an insurance fraud. Told Archie Junior to arrange a fake robbery. You ask me that was her first mistake—relying on him for anything.”

“Why did she need to involve him?” I asked. “She could hide the jewels, break a window, and call the cops.”

“I think she had a premonition that the insurance company would be suspicious,” Fred said. “So her plan was a little more convoluted. At the beginning of the party, she took a couple of the Dames upstairs with her—to help her pick out which jewels to wear.”

“Thus establishing that the jewels were present and accounted for at the beginning of the party.”

“Exactly. Then just before midnight, when everyone was gathering around the TV set to watch the ball descend in Times Square—“

“You’d think rich people could find some more exciting way to mark the occasion,” I commented.

One of my favorite things in Toucan Keep a Secret is Ragnarsheim—the mansion that Mrs. Van der Lynden lived in when the crime occurred. Since then, it has gone through two different owners and now belongs to an aging metal rock star that has turned it into his private Gothic estate. Meg worked on some of the wrought-iron decorations at the house for the owner, Ragnar Ragnarsen. He was known to take in unfortunates and people who were down on their luck, leaving the estate filled with new and strange faces.

Two large brick pillars flanked the asphalt driveway leading into what was now Ragnar’s house. I had no idea if the pillars had even existed in 1987, but in Mrs. Winkleson’s day, they’d been painted white. One of Ragnar’s first improvements—to his mind, at least—had been to paint them an inky matte black. He’d also replaced the round white concrete balls that had previously topped the pillars with large, menacing gray gargoyles. The black wrought-iron gate was a holdover from Mrs. Winkleson’s reign, allowed to stay because it was, after all, black and made of wrought iron, one of Ragnar’s favorite things in the universe. But unbeknownst to the gate, its days were numbered. Ragnar wanted it replaced with a larger and much more elaborate gate. With dragons.

Meg’s dad soon gets the idea that a reenactment at the mansion is just the way to figure out what really happened on that night so long ago. Given how much the home has changed since then, Meg tries to entertain his idea.

Now the steps were lined on either side by elaborate statues of dragons and castles and armored warriors.

“Oh, dear,” Dad said. “That’s going to make an authentic re-creation of the start of the party rather difficult.”

I stifled the urge to ask who cared about the start of the party—wasn’t it the actual jewel robbery we were interested in?

“You mean the statues?” I asked.

“Actually, they’re not,” I said. “They’re chess pieces. The back terrace has a giant chessboard made of black and white marble tiles, and when he wants to have an outdoor game, he just gets everybody to help him haul all the statues around to the back terrace.”

This was a fun whodunit and a worthy addition to this wonderful series. We get to spend a lot of time with Meg in this one, as the mystery unfolds without much intervention from the usual cast of characters. Andrews does an expert job at keeping the reader informed so that this book can be read alone without having to start at the beginning of the series. A satisfying ending with a twisty reveal—Andrews has done it again. Pick up Toucan Keep a Secret to continue the series or begin your journey with Meg here—either way, you won’t be disappointed.

Read an excerpt from Toucan Keep a Secret!