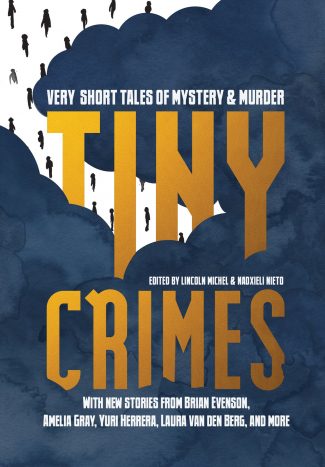 Tiny Crimes, edited by Lincoln Michel and Nadxieli Nieto, is a collection of 40 very short stories that reimagine the genre of crime writing from some of today’s most imaginative and thrilling writers.

This introductory paragraph to Tiny Crimes—a collection of super short, teeny-tiny, itty-bitty tales of murder and mayhem, which were edited by Lincoln Michel and Nadxieli Nieto—may actually be longer than some of the stories in the collection itself. With stories by such authorial luminaries as Amelia Gray, Laura van den Berg, and Benjamin Percy, Tiny Crimes covers a lot of ground in such a … well … tiny space. Name a crime, and you’ll find it here.

There does seem to be quite a few “disgruntled employee” pieces, but I’m sure that’s fine and not at all indicative of business culture.

Michel and Nieto and all of the authors have done a superb job creating a kaleidoscope of death and dismemberment. I’ve chosen a couple of pieces to talk about, but because the stories are all so short, I’m afraid to give anything away—so this review will be, um, kind of short. And, due to the large number of pieces in this collection, I’ve chosen to talk about pieces that I thought had an extra level of suaveness in execution.

The first story in this little collection, and the first story about disgruntled employees, is “Circuit City” by J. Robert Lennon. I have no idea what the “J” stands for in J. Robert Lennon, but I kind of wonder if it’s “John.” Because every character in this story is named John. You may think that would get sort of obnoxious, but instead, it’s hilarious. Somehow, Lennon manages to not make the John-situation confusing. You always know which John is doing what. You know which John is the victim and which is the murderer. (Spoiler: John is the murderer.)

We all were wearing the red shirts required of all employees. John wore the required red shirt as well, but upon his required shirt was embroidered the word “manager.” Because we didn’t like John, we called him Manager.

“Manager, this customer is looking for a game controller.”

“Manager, this customer would like to return these cables.”

“Stop calling me that.”

Another story with an impressive feat of language is Carmen Maria Machado’s “Mary When You Follow Her,” which is a single sentence that stretches five pages. The effect is a kind of breathless movement that drives the suspense forward.

Then, you’ve got Adam Hirsch’s “Airport Paperback” in which the language that is removed creates the tension and the mystery:

And among these English language wizards, you have several tiny stories in translation. From French to Japanese, there are stories that appear side-by-side in their original language and in English. Michel and Nieto’s choice to showcase these stories in a multi-lingual format adds an extra dimension to the collection: the human experiences of crime are universal.

If I tell you any more, I’d ruin everything. So I’ll stop here and tell you that Lincoln Michel and Nadxieli Nieto’s Tiny Crimes is the perfect book to take with you to any airport, any doctor’s office, any police station … well, anywhere you need to take a break from the world and experience some good stories.