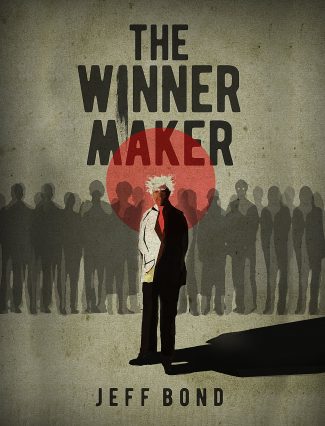 The Winner Maker by Jeff Bond is a thriller about a legendary teacher/mentor gone missing and four of his former “Winners” who are forced to dig into their pasts and change their lives forever.

The Winner Maker is a fast-paced hunt to find a missing teacher and one of his students, but the story is wrapped inside the high school memories and present-day lives of Bob Fiske’s “Winners.” The job of youth, some say, is to become educated, but Fiske envisions a more grandiose future for his elite, hand-picked cadre of students. He exhorts them to “Live Big!”

“Education should not be the filling of a pail, but the lighting of a fire.” — William Butler Yeats

Four former Winners get a letter delivered by the low-tech method of a FedEx Express overnight delivery. The recipients include Stephanie Reese (née Mills) and her husband, Doug. Steph is in advertising, and Doug’s a finance guy, “swapping dollars for rupees at seven a.m.” The contents make Steph Reece’s heart lurch, and “Steph Reece was no fainter.” After deciding to wait until after breakfast to talk with Doug, Steph is flooded with memories of high school, a decade ago.

Those bright, towering emotions. Pride. Elation. Teeth-grinding sorrow. Episodes that lived on forever: a tearful conversation at prom, a might’ve-been on the shores of Lake Michigan, that first summer with a car when you felt adult and in control of events … even if you weren’t. Not even close.

Even accounting for teen drama, Steph’s memories sound par for the course. Fiske, however, was the difference maker for her and the others. His passion to struggle for righteous causes helped the entire student body, like “Title IX-style gender equity and mandatory campus nutrition,” as well as him personally funding Latin classes that were on the chopping block. But it was Fiske’s credo with his Winners—both during high school and continuing into college and beyond—that set him apart from high school mentors that are important for a time and then fade into memory. Steph’s mother refused to send her to Stanford, saying her five kids should all “receive identical state-school educations,” but Fiske overruled her and paid for Steph’s first two years at Stanford.

It was the sort of extraordinary act he undertook for Winners. “Whatever you need, whenever you need it,” he’d pledge. “Anything to help achieve the life you’re meant for.”

No pressure, huh? Fiske’s promise to help his Winners achieve their dreams came with a demand: that they would “pledge in return to pursue success with reckless abandon.” It’s somewhat of a ticking time bomb; Fiske’s Winners never escape from the pledge. Which is why the four former Winners drop everything to find him—Steph, Doug, Lydia Brockert (a psychology professor at UChicago), and Eric Pinkersby (former HS nerd, now a West Coast tech guy with a high-flying career).

Steph breaks into Fiske’s apartment, hoping to find a clue as to his whereabouts. Like an eavesdropper never overhearing anything good, she finds herself listed in a file marked Disappointments.

The list had eighteen items, from the predictable (Clinton/Obama presidencies, #16; CTU collection bargaining, #11) to the mysterious (Tranquility, #7). When her eyes reached the last item on the list, number one, she lost her stomach.

The knowledge gnaws at her, but she sets it aside. Steph finds a clue in Fiske’s apartment that points them in the direction of UP—the Upper Peninsula, a designation known to anyone who grew up near Michigan. Adding to the urgency of their quest, not only is Fiske missing but so is one of his current female students. Unsurprisingly, rumors spring up of “inappropriate meetings” between Fiske and his student. It seems “the Great Man’s reputation is in shambles.”

The core question of The Winner Maker is whether Fiske is a “legendary mentor” or “an elitist whose time has passed.” Like it or not, Steph, Doug, Lydia, and Eric must revisit their past to solve the mystery of their teacher’s disappearance. A quote from L.P. Hartley’s The Go-Between comes to mind, “The past is a foreign country; they do things differently there.” Jeff Bond’s The Winner Maker is a mystery and a quest that changes the trajectory of four lives forever.