Book Review: The Wages of Sin by Kaite Welsh 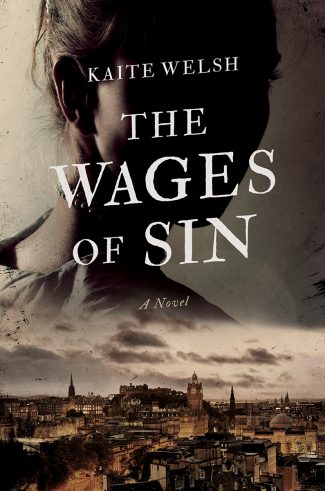 The Wages of Sin

The Wages of Sin by Kaite Welsh is a page-turning tale of murder, subversion, and vice in which a female medical student in Victorian Edinburgh is drawn into a murder investigation when she recognizes one of the corpses in her anatomy lecture.

A prostitute is murdered in late-nineteenth-century Edinburgh, and no one cares. The early demise of a woman of ill repute is of no concern to the Scottish capital’s society, high or low. No one, that is, apart from Miss Sarah Gilchrist, who is studying at the University of Edinburgh’s medical school.

The year is 1882, and it’s the first time women have been allowed admission to the school. Sarah is studying to be a doctor despite stern opposition from her family, the establishment, and society in general. This is a time when women are deemed inferior to men, and the behavior of men—in public and private—reflects this in many different ways. Brothels, where fallen women ply their trade, are sneered at and whispered about, yet the veil of double standards—which knows no bounds—is thrown over these establishments so members of the higher echelons of society can avail themselves of the wares, safe from people they consider nosy liberals or those with prying eyes.

One would not expect a young woman of Sarah’s position to come into contact with people from that world, but she feels an affinity for those less fortunate than herself, as she had to flee London from a scandal that branded her a fallen woman. In Edinburgh, she hopes to rebuild her life and move on in her profession of choice: medicine. When she is not studying or attending lectures, she gives help and medical advice to those who live on and under the streets of an Edinburgh that is a world away from the cosy drawing rooms, fine port, and cigars of high-society Scotland.

Unexpectedly, one of the poor young women she has come into contact with ends up on the slab in the medical school, ready for a class to learn the finer points of anatomy. The fact that Sarah thinks the girl may have been been murdered is of no matter. She is dead, and how the people come to meet their fate before they contribute to the learning of young medical students is of no concern to the authorities or the University.

Sarah sets off on a trail to find out exactly what happened to the unfortunate young woman. Fallen women deserve justice the same as anyone else. The journey takes her on a dangerous path—a very dangerous one, indeed. Sarah investigates in a way Sherlock Homes would have been proud of, but there is one problem: she has no Watson is in the shadows to protect her back.

I stepped into the entrance hall, nearly walking into a man who had come downstairs. Given his rumpled appearance and the silence from the room above the parlor, I suspected he had been one of the men upstairs, but which, I couldn’t possibly imagine. I tried not to stare after him as he left, wondering what on earth persuaded him to do what he had recently been doing—not to mention exactly what it was he had been engaged in. A few moments after the door slammed shut behind him, a lithe young man of around eighteen with a shock of black hair and a slightly pinched-looking face slouched downstairs. He glanced at me and smirked.

“Another new girl, Mother McAllister?” he asked. I didn’t stay to hear her reply.

I stepped into the street hesitantly, the twilight having given place to lurking darkness. Although the narrow, winding cobbled path was sheltered by tenements from the harsh November winds, it somehow seemed colder down here. Figures shoved past me, without a word of apology. I would be lucky to emerge with my purse, not to mention what little was left of my virtue. I couldn’t imagine living here, although people clearly did.

I walked steadily onward, refusing to turn and flee back to the light, much as I dearly wanted to.

I don’t know how many tasks Kaite Welsh set out for herself when planning to write The Wages of Sin, but what she has achieved—for me—is a top-class crime thriller, a riveting social documentary, and a fascinating historical novel. Three for the price of one. No Scotsman I know, including myself, would be able to resist a bargain of such immense quality—and neither should anyone else. Brilliant writing will continue to pour from her pen, and I suspect she will continue to set the bar even higher than she already has with this book—her first, and a total gem.

The central characters are strong and well-drawn without being contrived. She captures the setting of old Edinburgh perfectly. I was brought up there, and many parts of the city have not changed in the slightest since 1872. The slimy, dripping walls of the tenements, with their human flotsam hoping for a better day to come, sitting strangely with the homes and lifestyles of the rich and powerful living lives so opulent it would take your breath away. Neither knows of the others’ existence unless they meet in the brothels and drug dens of a town in a country with weather so foul it would make a grown person drop to their knees and pray for warmer climes.

The writing is sublime, and Kaite Welsh doesn’t hold back with her powers of description:

I saw myself through Fiona’s world-weary tired eyes—a naïve young lady wandering the slums like a tourist along the streets of Paris, protected only by the false sense of invulnerability that wealth and privilege afforded.

If this book sells like I think it will, then Kaite Welsh’s Wages of Sin will be considerable.

See also: Review: I See You by Clare Mackintosh