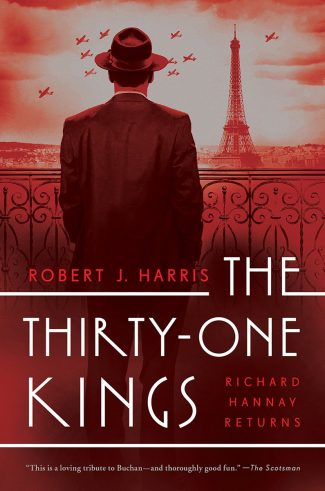 Richard Hannay returns to action in The Thirty-One Kings by Robert J. Harris, a new spy thriller set in wartime Paris, where John Buchan’s famed hero races to track down a mysterious figure holding vital war secrets before the Nazis beat him to it.

On the cover of Richard J. Harris’s The Thirty-One Kings, a succinct message: Richard Hannay Returns. Hannay is a creation of Scottish novelist John Buchan, and the hero of The Thirty-Nine Steps, Greenmantle, and Mr. Standfast. The Guardian describes soldier-spy Hannay’s appeal very well.

Richard Hannay is, like his American brother Philip Marlowe, a modern knight errant. Charging through a hypocritical world, he is a seeker after truth with a boundless love of nature, a liking for simple pleasures and a hatred of pettiness and snobberies.

While walking with his wife, Mary, in the Scottish countryside, Richard Hannay hears a plane. The year is 1940: “That reverberation in the air brought back memories very different from my boyhood in the Scottish Lowlands.” Hannay is reminded of his exploits during the Great War, a time when he was pitched “into a deadly cat-and-mouse game with the Black Stone.” It was commonplace for him “to be sent off on a perilous mission across enemy territory.”

But now that a fresh conflict had broken out, it appeared that no one required the services of Richard Hannay.

Upon the declaration of war with Germany, I had immediately telegraphed the War Office, asking that my commission be reinstated so that I could play a full part in the struggle to come.

Hannay is most disturbed to be told by bloodless government functionaries to bide his time. “Bide my time! With Europe going up in flames!” Hannay and his older compatriots are champing at the bit to fight “a dreadful iron order that crushed all under the wheels of its relentless advance.” William Shakespeare’s Henry V says it best.

Once more unto the breach, dear friends, once more;

Or close the wall up with our English dead.

In peace there’s nothing so becomes a man

As modest stillness and humility:

But when the blast of war blows in our ears,

Then imitate the action of the tiger.

The quiet of Richard and Mary’s stroll is abruptly disturbed by a “dull boom.” The plane they heard in the distance crashes. They try to free the young pilot from the blazing ruins of his plane, but “he had suffered terrible internal injuries from the impact of the crash.” Richard’s intuition, invaluable to him in the past, doesn’t fail him: He senses the pilot is looking for him—and when the dying man croaks “General Hannay,” he is on high alert. The pilot mutters confusing phrases, “London trails … latest Dickens … missing page,” but his last words are mystifying: “Thirty-one kings,” he whispered with his dying breath. “Find the thirty-one kings!”

Richard goes straight to London to unravel the mystery of the pilot’s cryptic message. He tracks down a former colleague, American John Scantlebury Blenkiron (who draws a pistol on him!), and discovers he’s been deliberately kept him on ice. Hannay is not amused: “‘I have to say, you’ve taken your time bringing me into this network of yours,’ I said, trying my best not to sound peevish.” Blenkiron explains:

All along you’ve been the ace up my sleeve, and I wanted to keep you well out of the picture in the hope that people on both sides might forget all about Richard Hannay.

Hannay will not be ignored, “Who on earth are the thirty-one kings?” Blenkiron says a man by the name of Mr. Roland has been sending coded messages to London, saying that he has “vital information” about the thirty-one kings and that “the whole future of the war could hang on it.” There’s a Biblical explanation: The Book of Joshua recounts that Joshua defeated thirty-one kings “when he conquered the promised land.” But what does that have to do with the outcome of the war?

Blenkiron would like to interrogate Roland, but it appears that Klingsor, a German agent, has captured him. The Germans “got wind of this too and it set Berlin buzzing.” The Germans are desperate to find Roland and spirit him out of Paris because, in a few days, “their own army will be goose-stepping down the Champs-Elysees.” Hannay is aghast.

The old warhorse has a mission, but it won’t be easy. Blenkiron sums it up:

“So wherever Klingsor is holding Mr. Roland, he only has to sit tight and the Reich will come to him,” Blenkiron continued. “What we have to do is find Roland, bust him out and get him back to London pronto. And because of this open-city policy it can’t be a military operation.” He eyed me squarely. “I need you to go in as a civilian.”

A civilian? Hannay isn’t sure he’s up for such a perilous caper, but it’s an offer that he can’t refuse. Blenkiron says no one else will do, that’s he trusts no one more in the whole world—and that Hannay has a “knack for pulling off this kind of a job.”

“I don’t know that I’d call it a knack. It’s most sheer stubbornness and luck.”

“Whatever’s at the bottom of it, somehow you always hit the target square in the bull’s-eye.”

Chapter 12 is titled “A Knight Errant.” An apt name for Hannay’s forlorn, dangerous quest. Paris is somber and quiet as it awaits the German invasion. Harris captures the bleak mood masterfully.

On some of the side streets dispirited civilians were pulling down barricades which had been rendered futile by the surrender of the city. I felt as if we were driving through the aftermath of a battle that had already been lost. I was such a bleak spectacle.

John Buchan foretold in Sick Heart River, his final novel, “that with the outbreak of a second world war Richard Hannay and all his companions of old would be going back into action.” In the capable hands of Robert J. Harris, their adventures come alive once more in The Thirty-One Kings. Welcome back, Richard Hannay. Readers will flock to tales of derring-do, underlaid with patriotic courage and characteristically British stiff-upper-lip.