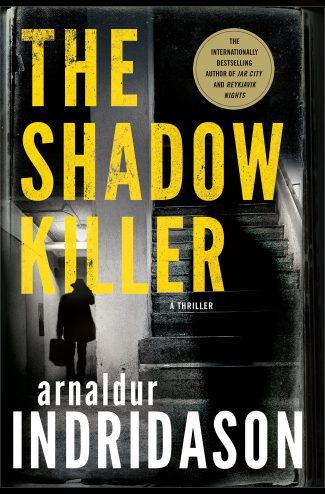 The Shadow Killer is the extraordinary second book in the compelling new Flovent and Thorson thriller series from award-winning Icelandic author Arnaldur Indridason.

Set in Reykjavik, Iceland, during World War II, The Shadow Killer is the second book in the series, but it tells the story of the first case worked by the main characters, Flovent and Thorson.

I will admit to already being a huge fan of Indridason’s Inspector Erlandur series. When I realized this was part of a new series, I knew I had to read it—and get my hands on the first book. It did not disappoint, nor did this one.

Iceland was occupied during World War II. First by the British, and then by the United States. German submarines prowled off the coast, so the Allied wanted to know their movements as much as the Germans wanted information on the whereabouts of Allied ships.

The Nationalist Party had been active in pre-war Iceland. Once the war was underway, members who didn’t renounce the party were shipped to Britain. None of this was in my history books, but I found it fascinating. Right along with the murder mystery.

Another interesting aspect of the time period in Iceland is something called The Situation. When the British forces came to the country, young women were impressed. They were even more impressed when the U.S. forces landed. Even though few spoke English and almost none of the men spoke Icelandic, that didn’t slow them down. The older generation and younger local men disapproved of The Situation, not without reason. The young women were often lied to and taken advantage of.

Watching old war movies, I was not unfamiliar with the idea of war brides. But most showed the phenomenon in a positive light. Poor, young Italian or French women falling in love with American soldiers and being brought to a better life in the United States. How many fell in love—or thought they were in love—without getting the happy ending they thought they would? How many married and moved only to never see their families again?

Flovent is a local cop and a recent addition to the detective force. He trained in Edinburgh with the Scotland Yard. His new-fangled ways are not totally accepted by the rest of the force. Thorson is a West Icelander, born and raised in Canada by Icelandic parents. He is with the United States Military Police. He is made valuable by his ability to speak the “local lingo.”

On the steps he passed the Icelandic government minister and his two companions conferring in low voices, confident that no one could follow what they were saying. Thorson paused when he heard Churchill’s name.

“… but they won’t know yet,” said the minister, who was somewhat older than his companions. “Of course, it’ll have to be kept hush-hush.”

“It seems highly unlikely,” said one of the other men. “That he’ll come here.”

“Well, they aren’t ruling it out. There’s no more information as yet, but they’re hoping for the best.”

The three men glanced at Thorson, who smirked blithely as if he didn’t understand a word they said, then continued down the steps to his jeep.

What at first looks like a straightforward murder leads the pair to several parts of the country and into interactions with U.S. and British Military forces as well as Icelanders of all different walks of life. Renowned scientists, housekeepers, salesmen, farmers, and laundresses all share information with the two police officers. Some more willingly than others.

There was a commotion outside in the corridor, caused, Flovent guessed, by the arrival of Olafia. He had sent for her to identify the body of her tenant. He went out to greet her and was told I no uncertain terms that she wasn’t pleased about being dragged out to this horrible place. She was exhausted, she said. The day had been dreadfully difficult for her. A brutal murder had been committed in her house. Its reputation had been ruined. Her expectations had been ruined. She, who was always so scrupulous in everything, so very particular about selecting her tenants. Only respectable people. With no more than two children.”

“I found the poor man lying on the floor, what more do you want?” she asked as Flovent showed her into the mortuary.

“I’m afraid we need to take care of this formality as quickly as possible,” he explained. “I don’t know how clearly you were able to see him, ma’am, but I have to state in my report that you formally identified your tenant. We need to contact the man’s family and –“

I obviously read a lot of mysteries, and I pride myself on being able to stay one step ahead of the detectives I’m reading about. That doesn’t lessen my enjoyment unless I figure everything out in the first chapter. No worries here. I followed Flovent and Thorson around Iceland, changing my mind with every chapter—sometimes more than once per chapter—because the author doesn’t give the reader a glimpse into the killer’s point of view or a hint as to motive. And that is what kept me guessing right up to the end.