September 5, 2017
The Seagull by Ann Cleeves is the eighth book in the Vera Stanhope series—a searing novel about corruption deep in the heart of a community and fragile, fracturing family relationships. 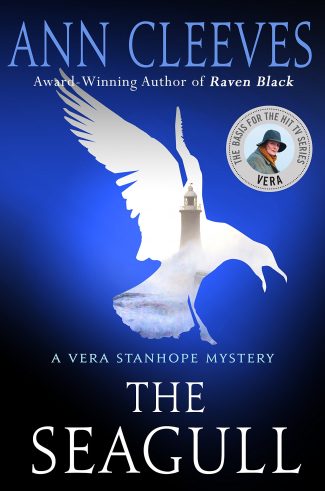 As a former theatre professional, I spent far too much time thinking of parallels between this book—Ann Cleeves’s 8th DI Vera Stanhope mystery—and the Chekhov play of the same name. Yes, almost all the violence happens off-stage—or at least outside of the continuous present-day narrative—and yes, there are tangles of interpersonal narratives loosely grouped together in fours. But the main things the two works of fiction have in common are the themes of guilt, obsessive love, and parenting at a remove, whether physical or emotional.

It’s this last that plunges our heroine into trouble, as an elderly prisoner wants Vera to check in on his daughter Patty in exchange for information. Former Police Superintendent John Brace was close friends with Vera’s father, Hector—the two of them comprising half of the Gang of Four that made light of local laws, culminating in the murder of a game warden. Vera was instrumental in John’s arrest for the corruption that he considered a necessary part of the business of policing.

Of the rest of the gang, Hector escaped a similar sentence by virtue of dementia then death. The mysterious “Prof” disappeared, as did wheeler-dealer Robbie Marshall, who was rumored to have far-flung criminal connections. Now, John is willing to tell Vera where Robbie’s body is, so long as she helps Patty cope with the aftermath of her husband walking out on their family.

Vera is hardly the maternal type, but her natural sense of nosiness compels her to agree. When digging up Robbie’s makeshift grave turns up not one body but two, Vera finds herself investigating a series of crimes that stretches decades from her own past and into a murderous present. No one is as they seem as Vera and her team sort through shifting identities to track down murderers and victims alike.

This team is its own—thankfully law-abiding—Gang of Four, with never married, childless Vera as their imperious if not anxiety-free mother figure. As they wait for the forensic investigators to finish working on Robbie’s grave, she reflects on her team:

She wasn’t sure what [a passerby would] make of the four people gathered on the rock, watching: Charlie in his ancient overcoat, smoking a tab and turning away from the others to blow away the smoke; Holly managing to look smart and sophisticated, despite her obvious discomfort; Joe intent and anxious, staring at the men carefully lifting boulders from the mouth of the culvert; and Vera—Vera, so big that she dwarfed the rest of them. Sometimes she worried that she swamped them with her personality and her prejudices too, and that she didn’t give them the space or the confidence to make their own decisions. But, she told herself now, she was usually right, and she wouldn’t be doing them any favours if she let them make their own mistakes.

This inherent guilt of motherhood is echoed in the passages written from Patty’s point of view, as the clinically depressed young woman struggles to raise three children on her own. Vera is surprised to find herself having an easier time handling Patty than she does untangling the vague connections that all seem to lead back to The Seagull, the ritzy nightclub that once dominated the Whitley Bay social scene, and to Robbie’s involvement with the not-so-legitimate businessmen behind it:

[Vera] was starting to feel out of her depth. Her professional world was different from this. She understood family drama and small people fighting against the odds. The murderers she’d caught hadn’t been gangland monsters, but rather pathetic little men, lacking control or the intelligence to sort out their problems without resorting to violence. She’d had no experience of organized crime until she’d worked to get John Brace put away, and even then his villainy had been local. He’d been a big fish in a very small pool. For her, gangland killings carried out to exert power or settle scores were the stuff of bad television, not real life.

Much as with Chekhov’s Seagull, I’m honestly not sure how I felt about the ending. Ann Cleeves writes in the finest tradition of British police procedurals, with clever plot twists and—to a large extent—justice meted out at the hand of (and occasionally in spite of) the law. But I’m not sure if justice was really served here. I suppose that the ending was meant to be irresolute, but I do so like seeing monstrous parents get their just desserts. As it stands, though, The Seagull—in both versions—offers a realistic portrayal of love and the bonds that sometimes only violent death can break.

More: Read an excerpt from The Seagull