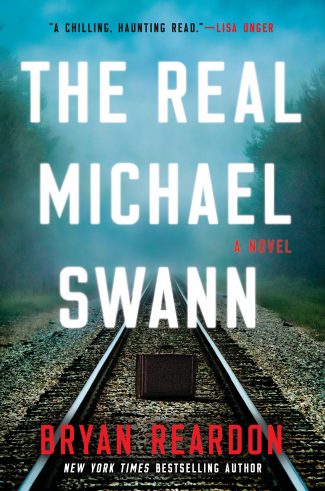 Part family drama, part tragic love story, and part disaster narrative that hits terrifyingly close to home, The Real Michael Swann by Bryan Reardon is a deftly plotted suspense novel with an unflinching portrait of a marriage at its heart, challenging us to confront the unthinkable—both in our country and in our own homes.

Imagine finding out that a loved one might have died in a terrorist attack. Imagine, then, that your loved one is accused of the crime. That’s what happens to Julia Swann in Bryan Reardon’s unputdownable thriller. Michael Swann is at an increasingly crowded Penn Station after a brush fire delays the trains. He’s trying to get home, but it’s proving difficult.

“It looks bad,” she said. “Have you thought more about getting a car?”

“I called around.” He said, louder. “Sounds like people beat me to it. I might just get a room. Would that be ok?”

He paused. “The Paramount might not be too bad.”

Julia immediately regretted what she said. A few months before, she would not have mentioned it at all. Yet uncertainty had crept into her thoughts, and suddenly $300 sounded like a lot of money for a hotel room.

“But … whatever you want to do is fine. I mean, if everything works out, we’ll be fine.”

She heard what sounded like a bark. She blinked.

In the midst of Michael’s sentence, the line went dead.

If you sense a bit of tension between them in their conversation, you’d be right, but it pales to what comes next. Soon, Julia finds out that a bomb has been detonated in Penn Station. Hundreds are dead, much of Madison Square Garden has collapsed, and Julia is desperate to know what happened to Michael.

She is also, refreshingly, completely unsure how to handle the situation with her boys, Thomas and Evan, who are 12 and nine. In the heat of the moment, she even fakes a phone call with Michael after the kids see the news on TV. She doesn’t want them to panic, and it’s the only thing she can think to do. She’s immediately sorry for the decision, but I really think the scene will especially resonate with parents—those of us that, half the time, are just flying by the seat of our pants, especially in situations where we have absolutely no previous context to help us deal with them. It’s a heartbreaking little scene:

Julia did not know what to say. She didn’t know what to do. No thoughts formed. No decisions. She needed to feel this, to comprehend and process what she had heard on the television. At the same time, she had to be there for the boys. She couldn’t be herself. She had to be someone else, someone above this. Someone who could remain calm. Could handle this. She had to do that for Evan, and for Thomas.

She dialed Michael’s number. It went directly to voicemail. She looked into Evan’s eyes. She didn’t see the pain and fear. Instead, she felt it deep inside her own heart. Her own soul. And she did something then that could never be undone.

Julia then leaves the kids with a friend and goes into the city to search for Michael, whom she’s convinced is alive. While there, she largely relies on the kindness of strangers to help her, and they do help. In fact, Reardon paints a pretty convincing picture of the aftermath of a terrorist attack. It’s chaos, and not everyone is friendly, but people do go out of their way to help Julia and show her small acts of kindness—which, in her frantic state, threaten to just about unravel her. For example, she nearly comes apart after someone in a print shop designs and prints hundreds of MISSING flyers for her for free.

Woven in with Julia’s search for Michael is the story of their lives, from their first meeting to dating, marriage, career changes, children, and finally, to the days and months leading up to his trip to NYC. Reardon is great at highlighting the small and large dramas of marriage, noting that even the most “perfect” relationships are rarely completely so. He also weaves in the stress that the current political climate has put on relationships of all kinds (particularly notable since Julia was in politics when she was younger).

There is another narrative in play, but to reveal that one could lead to Spoilerville, and the twist in this one is pretty good. Perhaps unsurprising but still a good one. This is just an overall riveting book, and it works as a thriller, a mystery, and an astute autopsy of a marriage, not to mention a well-drawn family drama. Nicely done.