Review: The Piranhas by Roberto Saviano 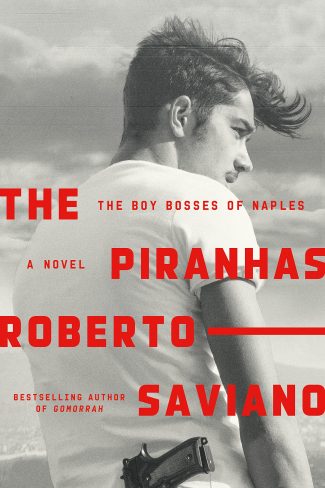 The Piranhas by internationally bestselling author Roberto Saviano is a novel of gang warfare and a young man’s dark desire to rise to the top of Naples’s underworld.

Roberto Saviano is one of the best contemporary international crime authors, and The Piranhas is further proof that he belongs in any list of outstanding crime writers. Heartfelt, brutal, poetic, and packed with violence, The Piranhas is a narrative that drops readers in Naples and then gets them so in touch with the daily lives of its cast of characters that their actions, and their consequences, become inescapable. Simply put, this is an epic novel about wanting to grow up to be the biggest bad guy and the nightmares that can be found on the road to achieving that dream.

Nicolas Fiorillo is a smart 15-year-old from the slums of Naples. He can get by in school with minimum effort and could achieve greater things there if he tried, but his thoughts and efforts are elsewhere: He wants to make his mark in the local crime scene and get the money, recognition, and power that come with it. Pursuing this vision with him are nine friends, all of whom join him as he sets out to create a new gang, a paranza, after the momentary collapse of the local boss. The youngsters roam the streets on their motor scooters, sell drugs, and commit robberies as they learn to navigate the intricate ways of the streets in hopes of earning a place in the network of local small-time gangsters that control their neighborhoods.

On their way to criminal stardom, they acquire an old gun, get familiar with death, and learn to cheat and steal as they work their way up to better guns and bigger jobs. Eventually, they start gaining control of small areas and making alliances with old mafia bosses, all of which hinges in Nicolas’s sharp brain and dedication to his dream—even when death and chaos surround him and become an integral part of the equation.

The Piranhas is more than a good crime narrative. Saviano takes his time constructing a story in which the cultural elements of Naples are as part of the narrative as the characters. Their practices, dialect, history, beliefs, and streets of Naples are all very important and intrinsically tied to the action in ways that shape the characters from the start. Nicolas is a special, memorable character, and part of that comes from his roots and the way his thinking is shaped by the realities of the culture that surrounds him:

If you’re from lower Naples, you have to go out and fight for respect. The comrade might talk about moral categories but to Nicolas, who’d just seen a few pictures of Mussolini and a few old film clips on TV, the words moral category no real meaning, and so he’s slammed a head butt into the guy’s nose, as if to say: here, let me explain it to you this way, you jackoff, you don’t know what you’re talking about. Just and unjust, good and bad. They’re all the same. On his Facebook wall Nicolas had lined them up: the Duce shouting out a window, the king of the Gauls bowing down to Cesar, Muhammad Ali barking and his adversary flat on his back. The strong and the weak. That’s the only real distinction. And Nicolas knew which side he was on.

One of the many elements that makes The Piranhas such a strong novel is that, unlike most contemporary crime fiction, it delves deep into the beginning of a life of crime. While most novels give readers fully formed criminals and, in many cases, don’t even bother to offer a bit of background or discuss the actions and circumstances that lead them there, Saviano takes a very different approach. In fact, the entire novel is about kids on the edge of manhood learning the ways of the streets and growing into something that their birthplace more or less prepared them for:

They had the faces of children who already knew everything, they talked about sex and guns: no grown-up, since the day they were born, had judged any truth, fact, or behavior unsuitable for their ears. In Naples there are no paths to growing up: you’re born straight into reality, into the thick of it, you don’t get a chance to discover it a little at a time.

Lastly, there is one more element that separates this novel from most contemporary crime fiction: language. It seems like Saviano worked hard to achieve a balance between Italian and dialect, and translator Antony Shuggar surely added a bit of explanation to the narrative in his translation. The result of this is a story that carries with it the rhythm and linguistic identity of its source, the unique turns of phrase, sayings, terms of endearment, and even insults of lower Naples. Most of it is offered also in translation (sometimes unnecessarily), but there are passages in which there is no direct translation, although the words used are understandable in context. This use of language adds a layer of authenticity to the text and keeps readers deep in the culture of the place:

This marked the beginning of the season of the stese, a term in dialect that describes Camorra rampages. Terrorizing the public was the cheapest, fastest way of laying claim to any given territory. The era of power in the hands of those who had taken command of the territory alley by alley, vicolo by vicolo, alliance by alliance, man by man, was over. The approach now was to flatten them all. Men, women, children. Tourists, shopkeepers, longtime residents of the quarter. The stesa is democratic in that it makes anyone in range of the bullets duck for cover. And it’s simple and not especially demanding to organize. All you need, in this case, too, is a single word.

The Piranhas is dark and violent, but there is also beauty in it that comes from the camaraderie and young love that permeate the narrative. This is a book in which characters do bad things for all the wrong reasons, but that somehow doesn’t detract from their likability. Saviano—a household name to most international crime fans thanks to the success of his previous effort, Gomorrah, and the TV series it became—is once again in fine form here, and fans of strong, character-driven crime will find much to celebrate in this gripping, entertaining, distinctive novel.