Review: The Pint of No Return by Ellie Alexander 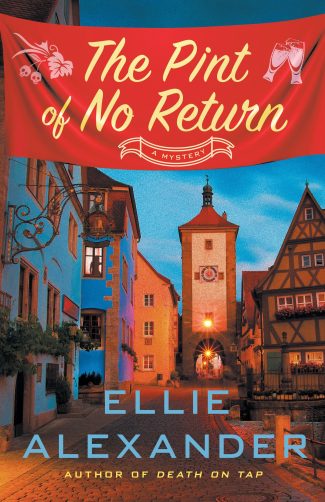 The Pint of No Return

The Pint of No Return marks the second installment in Ellie Alexander’s Sloan Krause Mystery series and returns readers to Leavenworth, Washington, aka “Beervaria,” where craft brewer and amateur crime sleuth Sloan Krause is drawn into helping solve another murder, that of an obnoxious beer film documentary host who turns up dead on Oktoberfest eve.

Read an excerpt from The Pint of No Return!

The Pint of No Return by Ellie Alexander opens on Oktoberfest eve in Leavenworth, Washington, a real-life picturesque mountain town in the Pacific Northwest reinvented as a mini Bavaria — or “Beervaria” — complete with Alpine storefronts, polka bands, craft breweries with tasting cellars, and locals clad in lederhosen and dirndl. Standing out amidst the kitsch is craft brewer and amateur crime sleuth, Sloan Krause. Though passionate about the community, down-to-earth Sloan is adamant about sticking to her practical uniform of t-shirt, jeans and brewer’s boots.

The town, and Sloan, are thrown off kilter when Hollywood comes calling just as the annual Oktoberfest street fair is about to kick off. The documentary film team includes C-list celebrity Mitchell Morgan, the host of “Wish You Were Beer.” In his short time in town, the obnoxious Mitchell manages to offend almost everyone, ensuring plenty of suspects when he’s found murdered later that night.

The story gets off to a bit of a slow start (the murder doesn’t happen until chapter six) as the author catches us up on the town’s history (there was a previous fictional murder in Death on Tap) as well as Sloan’s. An orphaned foster kid, she was taken in by kindly German brewers Otto and Ursula Krause, owners of Der Keller. Wanting to be part of their warm, loving family, she went on to marry their son, Mac.

Now, nearly 20 years later, she and Mac are separated and headed for divorce after she caught him cheating with a 20-something barmaid. Feeling adrift, Sloan has begun a quest to find her birth mother, her sole clue a grainy photograph of a woman holding a dark-eyed, dark-haired little girl that just might be Sloan.

Though Sloan holds a one-third stake in Der Keller, preemptively divvied up by Otto and Ursula to prevent the impulsive Mac from running the business into the ground, her need for space from Mac has led her to take a job at a startup microbrewery, Nitro. Nitro is owned and operated by Garrett Strong, a former engineer from Seattle and Sloan’s potential love interest, assuming she can bring herself to finalize the break with the loutish Mac. In the interim, watching Sloan and Garrett dance around each other in the close confines of the Nitro bar and brewery makes for fun fare as well as a timeout from the town’s cast of characters, notably dirndl-dressing realtor, April, Leavenworth’s self-appointed ambassador and Sloan’s nemesis, whose over-the-top antics frequently cross over to slapstick.

Despite the ongoing murder investigation, the Oktoberfest celebrations proceed full-swing. The tented street fair provides plenty of opportunities for Sloan to observe and question a growing roster of possible suspects. Throughout the festival weekend, more and more townspeople and movie crew members appear sweaty, slurring and swaying. Too much of the malt perhaps, or is something more sinister afoot?

A female brewer as a sleuth makes for a refreshing change of pace from the usual cozy mystery fare. The author obviously knows a lot about the brewing process, research that’s ably integrated into the story. The tension between Sloan’s status as a respected member of this tight-knit, predominately German-American community and her foster kid past and possible Greek heritage adds further depth to the character. Her search for her birth parents and the reason why she was given up (scrubbed foster care files suggest a possible state-level coverup) promises to be an ongoing thread throughout the series.

Canny, capable and courageous, Sloan Krause is a protagonist for whom readers can’t help but root, and The Pint of No Return is a fun, zippy read that’s sure to leave series fans thirsty for the next installment.

Check out Ellie Alexander’s list of criminal acts against beer!

Hope C. Tarr is the award-winning author of 25 historical and contemporary romance novels. Irish Eyes, set in her beloved New York City, is her women’s historical fiction debut. Prior to launching her writing career, Hope earned a Master’s Degree in Psychology and a Ph.D. in Education, both from The Catholic University of America. She lives in Manhattan with her fiancé and their rescue cats and frequently can be found exploring the city’s historic sites and neighborhoods, green markets and parks, museums and art galleries, wine bars and restaurants—all inspirations for her novels.