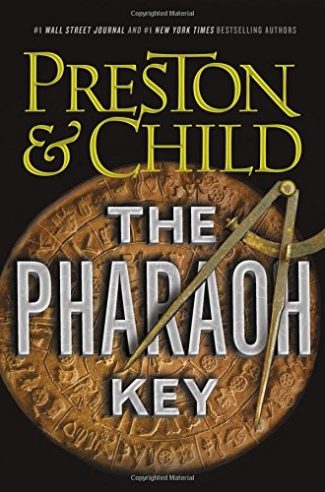 The Pharaoh Key by Douglas Preston & Lincoln Child is the fifth book in the Gideon Crew series—an exciting adventure in which the secrets of a mysterious ancient tablet may point the way to untold treasure … or unspeakable danger.

Gideon Crew has two months to live. His neurosurgeon, Dr. Conrad, points out that he at least knows how much time he has left: “Most of us don’t have that luxury.” Luxury? Seriously? Cue the eye-roll emoji. Conrad continues.

“When Warren Zevon, the rock star, knew he was dying of cancer, someone asked him how he was coping with that knowledge. His reply? Enjoy every sandwich. My advice to you is similar: don’t become miserable and paralyzed with grief and fear. Instead, do something worthwhile and engaging with the time you have left.”

So lean into life instead of sinking into a pity party. Is that it? Gideon steps out into a chilly March day in New York City, feeling none too good. Sure, he has more money than he can spend, but Glinn—his former boss at EES (Effective Engineering Solutions)—has disappeared, and he feels like he’s “without a friend in the world.”

His cell phone dinged and he glanced at it: a text from Manuel Gazra, second in command at EES. It read: Come to the office right away.

Garza. He had long had a difficult relationship with the man, a brilliant engineer who could be both prickly and cold-blooded. But the two had developed a rapport of sorts on their most recent assignment; he’d found that Garza wasn’t quite the ruthless human being he’d assumed.

Even if readers are new to the Gideon Crew saga, Preston and Child do an admirable job of bringing folks up to speed. Garza’s imperative command has a spine-stiffening effect on Gideon Crew. He’s not dead yet—and why did Glinn shut things down? In the words of Samuel Johnson, “Depend upon it sir, when a man knows he is to be hanged in a fortnight, it concentrates his mind wonderfully.” Crew is all in.

Manuel Garza is pissed—he wants to find an elusive treasure, “hinted at in EES’s final case, the long-awaited translation of a centuries-old stone tablet of a previously undiscovered civilization: The Phaistos Disc.” Using a clever sleight of hand, Garza extracts the needed information during a tense meeting in front of Glinn’s computer console.

Crew and Glinn have what they need: destination Hala’ib Triangle, Eastern Desert, Egypt. The contrast between New York City’s meatpacking district and Cairo is visceral.

Gideon gazed out at the waking city, cup of strong Turkish coffee in hand, breathing in the heady scent—car exhaust, dust, and the richness of the Nile itself, which lay like a sheet of blued steel in the distant light. They had taken a suite at the Ritz-Carlton at Gideon’s insistence—he’d banked closed to half a million dollars from his work at EES, and whenever he could he would make damn sure he enjoyed the two months that were left to him, no matter the cost. Garza, a born cheapskate, had grumbled a little but finally relented. It was just one of many disagreements they’d had in the five days since they’d hatched this plan—and getting to Cairo, Gideon knew, was the easy part.

Cyber challenges and inscrutable former bosses are in the rearview mirror. Their new enemies are weather, lack of water, topography, and local bandits and thieves.

When they finally reach their destination, Garza uses his engineering chops in an environment that’s pre-Industrial Revolution (to say the least). He’s like time-traveler Claire of Diana Galbadon’s Outlander series. Claire “knows” how problems are addressed in the 20th century, but how to translate that knowledge into a worthy work-around in post-Culloden Scotland—aye, that’s the trick.

Garza and Crew’s problem: “massive stone blocks moved by the ancient Egyptians” that prevent Crew, Garza, and their companion from getting into a cave that contains “The Pharaoh Key.” The solution is low-tech and ingenious. Trust a think-out-of-the-box engineer! First, hammer wood pegs into the stone. Then, soak the pegs with water.

“In a way. The magic of capillary action. The dry wood takes the water in through the capillaries and the pegs swell up. Presto—the rock splits.”

“Think so? This was a tried-and-true method of splitting rock for hundreds of years, in New England and elsewhere. It’s called water wedging. I estimate it will take two hours, maybe more.”

“Two hours?” Gideon asked, looking at the moon again. “We won’t have any time left for exploration!”

The Pharaoh Key marries high-tech chops with a rollicking Raiders of the Lost Ark-style adventure. Refresh your knowledge of Biblical mysteries, suspend your disbelief, and enjoy the treasure hunt.