Review: The Other Woman by Sandie Jones 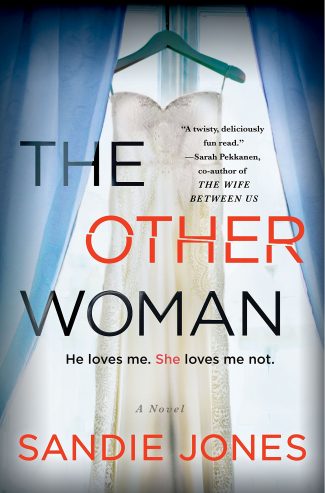 The Other Woman by Sandie Jones is a debut novel and the most twisty, addictive, and unputdownable thriller you’ll read this year.

Take a visual tour of The Other Woman with GIFnotes!

Sandie Jones’s The Other Woman is a shape-shifting novel that, much like its characters, never truly is what it seems. It starts as a lighthearted and humorous tale of newfound love and then slowly spirals into a tense, maddening tale of deception and repressed anger that has an unexpected, manipulative character at its core. In fact, there is almost nothing in the first 100 pages of the book that would indicate the narrative being read is a strong psychological thriller. Instead, Jones lures readers in with quirky characters and relatable situations before unleashing what she has in store.

Emily is in love with Adam. They have been dating for four months and are already sharing holiday meals with his family. In Emily’s eye, Adam is almost flawless and could easily be the chosen one, the man she grows old with. Unfortunately for them, there is someone else in their relationship: Adam’s mother. A gentle, older woman by the name of Pammie, Adam’s mother seems like a normal, caring mother—but there is more to her than that. It all starts with miscommunication and small acts of control. Then, it escalates. Is Emily imagining all of it? Can Pammie be as nefarious as she sometimes seems?

The Other Woman is not a standard psychological thriller. Its pace is much slower, and the few elements that tie most contemporary psychological thrillers to crime are almost nonexistent. The latter is no problem at all, but some readers could struggle with the former if they are accustomed to narratives in this genre moving forward at breakneck speed. For example, as mentioned above, the first third of the book is spent showcasing the budding relationship—including how they met—and getting to know Emily as she discusses her life/relationship with her friends. Despite this shortcoming, the novel ends up being a solid debut for two reasons: the psychological and emotional turmoil Emily undergoes and Jones’s knack for dialogue. Also, the way the tension crescendos is worth mentioning. It all starts with noticing a few small things and escalates from there:

There was the tiniest frisson of anger bubbling up inside me and, if I hadn’t had too much to drink, I most probably would have left and driven home. Had I known that James would be here, and that I’d be expected to sleep on an old sofa, I would have stayed with my parents. I wanted to be with Adam, and I thought he wanted to be with me, but here I was, having to pander to his mum’s needy behavior and defend myself.

While Emily and Adam share the spotlight, it is Pammie who ultimately emerges as the most memorable character. She is never entirely sweet and is controlling from the start, but by the last third of the novel, things that happened earlier take on a somewhat more sinister shade when seen under the light of new revelations. In a way, Pammie doesn’t grow or change; she is the same monster from the first few pages, but the way that monster is slowly revealed makes for some very interesting reading.

Read an excerpt from The Other Woman!

If the pace is not great, Jones makes up for it with heavy doses of mental anguish, frustration, and anxiety. Emily is a tad insecure, and that makes her think about everything too much. She makes excuses for Pammie at the start. Then, she sees what’s going on (or at least what she’s sure is going on) and puts up with it in the name of love and not coming between her beloved and his mother. Later still, she is forced to face her rival without the benefit of other possibilities to cushion their interactions, and that’s when she gets abused, threatened, and even triggered:

I smiled as if her vicious words were rolling over me like water off a duck’s back, but every syllable was like a sword cutting through the very strings that held my heart in place. I felt as if I had gone back in time, been transported back to primary school, to when nasty Fiona had loomed over me in the corner of the playground, and had laughed as I lay sprawled on the ground, my blue gingham dress caught up around my waist.

Ultimately, The Other Woman is a novel about questions. What happened before? What will happen next? What is Pammie capable of? What has she done in the past? That uncertainty, coupled with a twist that should be left for readers to discover, makes this a strong debut that announces the arrival of an author who isn’t afraid to let her narrative comfortably inhabit an interstitial space between fear and love.

Want more of The Other Woman? Check out the entire Life of a Book series!