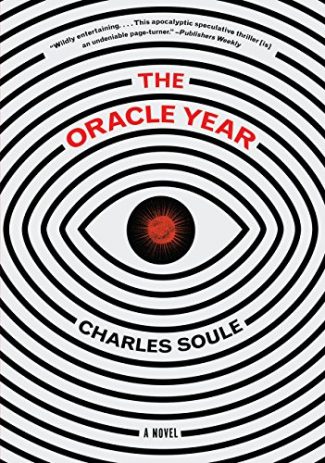 From bestselling comic-book franchise writer Charles Soule comes The Oracle Year—a clever and witty first novel of a twentysomething New Yorker who wakes up one morning with the power to predict the future.

Crime stories are often about power: how it’s used, how it’s abused, and how far a person will go to get it. That’s part of the reason they blend so well with elements of fantasy fiction like seemingly supernatural powers. When a person gains a paranormal ability, old power structures are threatened locally and sometimes globally. These types of stories of people gaining powers are a lot of fun to read, but what makes them truly special is the same thing that makes any good story: the characters and the choices they make. That’s something Charles Soule understands and demonstrates on a regular basis as the writer of several of Marvel Comics biggest titles as well as his creator-owned comics. In his debut novel, The Oracle Year, he brings his knack for character-driven fantasy fiction to the medium of prose, and the result is a riveting narrative with a huge scope and scale and a fascinating cast.

The Oracle Year is the story of Will Dando, a New York-based aspiring musician who one day wakes from a dream with 108 specific predictions for future events and how he uses his newfound gift for precognition. Will is a very human character who is flawed but overall good and decent. That’s part of the reason Soule’s story is so fun to follow. We see Will struggle with his gifts and root for him as he tries to improve his life and wrestle with the call of using his power to help others. It can be a lonely journey for him at times.

That doesn’t mean Will is alone, though. Soule populates his novel with a pretty great supporting cast, including Hamza, a former Wall Street banker and Will’s best friend, who tries to help him monetize his gift; and Hamza’s wife, Miko, who is an empathetic elementary school teacher. They’re there to help Will on his journey. But much of the supporting cast of The Oracle Year are there to hunt him down, uncover who he is, and end his influence in the world. That’s because when the novel begins, the titular Oracle is a shadowy figure with a website that’s given him worldwide fame.

One of my favorite cast members hunting Will is a woman known only as “The Coach,” a clandestine, badass, and utterly ruthless fixer known for solving the problems of powerful figures and institutions. She’s given a great introduction that makes it clear she’s not above cultivating an image that makes people underestimate her, and it makes later scenes with her resonate even more:

Leuchten considered the Coach, deciding that she reminded him of Bea Arthur. High-cheekboned face surmounted and defined by a thin, aquiline nose like half an isosceles triangle. Sharp, clear, blue eyes behind rimless spectacles, with that smile powering the whole thing. Overall, it gave the impression that under her puffy winter coat, she was wearing a t-shirt that said WORLD’S BEST GRANDMA.

Soule also demonstrates some fantastic and realistic worldbuilding skills, with opening scenes that establish the influence of the Oracle’s website and why people like The Coach are hunting him. Many of those scenes are from the perspectives of other characters. For example, this scene from the point of view of Leigh Shore, a lifestyle reporter with dreams of tackling hard journalism:

The site emerged into the public consciousness so quickly it was like a UFO appearing over Washington. From one day to the next—one hour, it seemed as she remembered it—it became the only thing anyone could talk about.

Twenty events all accompanied by dates. The first two had already happened by the time the Site went viral, but the rest all were slated to occur in the future. Since then, four more of those dates had passed, and on each, the event on the Site occurred, exactly as it described. Or more accurately, predicted—by an unknown person, presence, supercomputer, or alien that had become known as the Oracle, in the same way the Site had become the Site.

The anonymity and influence of the Oracle doesn’t just draw the attention of governmental figures. It also attracts the scrutiny of religious ones, as well, who are concerned with the rise of a new prophet. A couple of these characters play the role of antagonists, but to Soule’s credit, they are not one-note, fanatical villains. They all have some sort of nuance that makes them interesting and human.

We see the actions and influence of the Oracle through their eyes and the perspective of a number of people around the globe. Some of them mundane, some of them altruistic, and some of them opportunistic—like this man from the Republic of Niger, who claims to be the Oracle:

“My name is Idriss Yusuf. And yes, I am the Oracle,” the man said, his chuckles tapering off. “I was able to predict the day a small plane would crash near here. It was full of supplies stolen from a United Nations outpost in Burkina Faso. My village has been eating well ever since. And now, people come to me with their questions about what tomorrow will bring, and I do my best to answer them.”

Soule is great at bringing to life these international scenes and interludes, and he’s even better at pacing. The Oracle Year has some stunning and very organic twists and turns. One of them injects the novel with high stakes that gives the story extra momentum.

If you’re a fan of Charles Soule’s comic work, like I am, it should come as no surprise that he’s able to tell a great prose story as well. And if you’re coming to his work for the first time with The Oracle Year, prepare yourself! You’re about to read an incredibly fun and stunning debut novel.